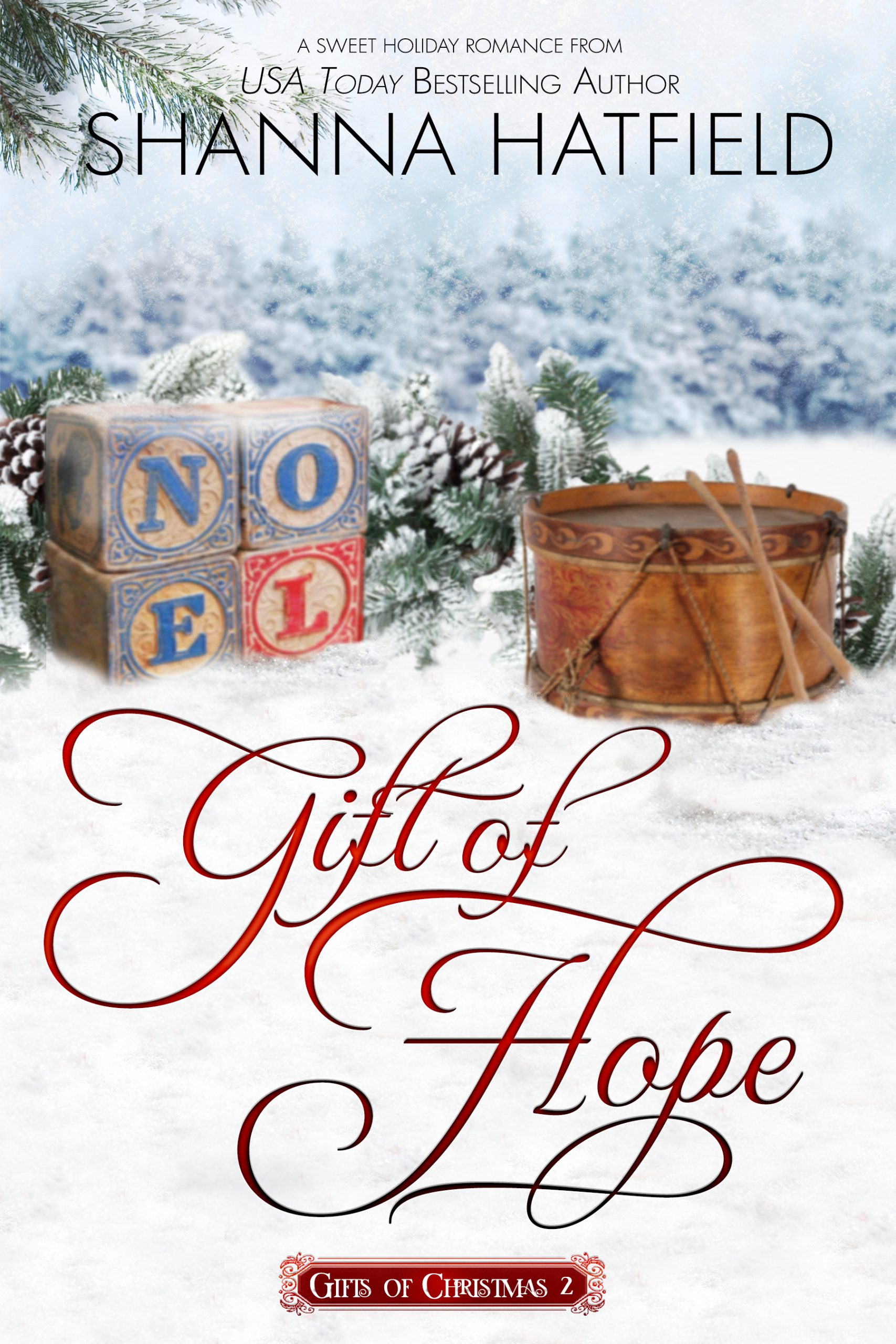 A tender gift given

Can warm even the coldest heart . . .

When his affections are spurned by the girl he plans to wed, Graydon Gaffney rides off in the swirling snow, determined to stay far away from fickle females. Then a voice in the storm draws him to a woman and her two sweet children. Despite his intentions to guard his emotions, all three members of the DeVille family threaten to capture his heart.

Giavanna DeVille holds the last frayed edges of her composure in a tenuous grasp. In a moment of desperation, she leaves her sleeping children in her cabin and ventures out into a storm to release her pent-up frustrations where no one can hear her cries. Much to her surprise, a man appears through the blinding snow. He gives her a shoulder to cry on and something even more precious. . . hope.

Can the two of them move beyond past heartaches to accept the gift of hope for their future?

Gift of Hope is the second book in the Gifts of Christmas series, a collection of heartwarming, wholesome historical romances, featuring precious gifts given straight from the heart.

Praise for Gift of Hope

“Old friends,rambunctious children and a beautiful written story of caring,helping people and the hope that warmth and food and family bring to life. Plus Christmas surprises. A++!”

“Gift of Hope, just as the title implies, gives a Gift of Hope reading this book. “

“Gift of Hope is a heartwarming and moving romance. Delightful characters and story make it the perfect holiday read.”

“You should take this,” she said, handing him the box of chocolates he’d left that morning. It hadn’t been opened.

“Don’t mind if I do,” he said, opening the box and hunkering down so Matty and Gwennie could look at the chocolates. “Which one do you think would be the tastiest morsel?” he asked the children, although his gaze locked on Mrs. DeVille’s tempting lips. In spite of her frown, they still appeared entirely kissable. Far too kissable if the tingle of his mouth and the increasing desire to taste her lips was any indication.

“That one,” Matty said, pointing to a piece of candy in the center of the box.

“Have at it.” Grady held the box out to the little boy. Not to be left out, Gwennie snatched one and stared at it. “Go on, sweetie. Take a bite,” he said, motioning for her to taste it.

“You take one, too, Mr. Gaffney,” Matty said, still holding the treat in his fingers.

“Which one should I choose?” he asked, pretending to look over the selections.

“That one,” Matty said, pointing to the largest piece of candy in the box.

Grady lifted it out then set the box on the table. “Shall we take a bite on the count of three?”

Matty and Gwennie both nodded their heads in agreement.

“One, two, three!” Grady lifted the chocolate to his mouth and took a small bite, more interested in the looks on the children’s faces as they ate their candy than eating the sweet. He had to guess it was the first taste of chocolate Gwennie had experienced. Her eyes twinkled in delight and she greedily shoved the rest of the candy into her mouth.

Grady chuckled and ruffled Matty’s hair when he did the same as his sister. He turned to Mrs. DeVille and held out the piece he’d taken a bite from to her lips.

“No, thank you,” she said, attempting to appear indifferent.

“Oh, just give it a try,” he said, making sure he blew a chocolate-scented breath her way. She stiffened and started to turn away, but Matty grabbed her hand.

“Please try it, Mamma. It tastes so good.” Her little boy gazed up at her with a pleading look.

“Very well,” she said with a beleaguered sigh. She reached for the candy, but Grady had no intention of relinquishing it. Instead, he held it to her mouth again, lightly brushing it across her plump bottom lip.

Her gaze clashed with his and he felt something shift inside him. Something unexpected and monumental. She opened her mouth and he gave her the bite, acutely aware of the feel of her soft lips as they touched his finger. He felt as though he’d dipped his hand into a bucket of hot coals as heat seared up his arm. His reaction was unsettling, something he’d never experienced.

And because he’d seemingly misplaced his good sense as of late, he couldn’t help but long to experience it again.