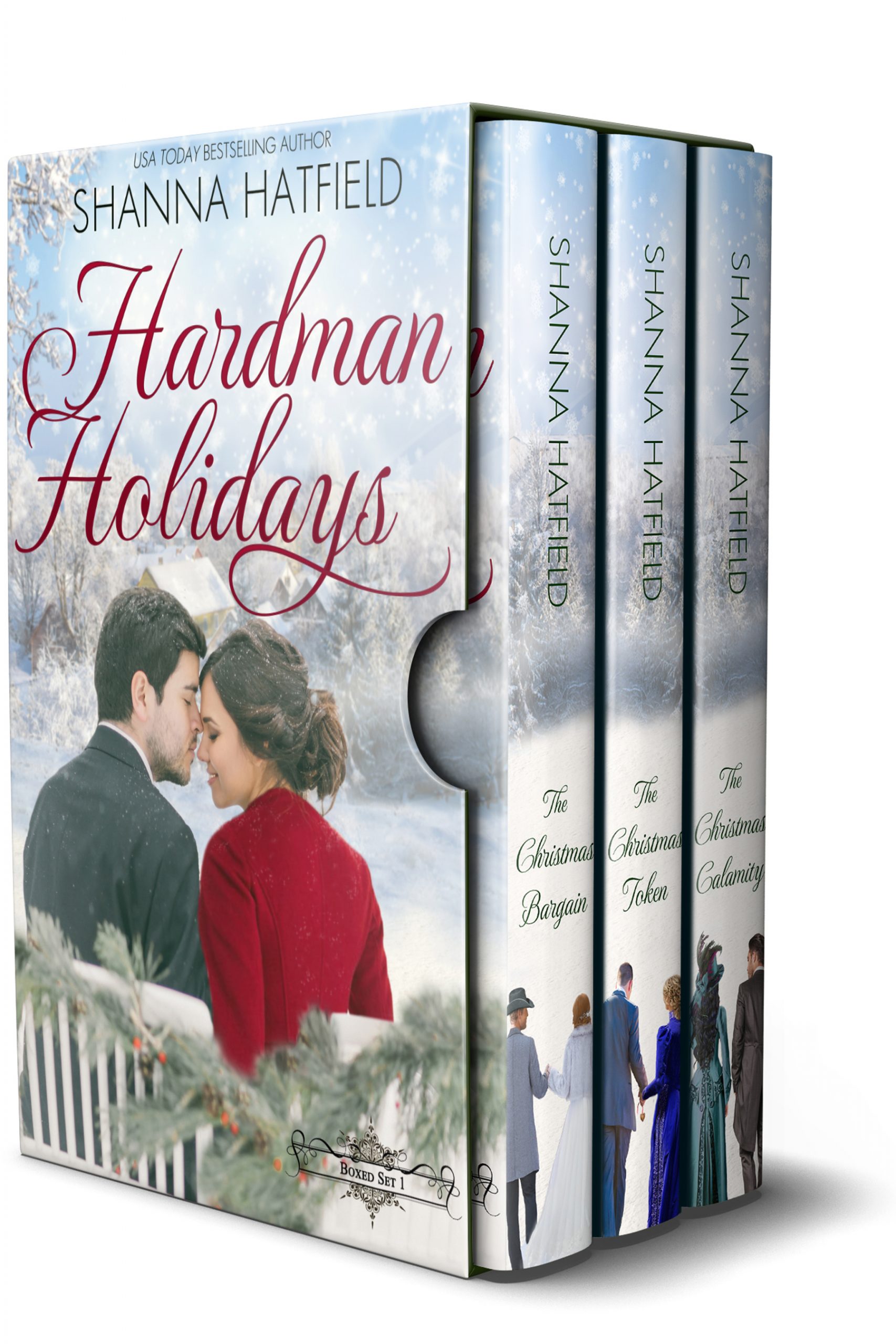 Looking for an old west fairy tale wrapped up in a sweet holiday romance?

This boxed set contains three full-length historical romances from the Hardman Holidays series including The Christmas Bargain, The Christmas Token, and The Christmas Calamity. Wholesome and heartwarming, each book offers messages of love and faith, family and hope, with plenty of humor and Christmas cheer.

The Christmas Bargain – Luke Granger might own Hardman’s bank and the fanciest house in the Eastern Oregon town, but he’d much rather be outside riding his horses or wrangling his herd of cattle than keeping his account books straight. In a strange, unsettling turn of events, he hesitantly accepts a farmer’s daughter instead of money to cover a loan. If the man hadn’t threatened to sell her to the saloon owner, Luke would have refused to take her. He has no idea what to do with shy, lovely Filly or their marriage of convenience, but he’s about to get far more than he bargained for.

The Christmas Token – Blake Stratton enjoys a simple existence in the small western town of Hardman as a carpenter. With honest work and loyal friends, his life is nearly perfect, at least until the day Ginny Granger arrives, setting him on his ear and upending his life. Infuriated by her meddling presence, he’s further exasperated to discover he isn’t immune to her considerable charms.

The Christmas Calamity – Dependable and solid, Arlan Guthry relishes his orderly life as a banker’s assistant in the small town of Hardman, Oregon. He has good friends, a great job, and the possibility of marriage to the town’s schoolteacher. His uncluttered world tilts off kilter when the beautiful and enigmatic prestidigitator Alexandra Janowski arrives in town, spinning magic and trouble in her wake as the holiday season approaches.

“If you’re looking for a touching, charming Western Historical Christmas Romance this season, then I’d recommend The Christmas Bargain. Perhaps, like me, you’ll be tempted to check out the rest of the series as well.”

“This book was everything that I expected and even more, the details that were added made me feel like I was really in the 19th century with the characters. I loved this story and I will be more than willingly to read it again in the future.”

“Shanna Hatfield is a name I want to remember so I can read more of her books. This was the most fun, exciting reads EVER!”

Leaning against him, she buried her face against his broad chest. “I don’t know how to kiss,” she whispered.

He couldn’t hear what she said with her face muffled against his shirt. As he pushed her back, he smiled down at her. “Let’s try again. What did you say?”

Her face flamed with color and she looked down at her shoes, instead of into his face. As she released a deep breath, the words burst from her in rapid succession. “I said I don’t know how to kiss. Therefore, it would be nearly impossible for me to do as you asked.”

“In that case…” Once again, he forced her chin up so she had to look at him. He cocked his head to one side and pretended to study her. “I think we need some lessons.”

“Lessons?” she asked, confused. “What are you talking about?”

“Kissing lessons.” Luke drew her closer into his arms. “I’m going to give you kissing lessons. When I feel you have mastered the art, then you’ll be expected to carry out my wish of a kiss whenever I come home. This may involve some practice on your part.”

“Practice? Luke, you’re teasing me again, aren’t you?” A smile brightened her face.

“I’m not teasing in the least. I’m quite serious about this.” He tightened his arms around her and bent his head so their lips were only a whisper apart. “In fact, I believe we should start your first lesson right now.”