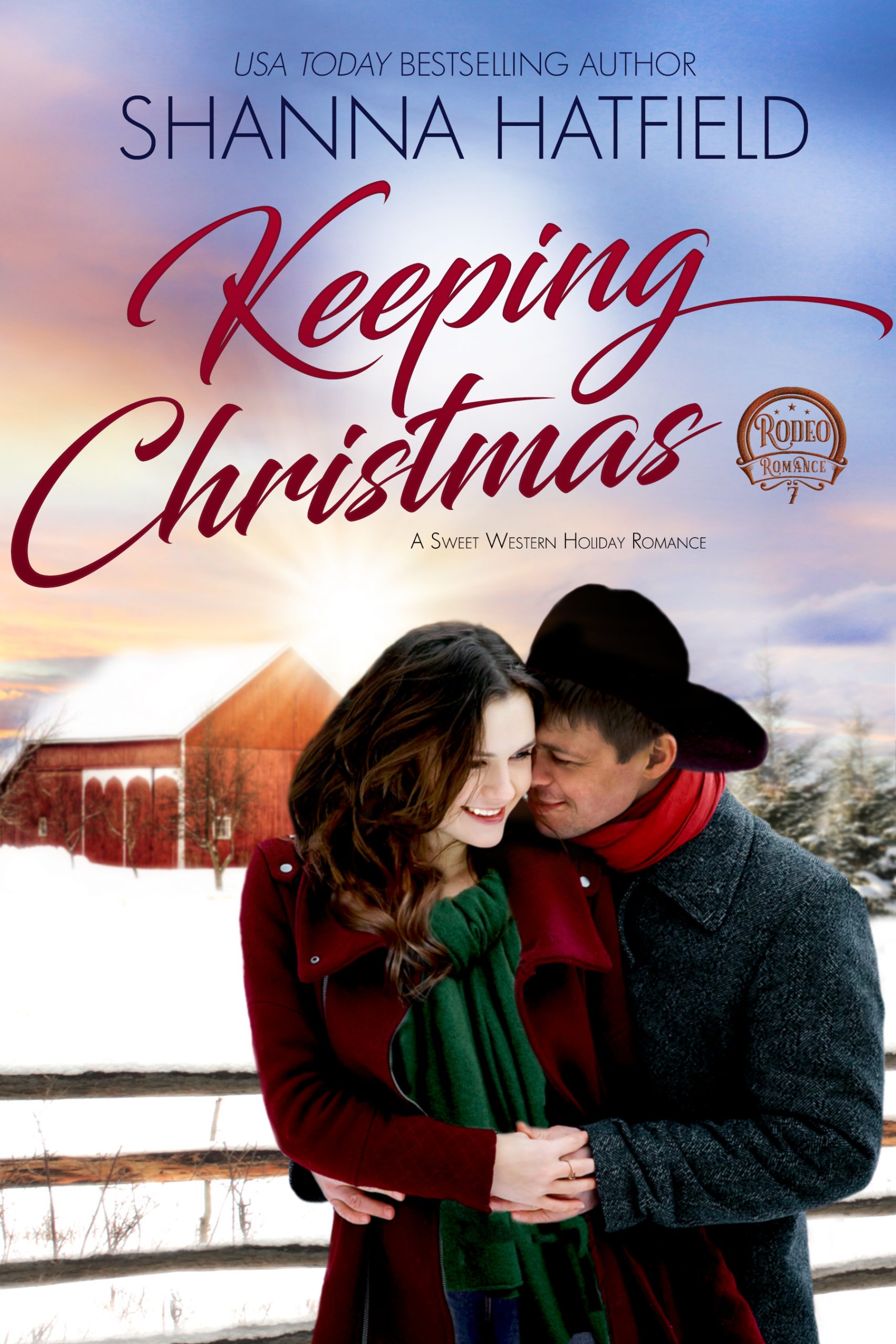 A promise made is a promise he’ll keep.

Even if it costs him the woman he loves…

Tally King thrives on her work as a nurse, until she ends up caring for her injured brother and his best friend on the family ranch. Between the two stubborn men determined to prove how tough they and the unpredictable antics of her loony aunt Marvella, Tally feels like her life is spiraling out of control. Or maybe it’s due to falling head over heels in love with Gage the first time they met.

An uplifting, sweet romance full of humor and hope, Keeping Christmas follows an unlikely couple as they discover the magic of Christmas and the wonder of true love.

“This book is such a fun read just downright hilarious in places. LOL has new meaning now since I finished this book for I literally ‘Laughed Out Loud’ at times… Keeping Christmas will by far hold a most special place in my Heart.  Shanna Hatfield can write Christmas stories that warm the heart with kindness, love that shows the true meaning of Keeping Christmas.”

“I loved these characters especially Aunt Marvella who had me laughing out loud and in stitches! It was a story about the value of good friendship, to listen to others rather than believe our warped thoughts on our self image and of course the path of true love. I couldn’t put it down and totally recommend this book.”

There was no way on earth or beyond she was going behind the chutes. The last time she’d done that had cured her on rodeos and rodeo cowboys for life. She had no intention of repeating the experience. The very thought of going back there left her thoroughly disturbed.

She sent a text to Gage, telling him to meet her near the ticket booth. It was only after she hit send that she realized she should have mentioned she was the one there, not Trevor.

Gage would figure it out soon enough, she supposed.

She leaned against the corner of the ticket booth, out of the way, and watched the faces of those coming and going. Through the crowd, she caught a glimpse of a face that looked familiar as a cowboy jogged her way.

Tally sucked in a gulp of air, unprepared for how much Gage had changed since she’d last seen him in person. The boy she’d had a crush on had morphed into a very handsome man. His dark brown hair was shorter, his shoulders broader, his body a finely-tuned machine of muscle. She noticed a scar on his right cheek that hadn’t been there before, yet it only added to his rugged appeal.

But his eyes were the same magnificent shade of blue, and his lips still appeared incredibly kissable. When he looked at a little girl wearing a pink tutu over her denim overalls, his grin kicked up the left side of his mouth just as she remembered.

He didn’t appear to have gotten taller than his already six-foot height, but he looked stronger and more capable than he had all those years ago.

Tally noticed several women eyeing him as he made his way through the crowd. He didn’t even seem to notice them as he scanned the faces, no doubt searching for her brother. She stepped away from the ticket booth and headed toward him.

She tried to catch his eye, but he looked right past her, as though she didn’t exist. Not that it surprised her. Guys like Gage weren’t interested in girls like her — girls who would never be mistaken for a model, had brains in their heads, and held to an unyielding set of morals.

Nope. There was nothing about her that would be of the slightest interest to a cowboy like Gage.

Tally waited until she was standing directly behind him to tap him on the shoulder.

“Gage Taggart,” she said in a voice she used to subdue unruly patients. He jerked and turned around to stare at her.

She could see him struggling to pull her identity from his memories. Insulted he hadn’t yet figured out who she was, someone jostled into her and she bumped against Gage. Something electric and completely unexpected arced between the two of them. Tally wanted no part of whatever it was and moved back.

Eager to get the torturous errand over with, she held the gear bag out to him. “Trevor sent me with this.”

“Where’s Trev?” Gage asked, taking the bag and looking around like her brother might suddenly materialize. “Who was I texting a minute ago if it wasn’t him?”

“That would be me. I’m sure you don’t remember, but I’m Trevor’s sister.”

“Tally? You’re little Tally?” He held his hand down near his waist, indicating the height he thought she should be.

She nodded and Gage broke into a wide grin.

“You were always such a cute kid with those big gray eyes, sturdy little legs, and chubby cheeks.” He reached out and playfully pinched her cheek. “You haven’t changed a bit. Aren’t you like, fifteen, maybe sixteen?”