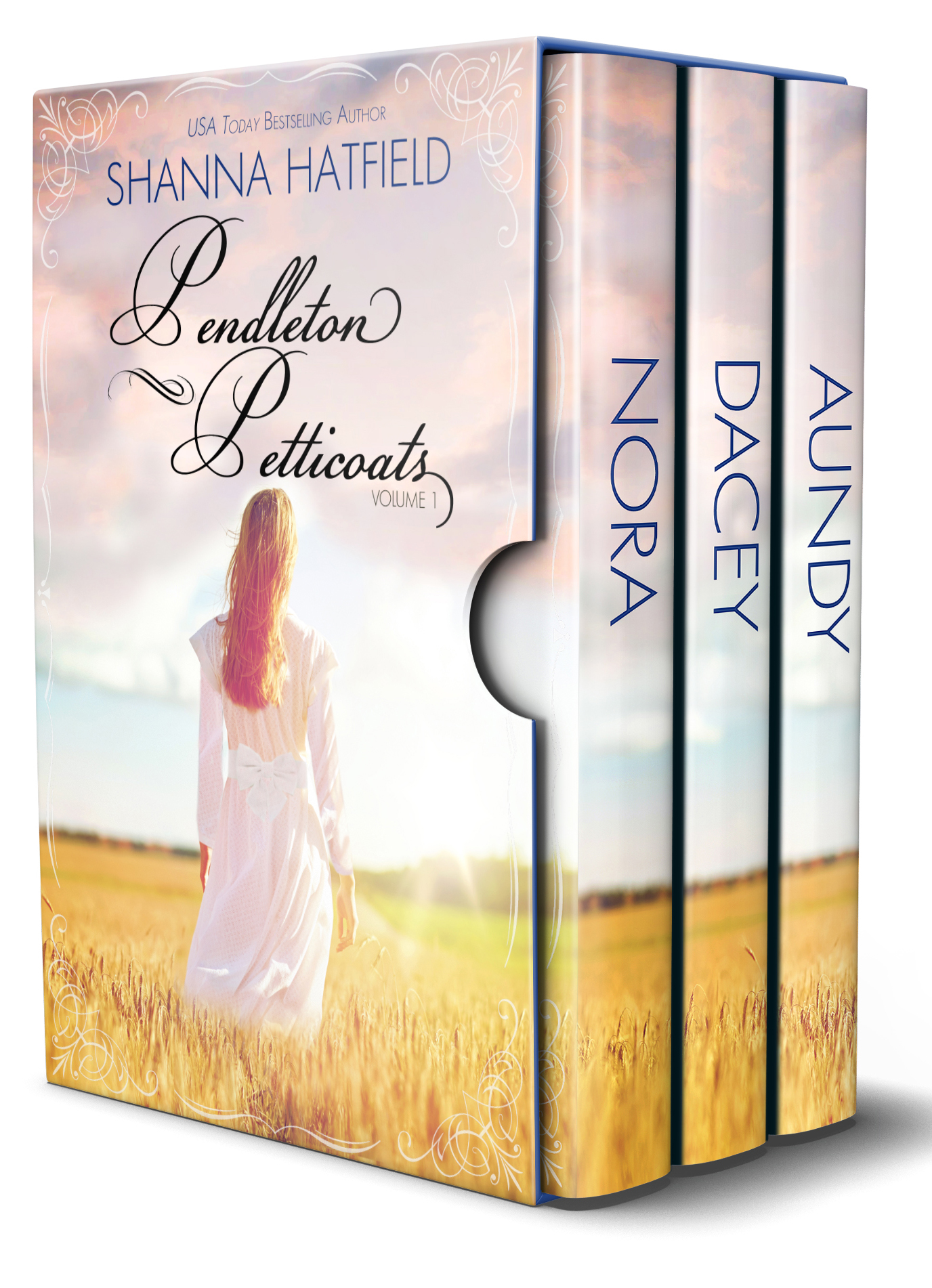 Indulge in the romance of a bygone era with three incredible pioneer women.

This boxed set contains two novellas and a full-length historical romance from the Pendleton Petticoats series including Aundy, Dacey, and Nora (Gift of Grace). Strong-willed, courageous women encounter the men who capture their hearts in these sweet western romances full of heart, humor, and hope.

♥ Nora – Ready to begin a new life far away from the dark memories of the Civil War, J.B. and Nora Nash head west and settle into the small community of Pendleton, Oregon. A devastating tragedy leaves them at odds as they drift further apart. Nora blames J.B. for her unhappiness while he struggles through his own challenges. Together, will they discover the gift of grace and rekindle their love?

♥ Dacey – A conniving mother, a reluctant groom, and a desperate mail-order bride make for a lively adventure. Dacey Butler arrives in North Carolina only to discover Braxton Douglas, her would-be groom, has no idea his mother wrote on his behalf, seeking a bride. Braxton has his work cut out for him if he plans to remain unaffected by the lively, lovely Dacey. Will the promise of hope be enough to keep her from leaving?

♥ Aundy – Desperate to better a hopeless situation, Aundy Thorsen leaves behind city life to fulfill a farmer’s request for a mail-order bride. A tragic accident leaves her a widow soon after becoming a wife. Aundy takes on the challenge of learning how to manage a farm, wrangle demented chickens, and raise sheep, even though her stubborn determination to succeed upsets a few of the neighbors, including Garrett Nash. Will she prove to him that courage sometimes arrives in a petticoat and love has a mind of its own?

Much to her dismay and surprise, J.B. stepped onto the bed with his damp boots and picked her up, holding her tight against his chest. Without missing a step, he walked off the other side and toward the bedroom door.

Nora clenched her hands into fists and pounded on his shoulders as he carried her into the kitchen.

The big galvanized tub they used for taking baths sat near the stove and she could see steam rising from the water. She had no idea what J.B. intended to do, but whatever it was she would fight him until her last breath.

“Put me down, you brute!” she demanded, shoving against his solid chest.

“Whatever you say, Nora,” J.B. said, dropping her into the tub.

Water splashed over the sides onto the floor and stung Nora’s eyes. She spluttered, pushing hair out of her face then rubbed her eyes.

Before she could stand and step out of the tub, J.B. reached down and ripped off her nightgown, sending buttons flying into the air. Appalled, she watched in horror as he wadded the ruined cloth into a ball and tossed it into a basket with dirty clothing sitting on the floor near the stove.

He glowered at her, pinning her in place with an unrelenting gaze. “You stink and your hair looks like you rubbed bear grease over your head. Take a bath and wash your hair. Maybe by the time you finish, you’ll feel better. At the very least, you’ll smell better than something left to rot on the side of the road.”

Shocked speechless by his actions, she remained as still as stone as he went into the bedroom and returned with the tray of tea and toast he’d prepared.

“When you get out of there, you eat that toast and drink the tea,” he ordered. “If you don’t, I swear I’ll force-feed you.”

Defiantly, Nora lifted her chin. “I’ll eat when I feel like it.”

J.B. picked up a bar of perfumed soap and a wash cloth then bent down until his nose nearly touched hers. “Either you start scrubbing or I’ll do it for you.”

Nora grabbed the soap and cloth from him. If looks could have killed, James Benjamin Nash would have inhaled his very last breath in that moment.