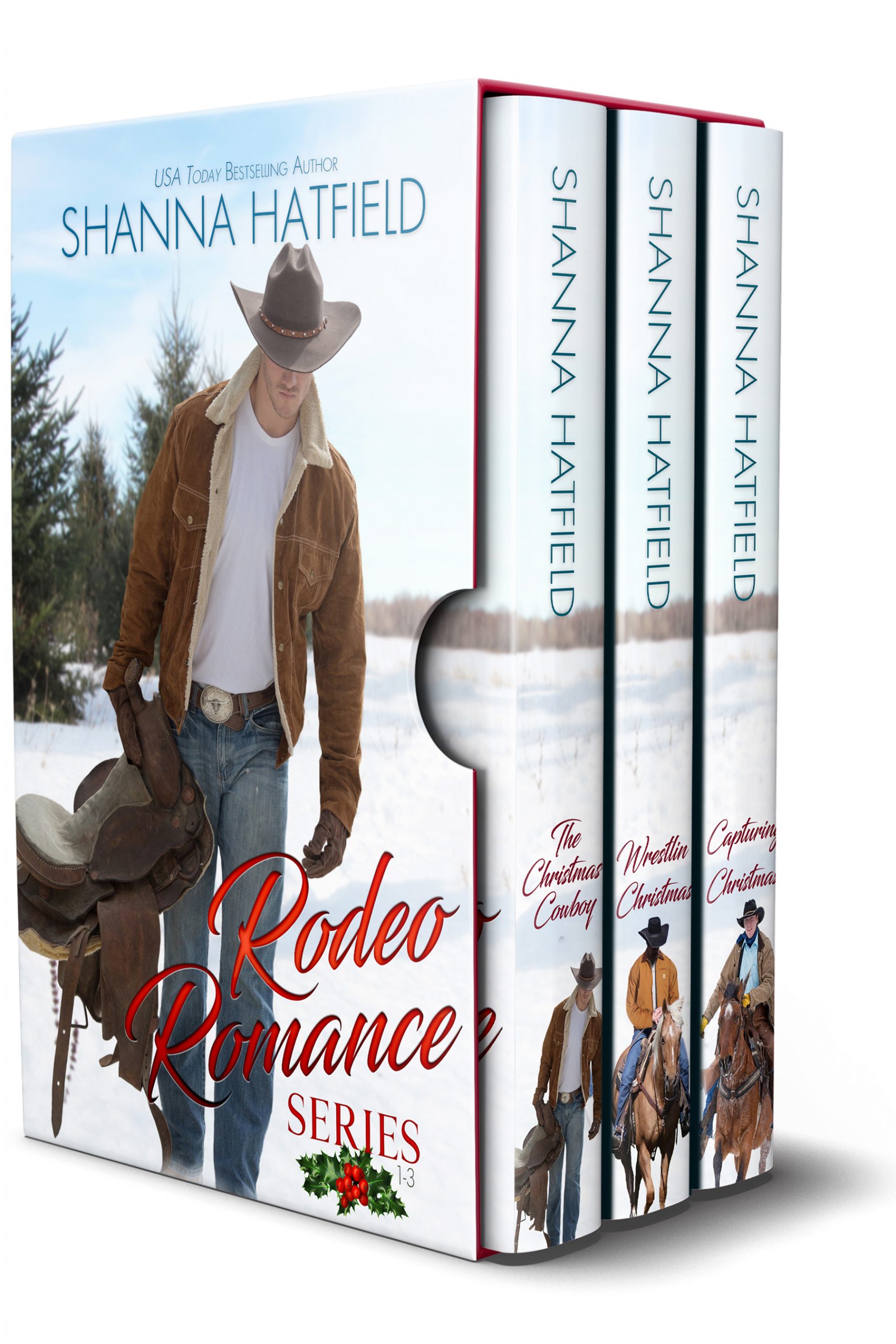 Ready to fall in love with three good-natured,

salt of the earth rodeo cowboys?

This boxed set contains three full-length cowboy romances from the Rodeo Romance series including The Christmas Cowboy, Wrestlin’ Christmas, and Capturing Christmas. Each book is filled to the brim with sweet cowboy romance, faith and family, humor and hope all wrapped up with love and heartwarming Christmas blessings.

The Christmas Cowboy– Tate Morgan is as tough as they come. He can handle the wildest bronc on the rodeo circuit, but he loses the ability to think straight around the beautiful woman he keeps running into at the airport. Completely captivated by the uptight executive who makes it clear she detests cowboys, Tate will have to work a little holiday magic if he wants to win her heart.

Wrestlin’ Christmas – Sidelined with a major injury, steer wrestler Cort McGraw struggles to come to terms with the end of his career. Shanghaied by his sister and best friend, he finds himself on a run-down ranch with a worrisome, albeit gorgeous widow, and her silent, solemn son.

Capturing Christmas – Life is hectic on a good day for rodeo stock contractor Kash Kressley. Between dodging flying hooves and babying cranky bulls, he barely has time to sleep. The last thing he needs is the entanglement of a sweet romance, especially with a woman as full of fire and sass as the redheaded photographer he rescues at a rodeo.

Read all the books in the Rodeo Romance Series!

Don’t miss out on the fun, order your copy today!

Praise for Rodeo Romance I

“Caution:  You may fall in love with a fictional cowboy named Tate! I loved this story so much! The chance meetings at the airport and the flirting back and forth! Family, rodeos, Christmas, trust issues, yeah this book covers it all! The entire book consumed my thoughts until I was finished reading it, and now that I am done, I am still thinking about it!  From contemporary to historical Hatfield can write any genre she wants and I will read it! With characters that are endearing and you feel a realemotional connection with, Hatfield has a way of writing a story that anyone want would want to read! Grab your favorite blanket, find a cozy chair and a cup of hot cocoa because this Christmas story is one you won’t put down until you finish the last word!”

Her focus shifted back to the man staring at her with eyes that looked like a winter sky — soft blue with a bit of ice around the edges.

The fact he made her think of toasty fires and frosty windows left her disconcerted. After all, it was early summer, pleasantly warm, and the sky overhead was a deep shade of blue.

“Despite what you’ve witnessed, Mr. Kressley, I don’t make a habit of looking for trouble. On a normal day, I’d never have done such a dumb thing.”

He quirked an eyebrow, indicating a hesitancy to believe she didn’t step into danger on a frequent basis. “On a normal day, I might have let the horses plow right over you, but I figured you’d had enough excitement for one evening.” Kash touched his fingers to the brim of his hat and turned his horse away from the fence. “Take this as a warning to stay out of the way of my animals.” He glanced back and gave her a half-smirk. “But if your wannabe boyfriend wanders by when I’m moving the bulls tonight, I might not be so inclined to stop.”

Celia gave him an impish smile. “By all means, run them faster. Maybe back and forth a few times while you’re at it.”

Kash guided his horse behind the bucking chutes without another word, but she thought she heard him chuckle.

Her eyes remained glued to the seat of his jeans visible above the back of his saddle as he rode away.

If someone as fine looking as Kash Kressley hung out behind the chutes, she might need to revisit her policy of never setting foot back there.