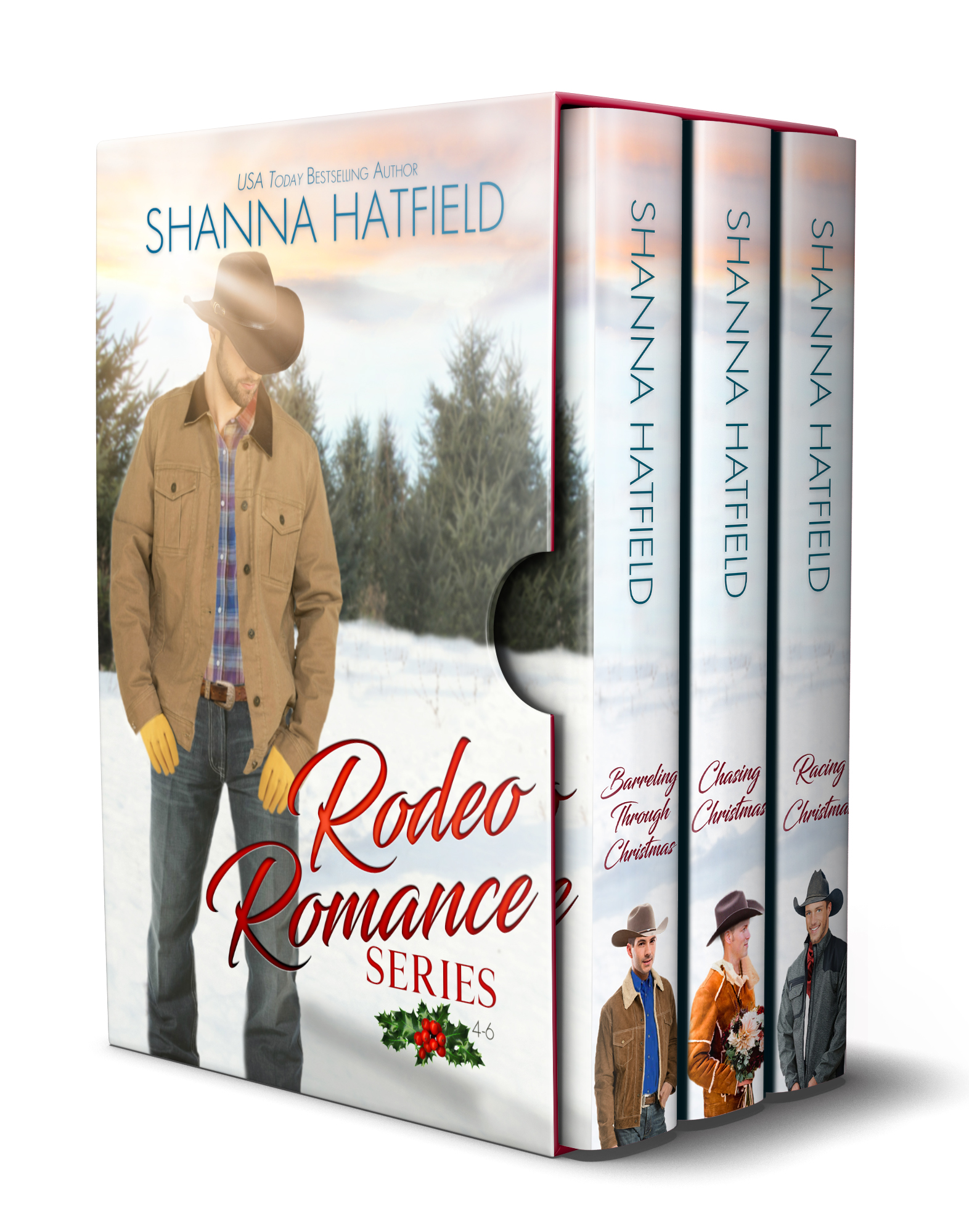 Everything you need for a happy holiday!

This boxed set contains three full-length cowboy romances from the Rodeo Romance Series including Barreling Through Christmas, Chasing Christmas, and Racing Christmas. Each book offers a unique sweet romance, plenty of laughs, heartwarming moments, and characters you can’t forget, along with plenty of holiday hope and Christmas cheer!

★ Barreling Through Christmas – Cooper James might be a lot of things, but beefcake model wasn’t something he intended to add to his resume of rodeo clown and barrelman. When an uptight advertising executive starts flashing a photo of his denim-clad backside all over town as she searches for a new model for a clothing line, he has no intention of telling her the cowboy she’s desperate to find is him.

★ Chasing Christmas – The promise of an all-expenses paid vacation to Las Vegas lures Jessie Pierce on an adventure that ends with her unexpectedly married to a hunky bull rider. Chase Jarrett has no more interest in being married than she does, but they find themselves stuck in a year-long agreement. Will love blossom on the Double J Ranch?

★ Racing Christmas – Brylee Barton has just one goal in mind: win the barrel racing world championship. Not for the glory, but for the attached cash prize that could save her family’s ranch. When an injury leaves her at the mercy of the very same copper-headed, silver-tongued cowboy she once vowed to loathe forever, she has no choice but to swallow her pride and accept his help.

“From the realistic rodeo scenes to the tender love scenes, Shanna Hatfield keeps you reading.”

Brylee opened her eyes and tipped her head back, watching as the pickup men rode into the arena. One went to catch Rocket while the other hastened her direction. The announcer and the barrelman told a joke as the medical team hustled toward her as fast as they could make it through the mud.

Frustration battled with anger as the pickup man approached. The last person on earth she wanted to see was that particular member of the male species.

“Maybe today would be a good day to die,” she muttered as she tried again to disentangle her foot from the fence. If she freed it before he reached her, she could crawl over the fence and make her way back to her trailer without speaking to him.

Why couldn’t he have gone on ignoring her like he had the last five and half years? Why tonight, of all nights, was he going to force her to acknowledge him? Didn’t she have enough to deal with, like missing her opportunity to claim the winning title? Or the undeniable fact she looked like a half-drowned kitten that had been dragged through a pig wallow?

She thought of her wasted entry fee. Not to mention the hours it would take to get all the mud scrubbed off Rocket and her tack.

Wasn’t a no-score enough punishment without being forced to face the most arrogant, self-centered, childish man she’d ever known?

Trapped on her back in the mud, it seeped through her clothes, chilling her and making her fight the need to shiver. She questioned how she could exit the arena with even a shred of dignity when her pants oozed soupy muck like a toddler’s soggy diaper.

The slap of boots hitting the mud in the arena drew her gaze upward. A handsome face appeared above her as the pickup man leaned over her. Gray-blue eyes twinkled behind thick lashes and a smile full of even, white teeth gleamed in the arena lights. Shaun Price braced his gloved hands on his thighs and offered her an infuriatingly cocky grin.

Why couldn’t she have at least passed out and awakened far away from the infuriating, irritating, Adonis-like cowboy?

“Well, Bitsy, I see you’re still racing Christmas,” he said, his voice sounding as deep and rich as she remembered.

Brylee glowered at him. “You know I hate that name.”

“Yep, I sure do.” Shaun chuckled and stepped back as the medics surrounded her…