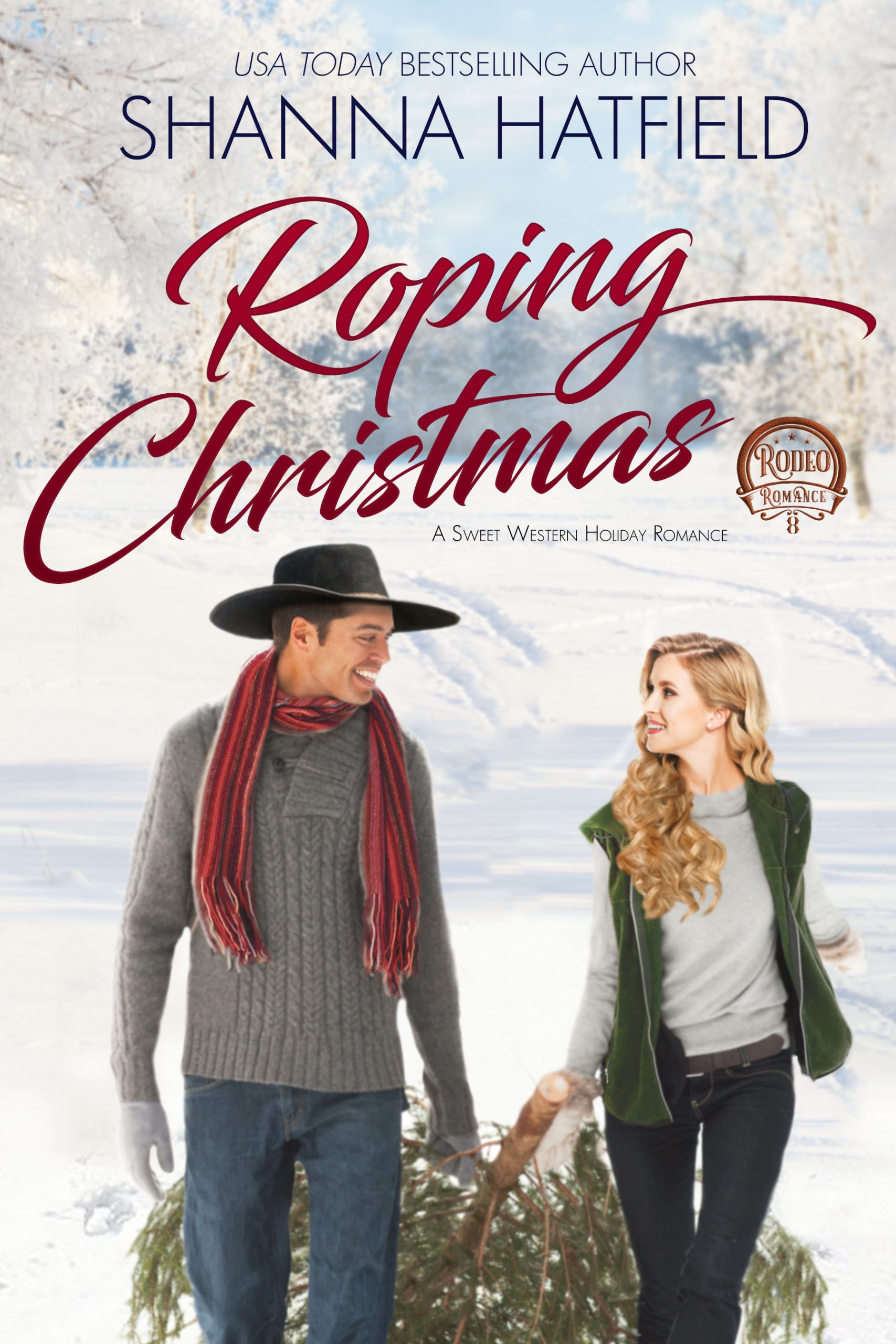 A focused cowboy, a distracted executive, and a hilarious quest make for an unforgettable holiday . . .

Wyatt Nash is a professional tie-down roper, a good ranch hand, and not too shabby when it comes to attracting women. But according to his five-year-old niece, he needs to work on both his roping skills and his dating game. His sister thinks he needs to settle down. And don’t get him started on the advice he gets from well-meaning friends. When his rodeo sponsor, billionaire Jon Sinclair, asks for his assistance in tutoring a clueless city girl about Sinclair Industries, Wyatt doesn’t feel like he can say no. Then he discovers he’ll be teaching none other than the one woman on the planet who wants nothing to do with him.

Ashley Jarrett would do almost anything to turn her small publicity firm into a huge success. When Jon Sinclair expresses interest in working with her, she readily agrees to his crazy idea to have her learn about his company through hands-on projects. Not only is she forced far outside her comfort zone, but the man documenting every bumbling misstep she takes is an infuriating cowboy she’s determined to ignore.

Packed with small-town charm and the wonder of falling in love, Roping Christmas is a sweet holiday romance sure to bring laughter and infuse hearts Christmas cheer.

“I felt like I was reading a Hallmark movie!”

“No author brings total opposites together better, from initial magnetic attraction to the inevitable conclusion, than Shanna Hatfield.”

“This is such a fun story that will have you laughing and smiling all the way through. Such a brilliant plot that just gets better as the story progresses.”

Chase parked the SUV and got out. While he helped Jessie retrieve the pies from the back, Ashley watched a lovable mutt rolling in the grass. A cowboy rounded the corner of the house, failed to see the dog, and tripped. Arms flailing, he executed a few fast moves with his feet and caught himself on a porch post. Appearing embarrassed, he looked around to see if anyone had witnessed his less than graceful appearance.

Ashley slid out of the SUV, unable to contain her mirth. As the cowboy walked over to her, she smirked, amused by his obvious discomfort at being caught.

She held out her hand to him in greeting, completely unprepared for the zap of something electric that traveled up her arm and threatened to explode in her head.

“You must be Chase’s cousin I’ve heard so much about,” the man said in a smooth, deep voice that made her knees feel slightly weak.

“I’m Ashley. And you must be Wyatt Nash. I’m surprised we haven’t met at a rodeo.”

Wyatt shrugged, but maintained his hold on her hand. From the look of interest in his eyes, Ashley wondered if he experienced the same ridiculous, inexplicable sensations currently making her wonder if she was having a sun stroke or something more tragic, like falling in love.

That was impossible, though. Chase might have taken one look at Jessie and fallen head over heels in love, but that wasn’t the way things normally worked. Not at all.

Besides, Ashley wasn’t interested in settling down and becoming domestic. She had career aspirations. Until she achieved her goals, she had no time for distractions like incredibly hunky cowboys who gave tall, dark, and handsome all new meaning.

“I’ve meant to introduce you, but you never seem to be at the same rodeos,” Chase said, grinning at the two of them. “Thanks for inviting us over tonight, Wyatt.”

“Our pleasure.” Wyatt turned loose of Ashley’s hand and moved to give Jessie a one-armed hug. When he did, Ashley felt a prick of jealousy that was both unfounded and unsettling.

“We come bearing pies,” Chase said, tipping his head toward the pie he held in his left hand.

“Sarah said you were bringing dessert. I know whatever Jessie made will be fantastic.” Wyatt smiled and motioned for them to precede him down the walk.

“What makes you think I didn’t make these pies?” Chase asked as they crossed the walk and went up the porch steps.

Wyatt snorted and shook his head at Chase. “From what I recall, you can grill steak, and that’s about it.”

“That would be correct,” Jessie said, smiling sweetly at her husband. then glancing at Ashley with a conspiratorial wink. “I think that’s one more thing than Ashley can make.”

“Hey, now! We aren’t here to discuss my culinary talents, or lack thereof.”

“You can’t cook?” Wyatt asked as he held the screen door for them to enter the house.

“Not a bit, unless salads count. I make a mean cobb salad,” Ashley said as she stepped into the large entry inside the cool interior of the house.

Hardwood floors gleamed, and sunlight shone through sparkling windows. A feeling of decades of history mingled with an overall sense of happiness and enveloped her in greeting.

“What a lovely home,” she said, looking around.

“It’s been in our family a long, long time. Rooms have been added, upgrades made, but the bones of the house were built back in the late 1870s.” Wyatt spoke with a hint of pride as he led them down a hallway to a sunny kitchen.

“Hi! We’re so happy you could join us,” said a blond-haired, blue-eyed, very pregnant woman who looked nothing like Wyatt. She offered them a friendly smile as she wiped her hands on a dishtowel and tossed it on the counter near the sink.

“Thank you for having us over, Sarah,” Jessie said, setting the pie she carried on the counter, then giving the woman a hug. She pulled back and motioned to Ashley. “This is Ashley Jarrett, Chase’s cousin. Ashley, Sarah is Wyatt’s sister. She and her husband, Tyler, run Nash’s Folly.”

“With help from Wyatt, of course,” Sarah said, reaching out to shake Ashley’s hand. “It’s wonderful to meet you. I’m so glad you could join us. Welcome to our home.”

Ashley smiled at the woman who was beautiful even with her hair pulled back in a messy ponytail and no trace of makeup on her face. “I’m so pleased to meet you and hope I’m not an imposition. I didn’t even think about Chase and Jessie having plans this evening when I dropped in on them unexpectedly.”

Chase settled his arm around her shoulders and pulled her against his side in a brotherly hug. “You know we love to have you anytime you can visit.”

“I do know that and am grateful for the standing welcome.” Ashley smiled up at her cousin while a tiny tornado swept into the kitchen.

Corkscrew curls the color of straw bounced in every direction as the little girl launched herself at Wyatt. He swung her into his arms and kissed her rosy cheek. The little one looked like a miniature replica of Sarah.

“Hi!” the child greeted with a broad smile that showed off a missing space in her front teeth.

“Hi, Livy.” Jessie smiled at the little girl. “Are you keeping your Uncle Wyatt busy while he’s here?”

“Yep! We watched a movie last night about the bear ’cessities. It was awesome! But Uncle Wyatt said he’s missing some of the ’cessities. I told him he needs a wife and babies.” Livy wiggled against Wyatt, so he set her on her feet.

She rushed over to Ashley and took her hand in hers. “Hi! I’m Livy. Wyatt’s my uncle, and that’s my mama, Sarah. My daddy is washing up, then we can eat. I’m starving to death! You’re pretty and smell nice, too.”

The little imp turned toward Wyatt. “Did you smell her, Uncle Wyatt? She smells good. Maybe she’d be your wife, and you could have babies, Uncle Wyatt.”