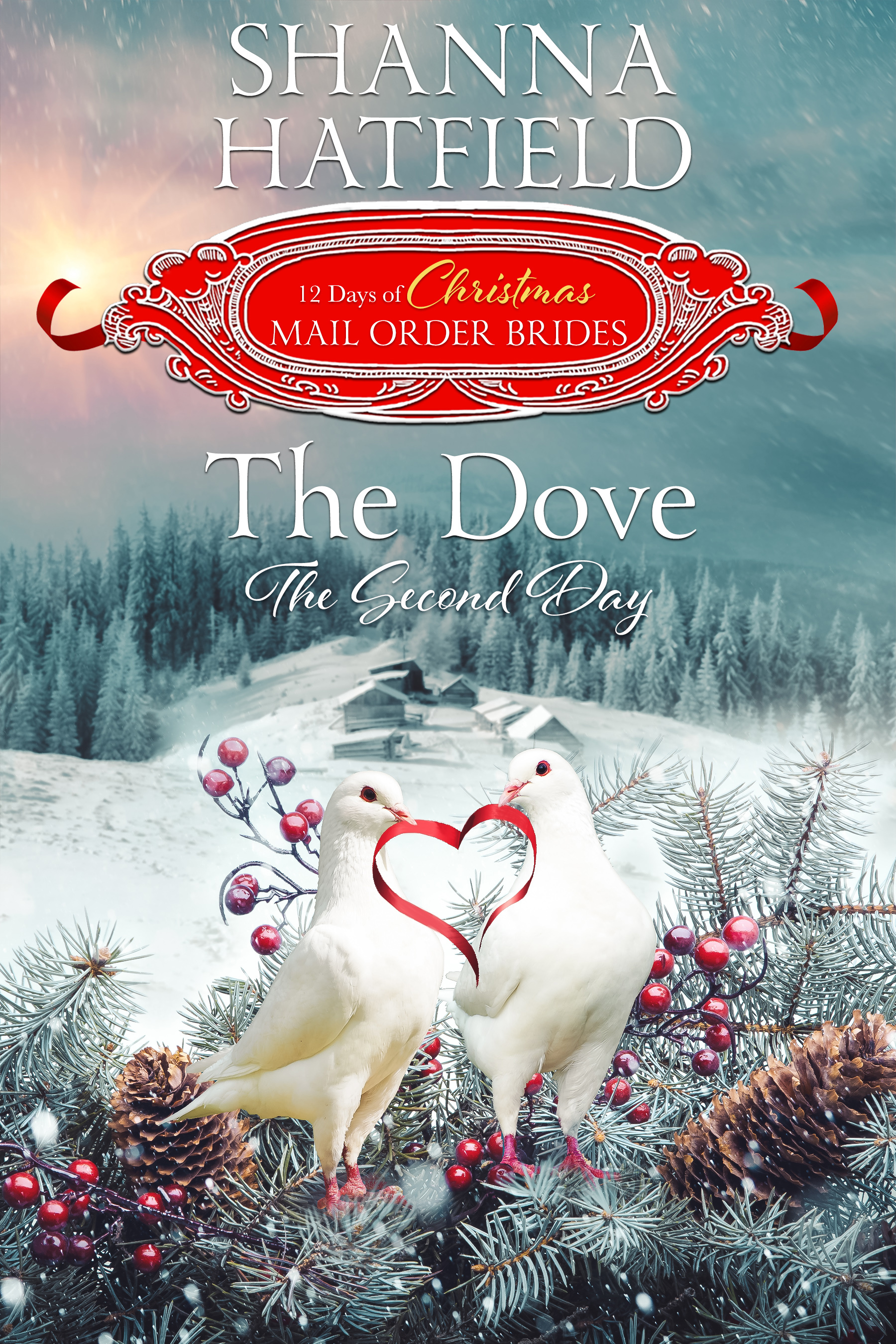 Bewitched, beguiled, and in over his head…

Culver Daniels spent years cultivating a peaceful, orderly existence with his blacksmith shop and livery business. Then the pastor of Noelle lands upon a crazy scheme to save the town by sending for a bunch of mail-order brides. Despite his determination to remain single, Culver finds himself among those agreeing to wed. The moment he meets the beautiful gypsy woman he’s promised to marry, he realizes life will never be the same.

Widow Kezia Mirga has no desire to marry again. Yet, for the sake of her most cherished treasure, she decides to wed a man in a remote Colorado mining town. She arrives to find nothing as she expected, the town in a state of turmoil, and her intended far more handsome and charming than she imagined. Dare she dream of a future with the burly blacksmith, or should she escape back to Denver before she loses her heart?

Will true love triumph over secrets and surprises in this sweet holiday romance?

Praise for The Dove

His gaze traveled from Mrs. Boonesbury to the woman behind her. “And your name, Miss?”

A slight blush dusted the woman’s cheeks with pink as she lifted chocolate-colored eyes to his.  Culver had always been quite partial to chocolate. He could quickly grow accustomed to staring into eyes that held such mesmerizing flecks of amber light among their glossy depths.

When she didn’t respond, he took a step closer, but Mrs. Boonesbury subtly shifted to block him from the stunning woman.

Culver moved to the right and so did the gypsy’s self-appointed guard. He shifted to the left, as did Mrs. Boonesbury. A few more steps back and forth and Culver decided the old woman was not only a fair dancer, but also the most irritating person he’d encountered in a long while.  He couldn’t fathom a single reason why she’d prevent him from getting any closer to the gypsy woman, but she undoubtedly planned to do so.

Defeated, at least temporarily, Culver looked again to the dark-haired woman. “Miss? What’s your name? Who are you to marry?”

The Dove is book 2 in the 12 Days of Christmas Mail-Order Brides series.

Twelve men. Twelve brides. Twelve days to save a town.

Christmas, 1876: Noelle, Colorado is in danger of becoming a ghost town if the railroad decides to bypass the mountaintop mining community. Determined to prove their town is thriving, twelve men commit to ordering brides before the railroad’s deadline six days into the New Year.

Each of the twelve women has her own reason for signing up to become a mail-order bride. But after they arrive in the uncivilized settlement, they aren’t so sure they’ve made the right decision. Neither are the grooms.

Will the marriages happen in time to save Noelle? The countdown starts on Christmas Day.

The Twelve Days of Christmas Mail-Order Brides, written by twelve bestselling authors, put a new twist on an old song in this heartwarming historical romance series with stories ranging from sweet to sensual.

The Partridge by Kit Morgan – A clever man’s plan becomes a matchmaking disaster…and the countdown begins to save the town of Noelle. Releasing December 1.

The Dove by Shanna Hatfield – A bewitching gypsy and a beguiled blacksmith tangle over a hidden treasure…with only eleven days left to save the town. Releasing December 2.

The Hens by Merry Farmer – A wandering woman finds exactly who she was looking for, but not who she was expecting… with only ten days left to save the town. Releasing December 3.

The Calling Birds by Jacqui Nelson – A wanted woman’s flight, a man in pursuit of honesty not stolen gold… and only nine days left to save the town. Releasing December 4.

The Gold Ring by Caroline Lee – A dangerous masquerade and a twist of fate put Noelle’s future at risk…with only eight days left to save the town. Releasing December 5.

The Goose by Peggy L. Henderson – A woman on the run, a man who doesn’t want to be caught—it’s one wild goose chase…with only seven days left to save the town. Releasing December 6.

The Swan by Piper Huguley – A beautiful woman with secrets comes to Noelle to confront a powerful person with the truth…and only six days left to save the town. Releasing December 7.

The Maid by Rachel Wesson – A convicted murderer, a young maid on the run…and five days left to save the town. Releasing December 8.

The Dancing Lady by Mimi Milan
– A desirous diner owner and a disguised dancer waltz their way to love… with only four days left to save the town. Releasing December 9.

The Lord by Danica Favorite – An assayer and a ladies maid, each living a lie. Will the truth ruin everything…with only three days left to save the town. Releasing December 10.

The Piper by Amanda McIntyre
– A determined matchmaker, a stubborn mountain man…and only two days left to save the town! Releasing December 11.

The Drum by E.E. Burke – A bad luck bride, an exploding disaster…can Noelle be saved in just one day? Releasing December 12.

“You, Mr. Daniels,” she said in a soft, alluring voice that melted Culver’s insides and turned his brain to mush. “I’m Kezia Mirga, but my friends call me Zee.”

“You’re even more beautiful than I dreamed, Miss Mirga,” Culver said, shocked to discover his tongue joined the rebellion his heart and feet previously staged against his good sense.