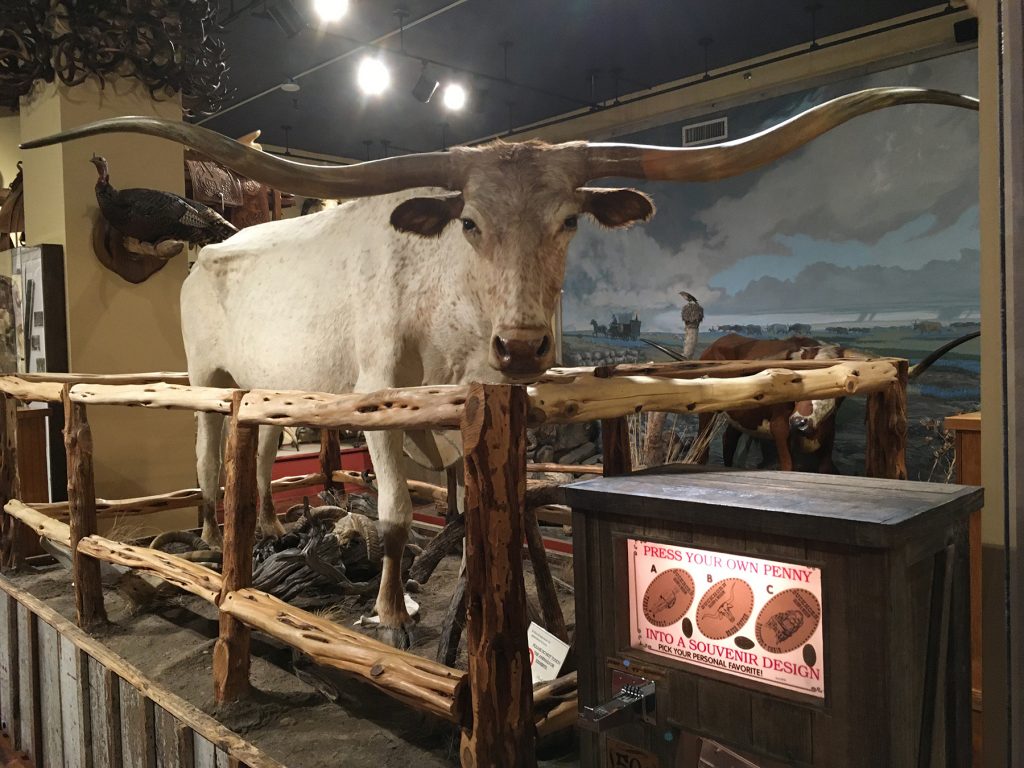 When Captain Cavedweller and I were in San Antonio, we tried to visit as many museums as possible. We both enjoy them and you learn so much about the history of a place going to them.

One morning we decided to go for a stroll and happened across the Buckhorn Saloon and Museum. It’s located near The Alamo and the Riverwalk. In fact, it’s been in business for more than 130 years and is among the oldest saloon’s in Texas.

Today, it houses a cafe, gift shop, shooting gallery, and two museums – the Buckhorn Musem and the Texas Ranger Museum.

CC and I thought we’d spend an hour there and see what there was to see. Two and a half-hours later, hunger drove us to wrap things up, but it was such a great museum.

Back in 1881, Albert Friedrich, a 17-year-old bartender and bellhop at San Antonio’s Southern Hotel on Main Plaza, decided to open his own saloon across the street. Shortly after opening, Albert learned that many people didn’t have a lot of money in their pockets to spend on drinks. He landed on the idea to accept horns and antlers in exchange for a free beer or shot of whiskey. From that point on, the Buckhorn collection grew to become one of the most unique collections of horns and antlers in the world.  Albert and his father fashioned furniture from the antlers and horns. Above is a small sampling of those on display. There was even a chair they constructed for President Theodore Roosevelt. When Teddy was recruiting his Rough Riders, the Buckhorn Saloon was one of the places he visited to find the men who would later join his group. 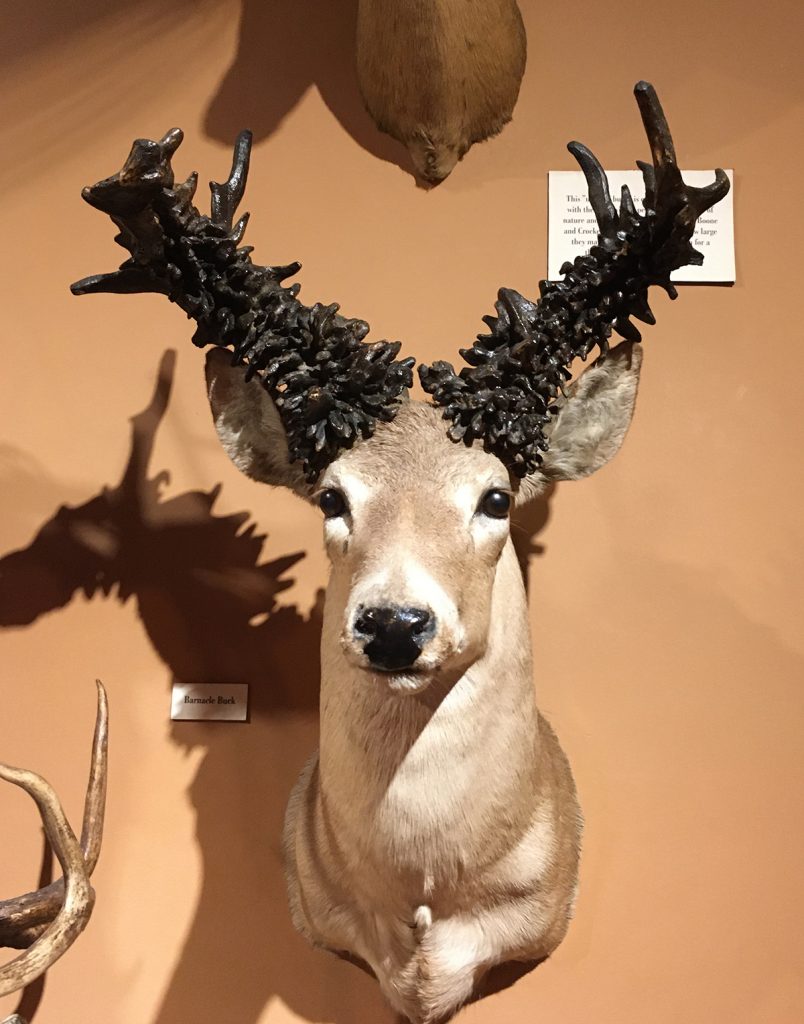 One of the things CC greatly enjoyed was the incredibly variety of wildlife exhibits from all over the world. There were fish from the seven sees, animals from every continent, not to mention strange oddities. The exhibits included more than 520 species of wildlife, many of which are record holders.  The Buckhorn’s claims their most prized record holder as the famous ‘78 Point Buck’.  This rack was sold to Albert for a mere $100 dollars back in 1890.  Other specimens include a record 1,056 pound black marlin and a 10,000 year old pre-historic Irish elk.

In 1922, as Prohibition swept through the United States, the Buckhorn moved to the corner of Houston and South Flores Streets. Many saloons were forced to close their doors, but Albert used his collection and creativity to keep the Buckhorn open. He sold non-alcoholic beverages, lunches, and had a curio store. 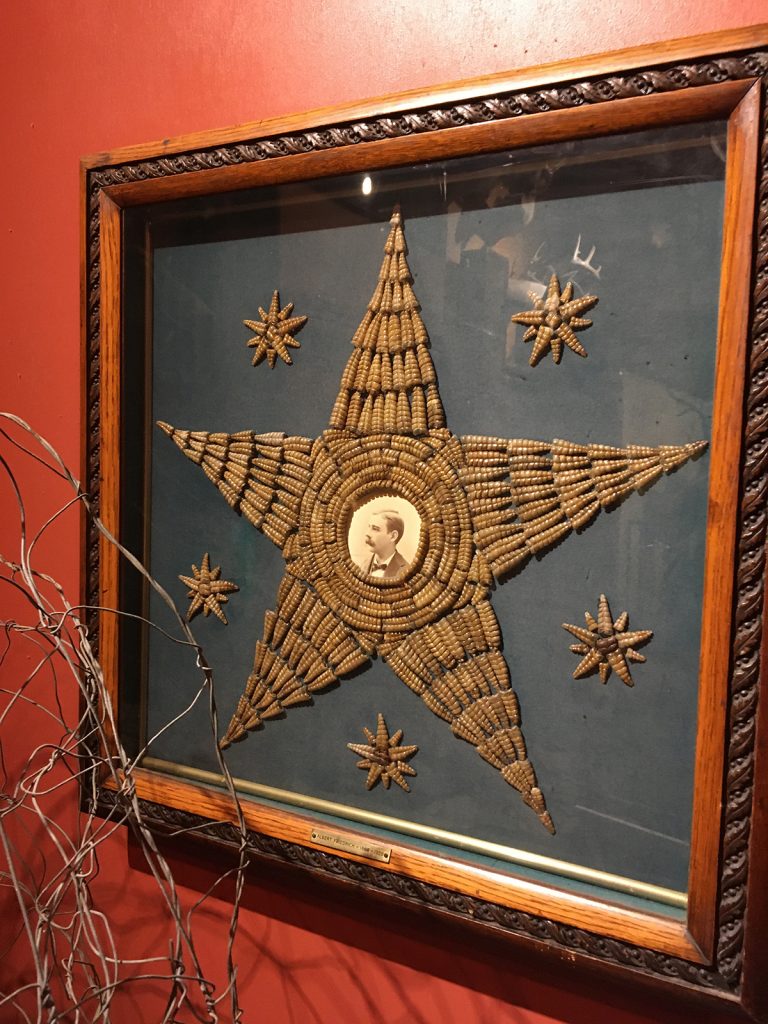 The collection and property were eventually sold, but in 1996, Albert’s granddaughter and her husband, Mary and Wallace Rogers, purchased the entire collection and moved it to the corner of Houston and Presa Streets where it stands today. 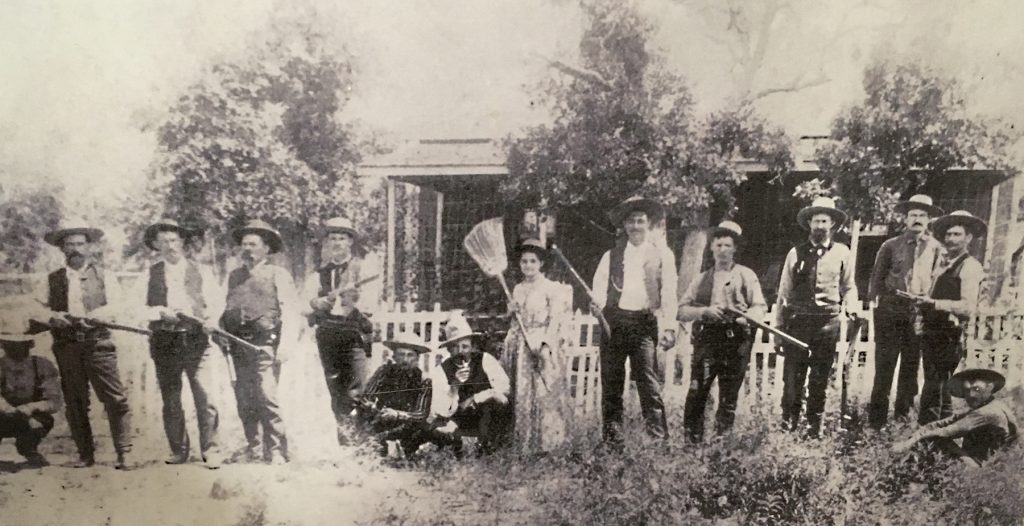 In 2006, the Texas Ranger Museum was added. It includes hundreds of fascinating and authentic Texas Ranger artifacts. A highlight is the recreation of San Antonio with Ranger Town that includes a replica Buckhorn Saloon, a jail cell, blacksmith, and a replica of Bonnie and Clyde’s getaway car. I loved this photograph that showed the Texas Rangers (and the woman posing with the broom) had a great sense of humor.

If you find yourself in San Antonio, clear a few hours from your schedule to visit this entertaining and unique museum!