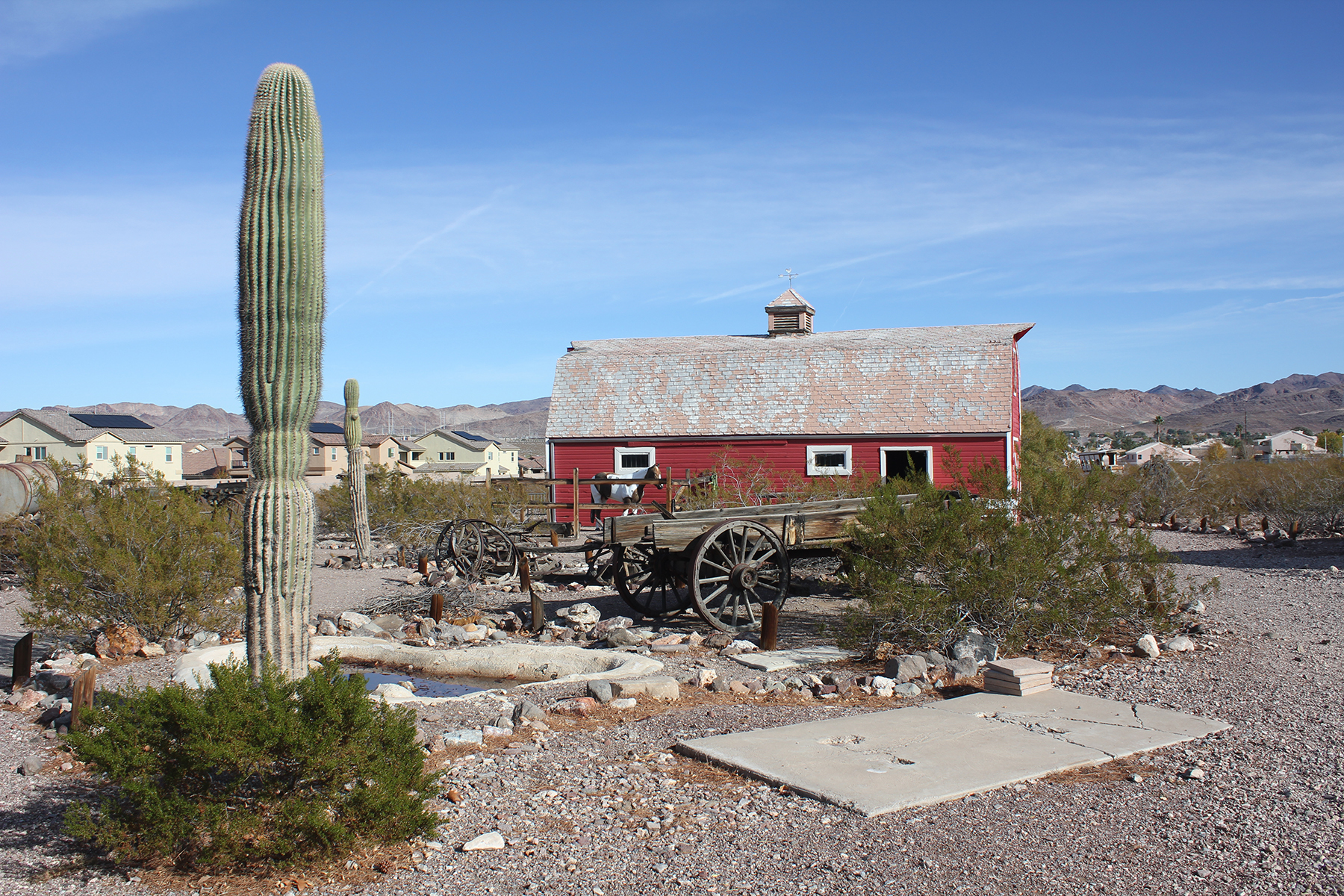 When Captain Cavedweller and I were in Las Vegas last month, we decided to do a little exploring in places we hadn’t yet visited.

One sunny morning, we drove to Henderson, Nevada, to visit the Clark County Museum.

Southern Nevada’s history comes to life at the museum with more than thirty acres of exhibits, historic structures, walking trails, and nature areas.

Start in the pueblo-style Exhibit Center where you pay for admission, get a map, and visit with those working in the gift shop for insider tips on what’s on the must-see list. 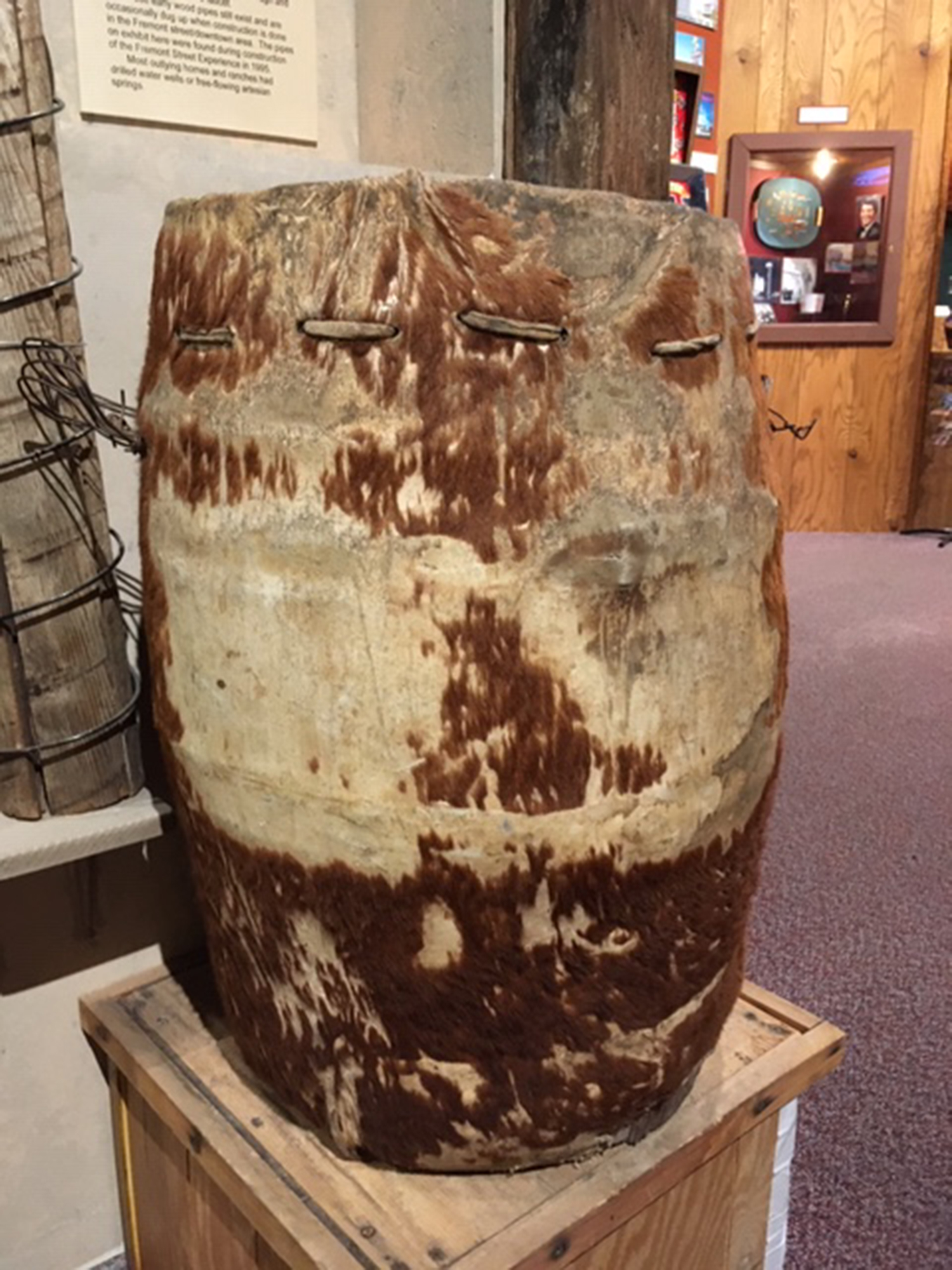 There are any number of fascinating exhibits inside the Exhibit Center. One of my favorites was this hide-covered water barrel.

Back before you could order goodies online and have a box arrive at your door with everything from dinner to a mattress, most items were shipped in crates, casks, or barrels.  Some of the items that would have been shipped in a barrel included flour, molasses, corn, cider, gunpowder, and nails.

Although what originally was shipped in this barrel is unknown, in the 1890s it was repurposed as a water barrel because it lost it’s tightness. Cowhide stretched and sewn around the barrel absorbed water that seeped through the staves. When it dried, it shrank, creating a water-tight container. Wire lug handles were added to make carrying the barrel easier. The barrel wrapped with hide weighs 30 pounds and holds 20 gallons of water (which weighs approximately 160 pounds). Imagine packing that around! 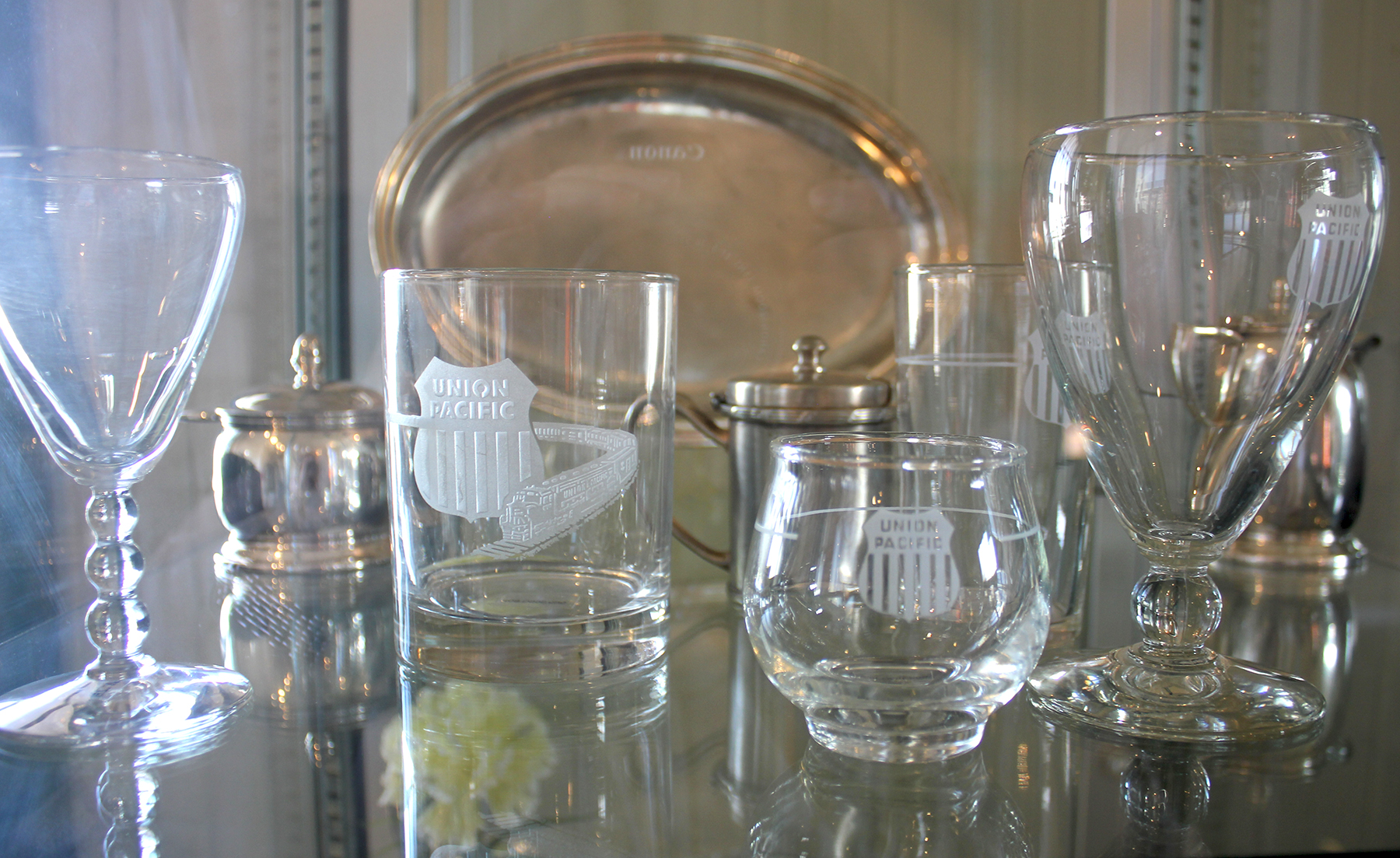 There are many, many areas to explore at the museum, like a great depot building (built in 1931 and moved from Boulder City) that housed this beautiful drink ware from Union Pacific. You could even climb inside a caboose and see what life was like on the railroad.

Visitors will find a ghost town and mining trail, rich with artifacts, as well as a desert Paiute camp that offers a perspective of life in the hot and arid southwest environment found in Clark County.

My favorite part of the museum, though, was Heritage Street. A collection of of historic homes placed on what appears to be a residential street complete with landscaping offer glimpses into the past and detailed visuals of how residents in the homes might have lived. 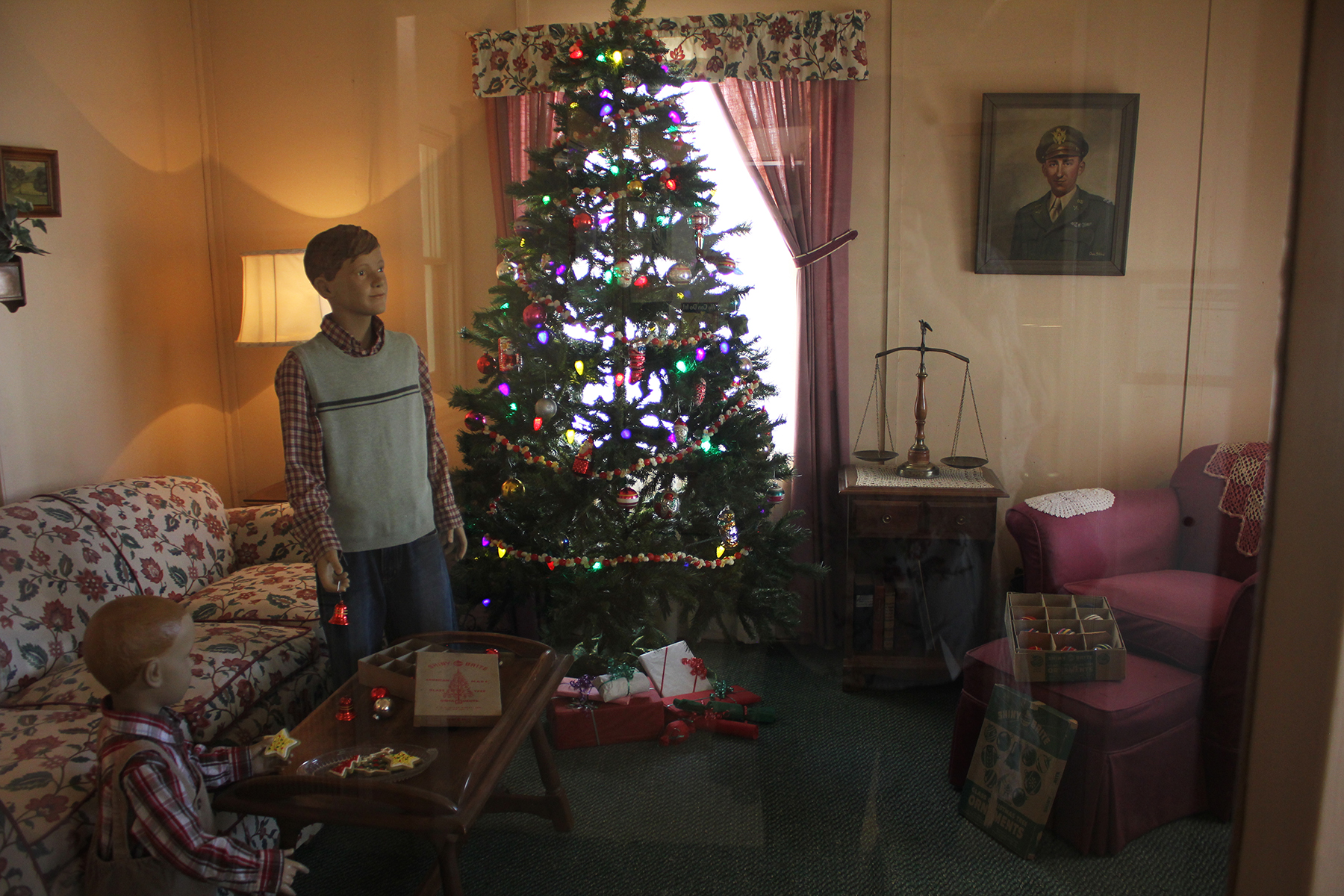 We started the Heritage Street tour in the Townsite House. The house was constructed in 1942 as part of a project to provide housing for workers of a magnesium processing plant that opened in 1941. To meet the houses needs of the employees, 297 three-bedroom houses and 703 two-bedroom houses were constructed, including this one. The houses were considered temporary housing at the time they were built with walls made of plywood with batten strips covering the seams and the outside of redwood siding. This house was moved to the museum in 1982 and opened in 1985. Since it was December when we visited, the house was decorated for the holidays and Bing Crosby crooned “White Christmas” as he stepped inside.

The kitchen in the house made me think of both of my grandmothers. The dishes in the sink happened to be a pattern Grandma collected. And Granny had many similar items to those on the shelves including the tins. It was really fun to see all these details that brought the idea of what it would have been like as a home in the 1940s to life. 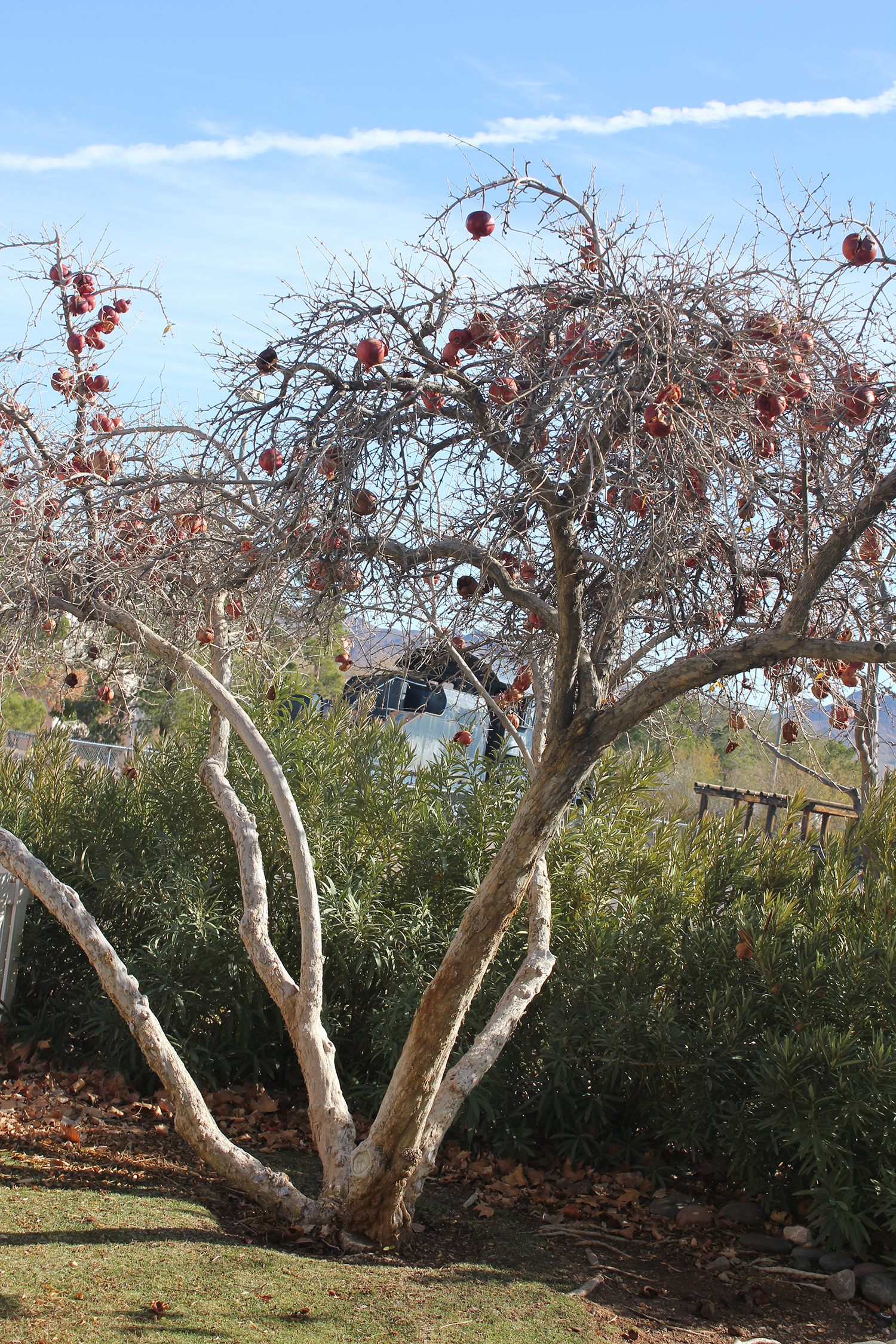 One of the yards on Heritage Street had a pomegranate tree. I’d never seen one before and thought it was pretty cool! 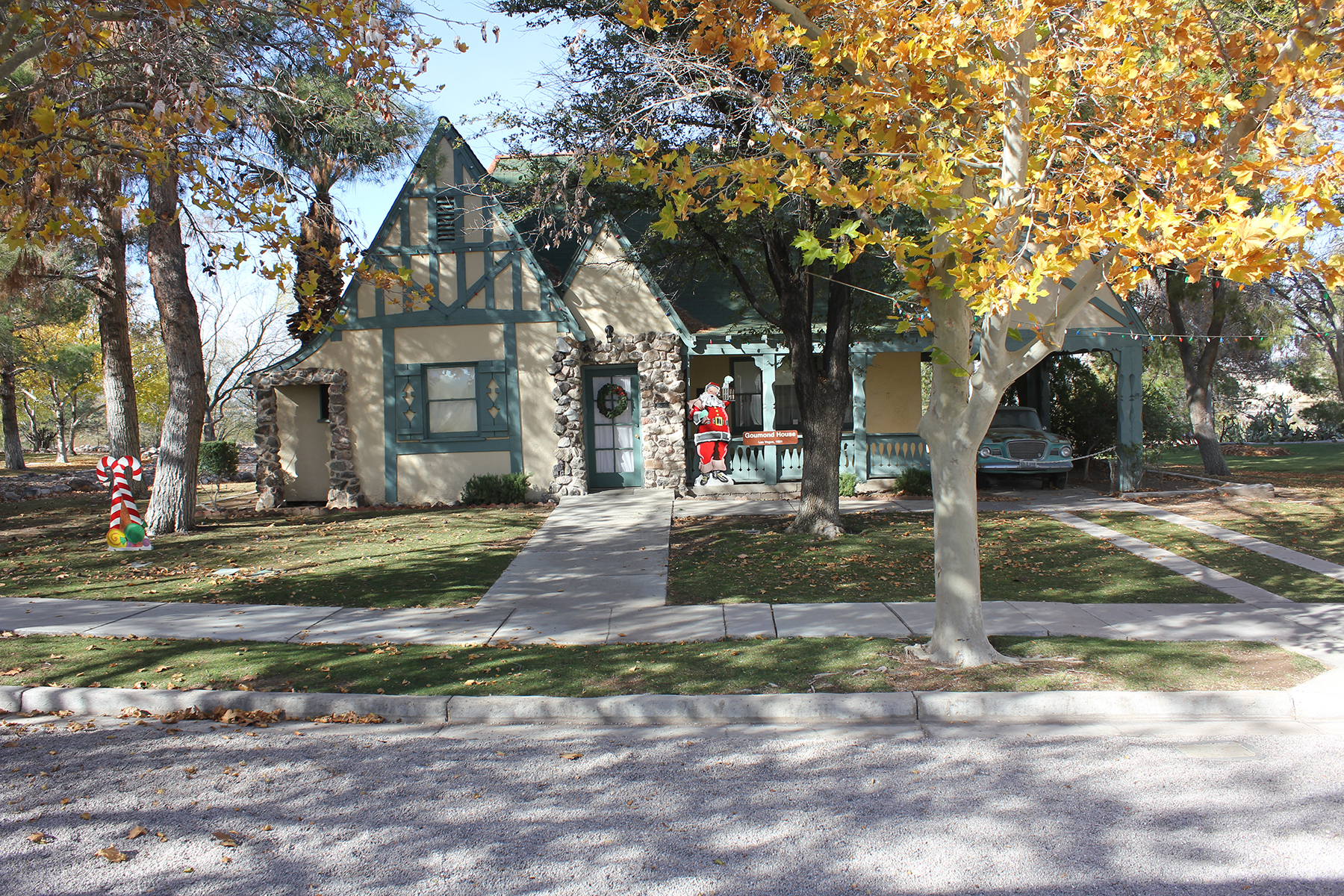 As exteriors of houses go, this one was my favorite. The Goumand House was built in 1931 (and restored to the 1950s era). Prosper Goumand, his wife, Gertrude, and granddaughter, Margo, lived in this Tudor Revival home. They employed a maid and a cook. The house (before it was moved to the museum) had a full basement. It also boasted one of the first private swimming pools in Las Vegas. The couple was known to host frequent and fashionable parties. 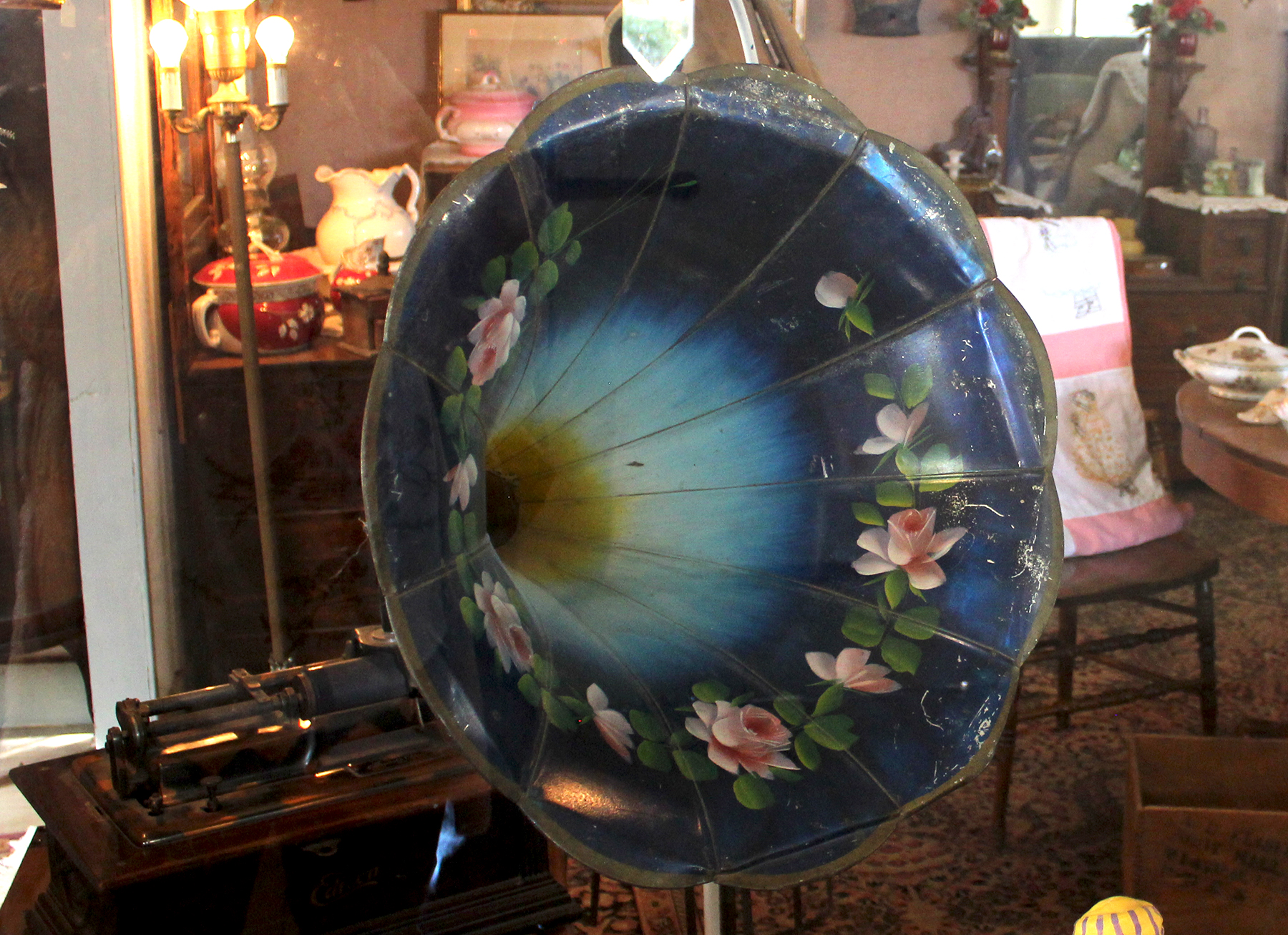 The Giles/Barcus House was built in 1924 as a one-room typical boomtown home, although it included a bathroom. Edwin Giles, a mining engineer, purchased the house in 1928. In 1955, the house was moved into Las Vegas and became The Odd Shop, an antique store. The museum displays include an assortment of antiques and oddities that may have been found in the store in the 1960s. I absolutely adored this phonograph. I’ve never seen one painted in such lovely colors. 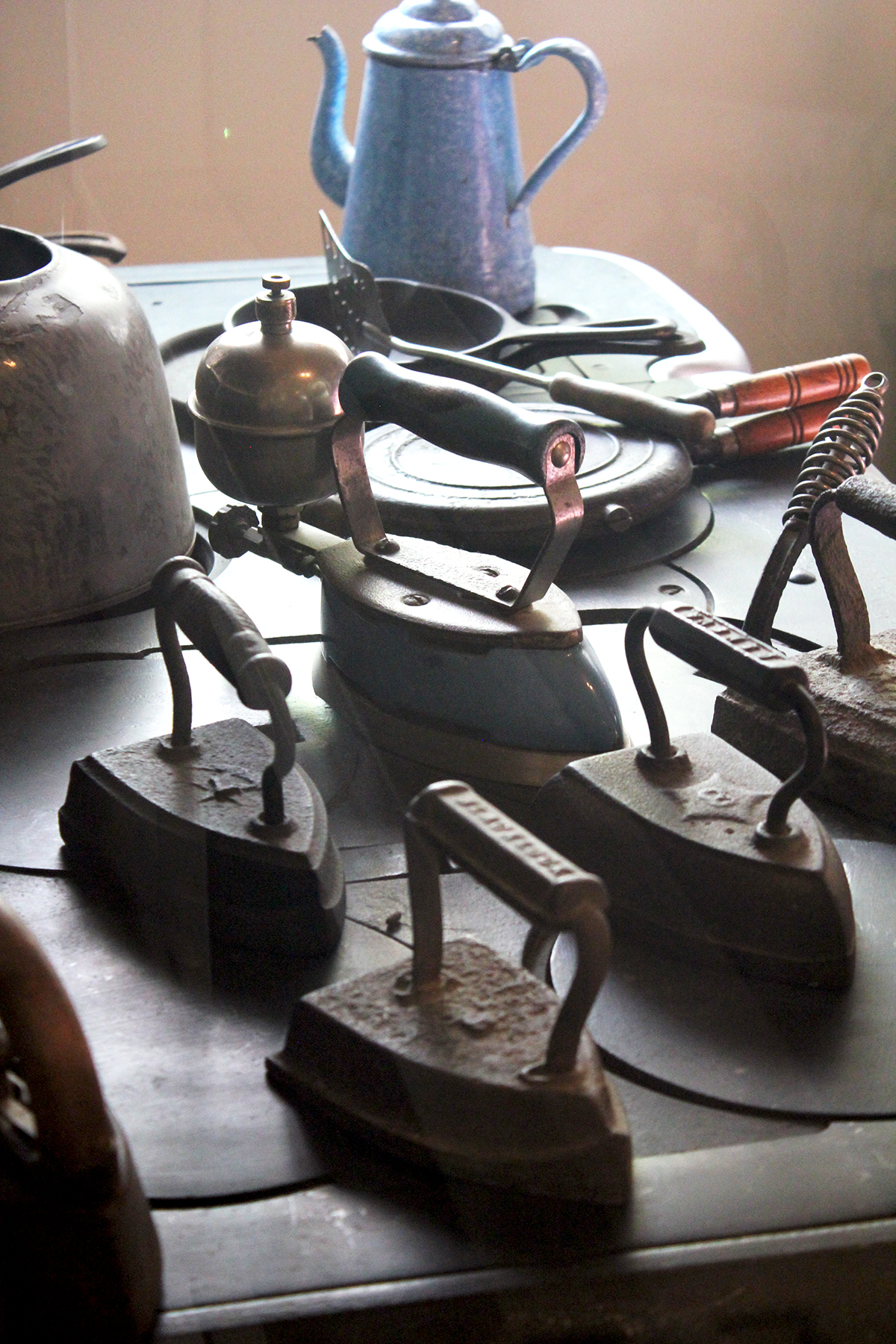 There was also a display of irons on the stove in the kitchen that caught my eye, mostly because of the one that has a little container on the back of it. From what I could find, it was manufactured by Coleman in the 1930s. It was a self-heating, gas powered sad iron with ‘cool blue’ enamel finish and a wooden handle. Typically these ‘gas’ irons ran on kerosene. 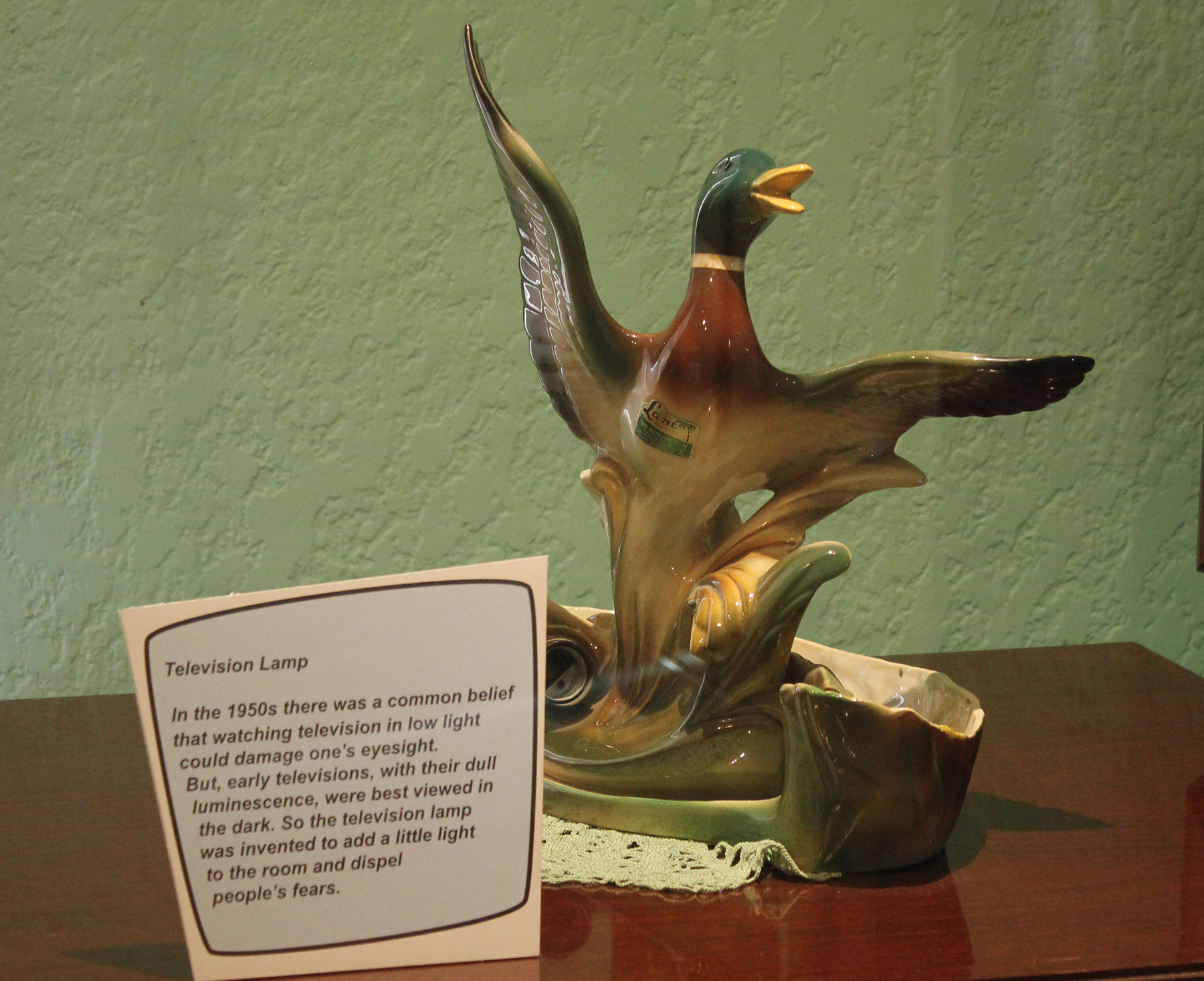 One of the houses had a big display of televisions from various eras along with television lamps. I had no idea these laps existed, although, now that I think about it, I’m pretty sure my grandparents had one. The common belief in the 1950s was that watching television in low light might damage your eyesight. Early TVs, with a dull luminescence, were best viewed in the dark. Television lamps were invited to add a little light to the room and dispel fears of permanent vision damage. I asked my dad if he remembered television lamps and he said, “yeah, I think  the folks had one on their TV.”

If you’ve bemoaned the fact your refrigerator isn’t as high tech as the neighbor’s down the street, be glad with what you have.

This refrigerator, also known as a desert cooler, was a screened box with a metal pan at the top and bottom, and wrapped in burlap. Water was poured into the pan on top and the burlap served as a wick, pulling the moister around the box. With a wind blowing through it, and (hopefully) kept the contents cool. 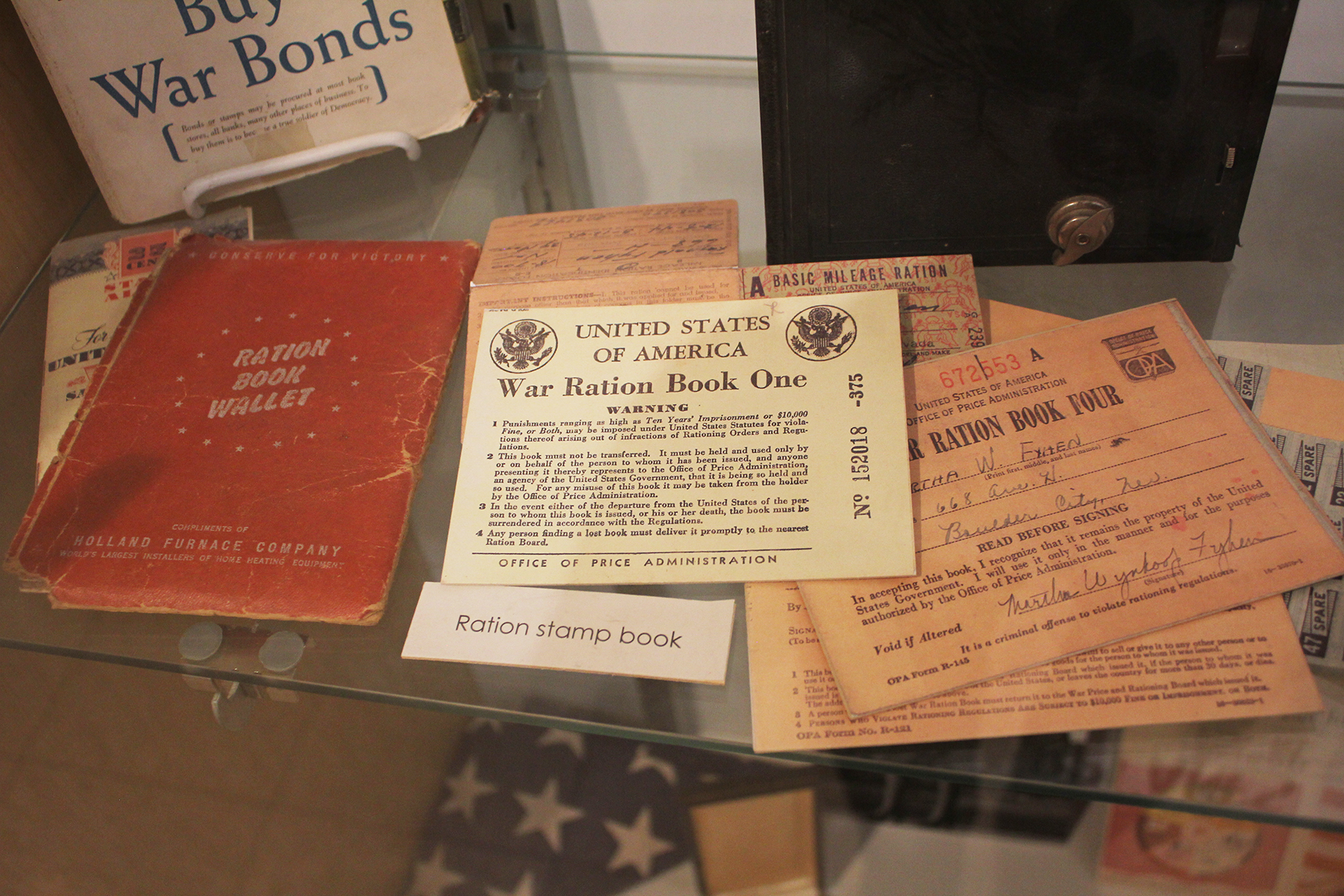 Since I love WWII history, it was awesome to see this display of ration books.

If you ever find yourself in Las Vegas with several hours to kill, I highly recommend making the short drive to Henderson and checking out an amazing museum.