Garden of Her Heart Sale

Eighty years ago today, Civilian Exclusion Order No. 25 and No. 26 demanded all Japanese people living in the assigned evacuation areas in Oregon, regardless of citizenship or birthright, report by noon to an assembly center in Portland.May 5, 1942, was a day when more than 3,000 “detainees” entered the Portland Assembly Center. In reality, the Portland Assembly Center had been the Portland Livestock Exposition Pavilion. The government housed the detainees under one roof there, using plywood to divide the space into apartments. The manure beneath the hastily constructed floor and the flies buzzing everywhere added to the trying conditions, especially during the summer months the Oregon evacuees were held before they were loaded on train cars and shipped to internment camps.Meals were served in a mess hall in shifts. Privacy was nonexistent. The “apartments” had enough floor space for about five Army cots. Rough eight-foot high plywood walls divided one family from another. With no ceiling, noises from adjoining families echoed day and night. The spiteful cruelty Japanese Americans endured during the war remains one of the bleakest moments in our history.   My heart continues to ache as I read and hear more Japanese American stories from World War II… stories of courage, strength, and hope in the face of great adversity. My first sweet World War II romance – Garden of Her Heart  shines a light on one fictional family’s story of what it was like to be a Japanese American in 1942.  The seed for that story was planted, quite appropriately, in a stunning garden. 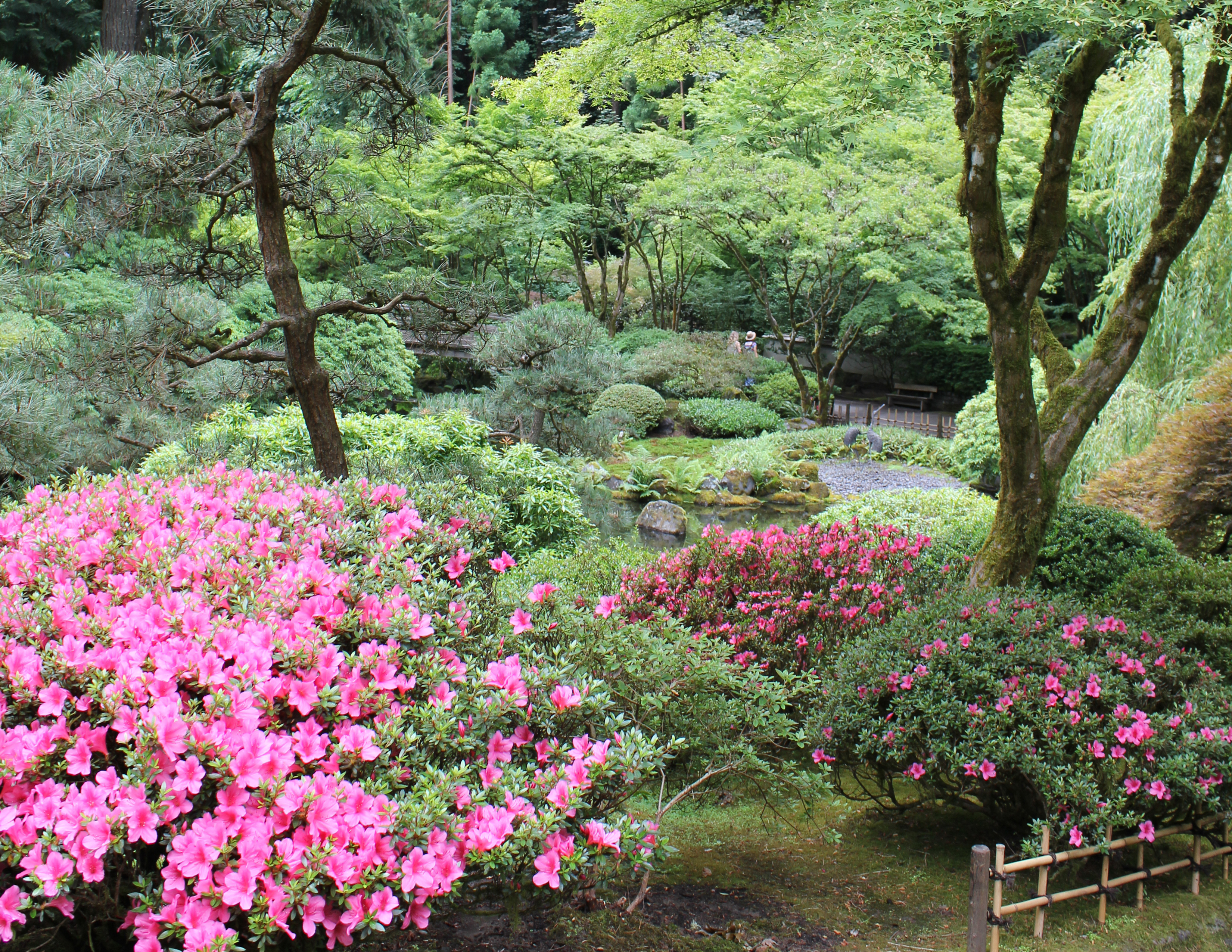 Picture a beautiful summer day when the sky is clear, the temperature is warm, but not uncomfortably so, and humidity nearly nonexistent.On one of those ideal summer days in Portland, Captain Cavedweller and I had climbed a hilly path to visit the Japanese Garden. We heard it was “nice” and “pretty,” but we had no idea what to expect.After we topped the hill and paid our admission at the little gate booth, we walked inside the garden, spellbound by the beauty around us. For a few minutes, we didn’t move, absorbed in the wonder of being transported to a completely different world in a matter of a few steps. The garden — oh, such a lovely garden. I highly recommend visiting it if you are ever in the area. There are ponds with bright orange fish, walking paths, raked sand, and a waterfall. In truth, in my mind’s eye, it is Miko’s secret garden, only bigger.It was while we wandered along the moss-covered stones and stepped across the wooden bridges that the idea for this story began to percolate. What if there was a girl who lived in a secret garden? Why would she be there? What scenario would drive her into hiding in a Japanese garden up on a hilltop that no one knew was there?As Captain Cavedweller and I ambled among weeping cherry trees and vibrant flowering bushes, I blurted out my thoughts. Then somehow, in a wonderful blending of ideas, we both arrived at the conclusion of World War II. A Japanese girl would have every reason to hide, had she the opportunity to do so, in 1942 when the government ordered all Japanese people living along the West Coast “military areas” to report to assembly centers.CC and I visited a wonderful museum in Portland called the Oregon Nikkei Legacy Center (now known as the Japanese American Museum of Oregon). Located in an area where the Japanese community used to have many businesses near downtown, the museum provided a glimpse into the internment experience.The photos and stories shared there broke my heart at what the Japanese Americans had endured.Those stories and images helped shape and inspire the characters in Garden of Her Heart.As I created Miko’s character, I tried to envision how desperate she would be to reach the assembly center on time. I imagined how terrified she would feel when she missed meeting that deadline because she stayed behind to save the life of a wounded soldier. 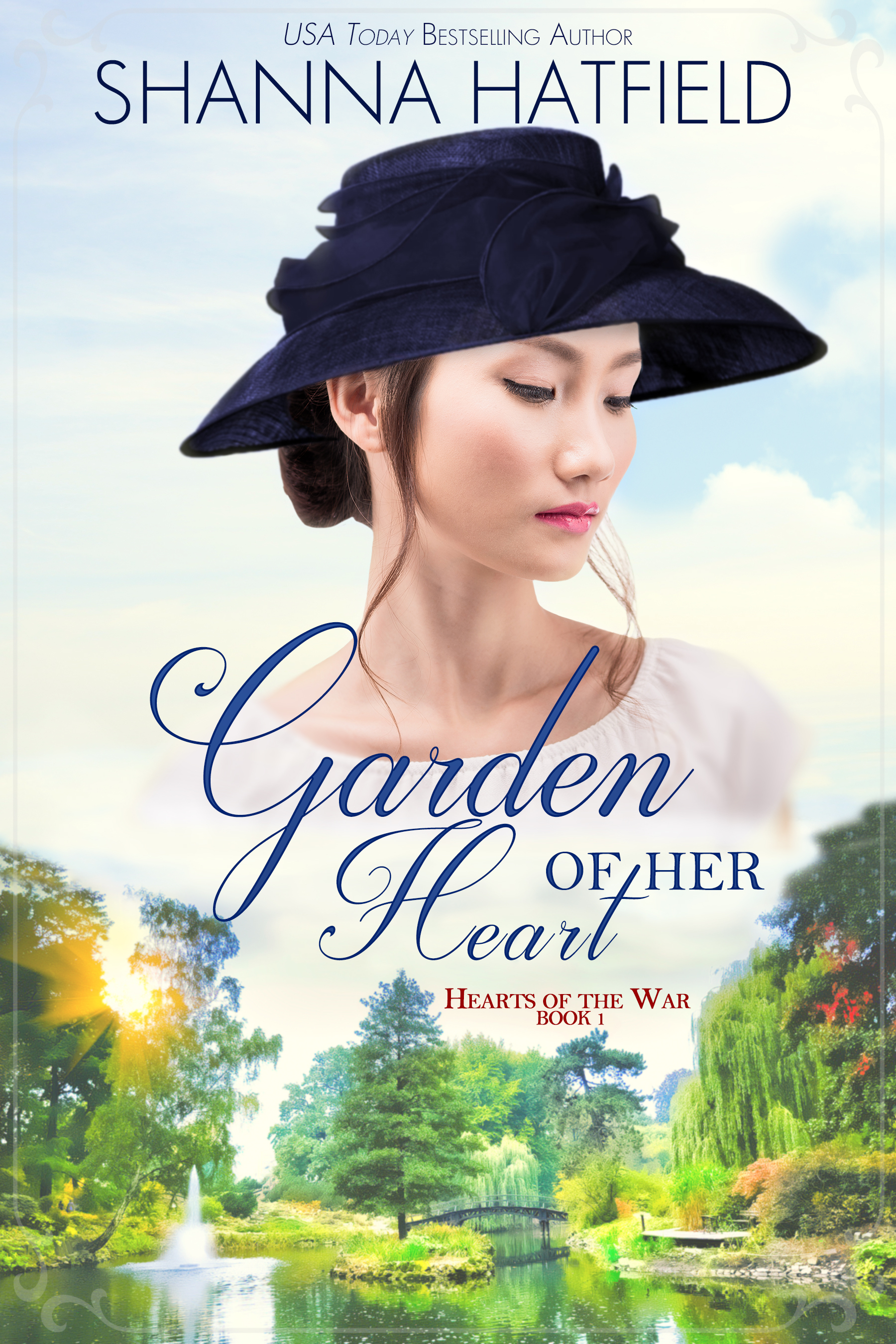 Winner of the Romantic Times Review Source Award and a RONE Finalist“Shanna Hatfield’s Garden of Her Heart is a warm and moving WWII story of a love hoping to bridge two cultures in a time of turmoil. Strong characters, historical authenticity, and unique twists of fate blend with details of American Japanese life near Portland Oregon and a wounded soldier’s love. It both informs and inspires. Readers will remember this unique romance that blooms in the garden of the spirit and the heart.”

Can forbidden love blossom amid the constraints of war?    The moment the Japanese bombed Pearl Harbor, life shifted for Miko Nishimura. Desperate to reach the Portland Assembly Center for Japanese Americans, she’s kicked off the bus miles from town. Every tick of the clock pushes her closer to becoming a fugitive in the land of her birth. Exhausted, she stumbles to her grandparents’ abandoned farm only to find a dying soldier sprawled across the step. Unable to leave him, she forsakes all else to keep him alive.   After crashing his plane in the Battle of the Atlantic, the doctors condemn Captain Rock Laroux to die. Determined to meet his maker beneath a blue sky at his family home, he sneaks out of the hospital. Weary and half out of his mind, he makes it as far as a produce stand he remembers from his youth. Rather than surrender to death, Rock fights a battle of the heart as he falls in love with the beautiful Japanese woman who saves his life.   A poignant, sweet romance, Garden of Her Heart proves love can bloom in unlikely places even under the most challenging circumstances.

Here is a snippet from the book:

A white picket fence surrounded the cheery yellow bungalow home her grandparents had built in the mid-1920s. With a wide porch and a plethora of flowers surrounding all four sides, the house appeared welcoming. Beyond the yard, a barn and large storage building, along with a collection of outbuildings, alluded to a prosperous farm.With a prayer to find her family waiting inside for her, she raced up the front steps of the porch and tried the door. The knob rattled but didn’t turn, locked from the inside. Miko set down her suitcase and rushed around to the back door. In her haste, she tripped over the body of a man as he sprawled across the back step.Unconscious, the uniformed soldier shuddered against the chill in the air, his clothes every bit as wet as hers. At least his jerky tremors assured her he wasn’t dead.Panicked, she pounded on the door. “It’s Miko! Open the door! Please!” Fist banging against the wood, she called out to her grandparents, willing them to be there.All remained eerily silent in the house. Single-minded in her efforts to enter the dwelling, Miko stepped over the man and lifted a brick from the border edging the flowerbed. With a spare key in her hand, she jammed it in the lock and pushed the door open, rushing inside.She flicked on the lights in the kitchen and walked through the house, stunned by the empty stillness. On the verge of hysteria, she even checked the basement, but no one was there.Back in the kitchen, she noticed an envelope on the table with her name written across the front in her father’s bold script.Fingers clumsy with trepidation, she opened it, heartsick as she read the words. Dear Kamiko,I’m glad you made it safely to the farm. We waited as long as possible for you to arrive. I’m sorry we couldn’t wait a moment longer. The transportation we arranged to take us to the assembly center has arrived and we must go.The orders say anyone not at the center by noon tomorrow will be prosecuted to the full extent of the law. For your sake, I hope you make it before the deadline. You need to come to the Pacific International Livestock and Exposition Center on the north end of town on Swift Boulevard.In the flurry of selling my business and our home, of packing up our belongings and moving them here, we simply put off contacting you. Now, I realize the grave error of that decision. I’m very sorry, daughter, that we didn’t contact you sooner and give you ample time to travel home.We all hope to see you soon, my beloved girl. No matter what happens, know that we love you. I admire the beautiful, strong, independent woman you have become.Regardless of what the future brings, take care and do what you think is best, Miko.All my love,Papa Miko reread the missive and laid the sheet of paper on the table. She had several hours to figure out a way to make it to the assembly center before the deadline.Suddenly, she recalled the man outside and dragged him into the house using the last ounce of strength she possessed.Worn beyond endurance, she sank onto a kitchen chair and glared at the handsome soldier as shivers besieged his body. “What am I supposed to do with you?”

Today, through this weekend, Garden of Her Heart is on sale for 99 cents on Amazon, or you can read it through Kindle Unlimited. You’ll also find it on Audible. If you haven’t yet, I hope you’ll read this poignant, heartwarming story that proves love can triumph over all. And if you’re already read the book, please think about telling a friend to download their copy while it is available at this special price.