Lake Bride – behind the scenes

Sometimes ideas for books come from the most unexpected places.

My dad’s cousin, JJ, often sends him funny quotes or memes, or things to make him smile. He also shares interesting tidbits of information. Dad chooses the things he likes best and sends them on to me.

One of his “chosen favorites” from JJ was a lovely post written about the soldiers who guard the Tomb of the Unknown Soldier at  Arlington National Cemetery.  I’d heard of the cemetery, had never visited it, and knew there were guards, but that was about the extent of my knowledge when I opened that email from dad.

After reading what was shared, I had to know more. I needed to know more about the soldiers who guard the Tomb and the cemetery. And that knowledge led to me writing a sweet contemporary romance about a Tomb Guard, a nurse, and an array of wacky wildlife. 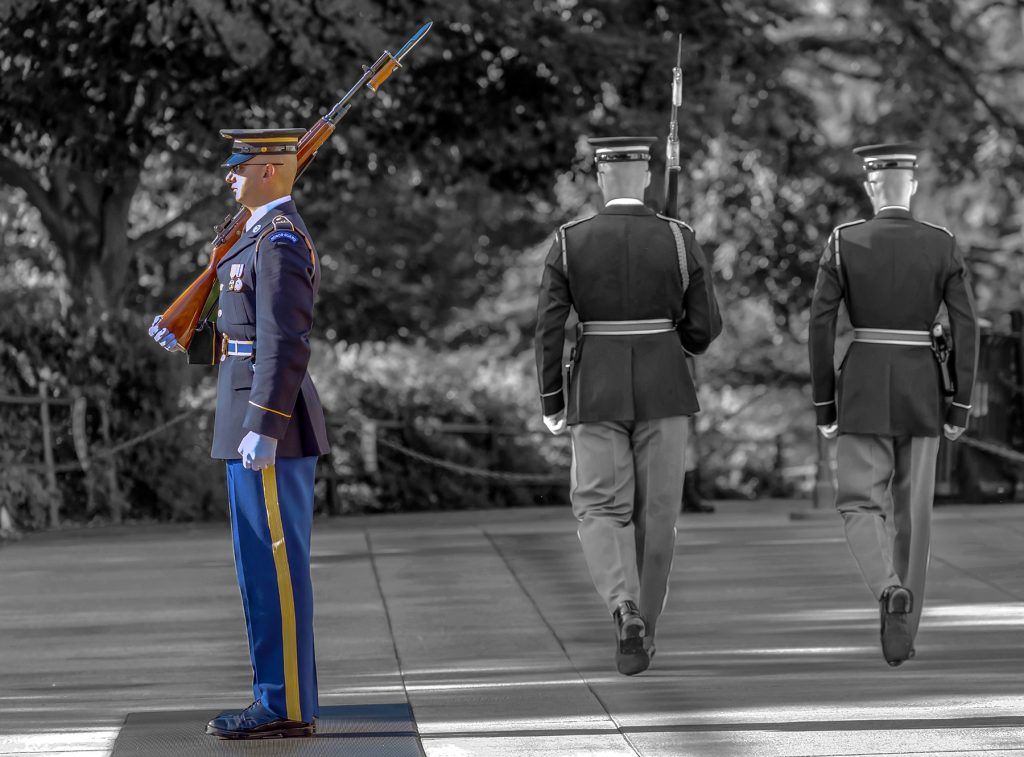 I have a deep respect for those who serve. It just seemed natural after learning about the sentinels who guard the Tomb, to write a book about a soldier who is just finishing up his term of service as a guard. I could just imagine Bridger, my hero, needed the order and honor this position demands after suffering something traumatic.

Soldiers who volunteer to become Tomb guards must go through a strict selection process and intensive training. Each element of their routine has meaning. The guard marches 21 steps down the black mat behind the Tomb, turns and faces east for 21 seconds, turns and faces north for 21 seconds, and then takes 21 steps down the mat. Next, the Guard executes a sharp “shoulder-arms” movement to place his/her weapon on the shoulder closest to the visitors, signifying that he or she stands between the Tomb and any possible threat. The number 21 symbolizes the highest symbolic military honor that can be bestowed: the 21-gun salute.

Now imagine doing that in searing summer heat (in a wool uniform), in pouring rain, or freezing snow. It’s what they do. Every single day.

The Sentinels have a creed they live by. One of my favorite lines is this one: And with dignity and perseverance my standard will remain perfection. Oh, but if we could all live up to that creed.

In Lake Bride ( my sweet romance releasing tomorrow), Bridger has spent the past two years of his life as a sentinel. He’s at a crossroads in his life, trying to find himself and direction for his future. When his favorite relative, Uncle Wally, passes away and leaves him a cabin on a lake in Eastern Oregon, Bridger sees the perfect opportunity to get away and figure out what to do with the rest of his life.

If you read my book Henley that was part of the Love Train series, Bridger is a great-great-great-grandson to Evan and Henley Holt!

So, Bridger arrives in Oregon at the cabin to find an assortment of wildlife there, and an uninvited camper on the property. Little did Bridger know the woman who had sunshine in her smile, would shine her light into his soul. 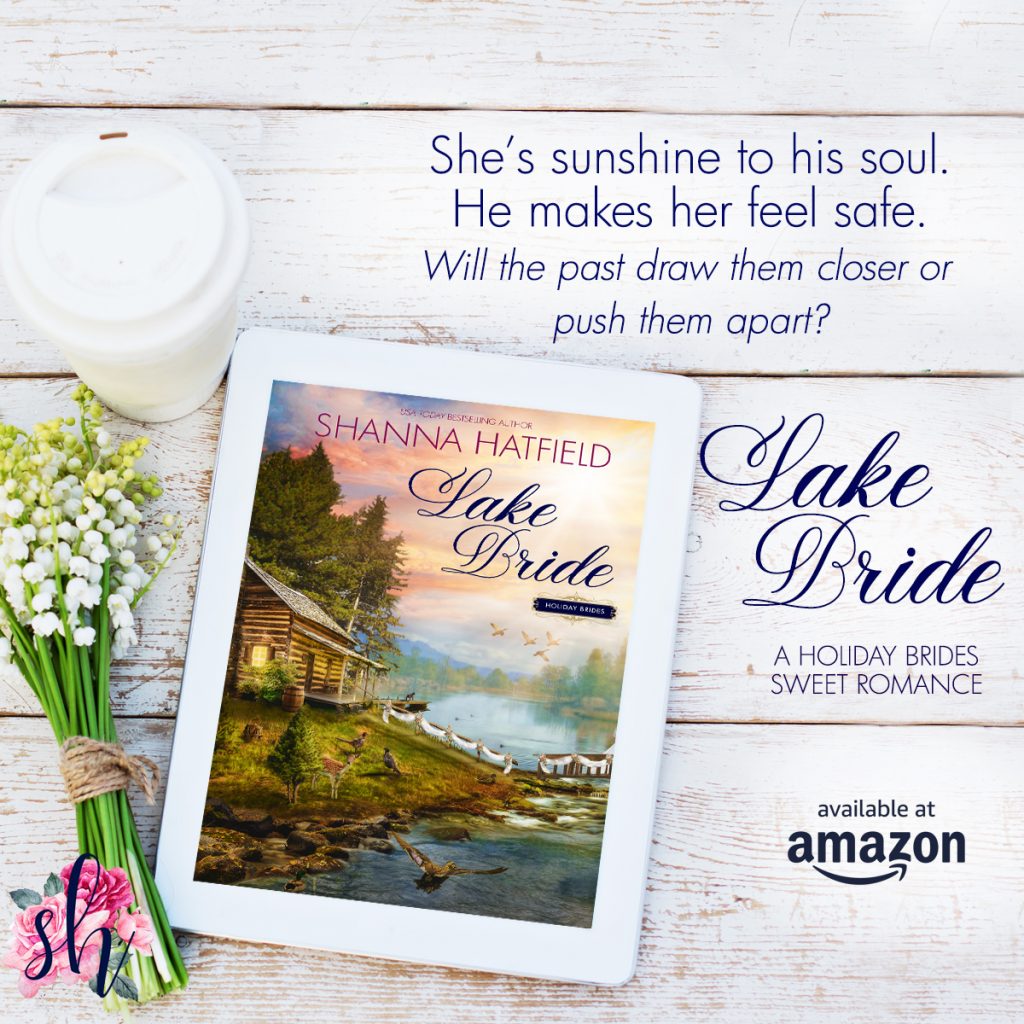 Absently, she wondered if the intruder would take her seriously if she brandished a weapon the same color as Barney the dinosaur.

Maybe it would be a better plan to call one of her friends and ask them to come to her rescue.

By the time someone drove out to where she’d parked on a little-used U.S. Forest Service road and hiked over a hill to reach her, Shayla concluded her dead body would likely be resting at the bottom of the lake.

“Get a grip, girl,” Shayla muttered under her breath. Obviously, she needed to stop enjoying so many police dramas on television. Perhaps she should listen to Fynlee and Sage James at HPH and watch a few of the sweet romances on the Hallmark channel.

Shayla glanced at the tent a few yards away, gauging if she had enough time to yank on clothes before the intruder appeared. If she pretended her life depended on it, which it might, she thought she could at least get a pair of pants and a shirt pulled on, which had to be better than a damp towel.

In her haste to reach the tent with her hiking boots untied and flapping loose, she tripped over a fallen tree branch. She would have sprawled on her face if a pair of muscled arms hadn’t caught her and kept her upright.

Something zinged up both arms, crossed in her brain, and traveled down to her toes, making goose bumps break out on her skin.

Her gaze traveled from the tanned, bulging bicep in front of her line of vision to a shoulder rounded with muscle, clearly defined by the crisp T-shirt the man wore. She tipped her head back and looked into a face covered by a dark scruff of whiskers. The roguish growth of hair failed to disguise his handsome features. His nose was a little too big and slightly crooked, like it had been broken at some point, but it enhanced his masculine appeal. A mole centered high on his left cheek did nothing to detract from his good looks. Her perusal took in eyes that were more gray than blue, rimmed with thick, dark lashes.

Why did guys always get the incredible eyelashes? Shayla wasn’t one who wore a lot of makeup, but she felt naked without at least a few coats of mascara.

She noticed the Army logo on the front of the ball cap tilted back on his short, dark brown hair as he studied her. His expression was unreadable, as though he’d be great at playing poker, although she detected a hint of humor mingling with surprise in his stormy eyes.

He relaxed his hold on her arms, and she took an unsteady step back, letting her gaze rove over him from head to toe. Her would-be assailant looked like he bench-pressed MINI Coopers instead of weights. His T-shirt, ironed with creases on the sleeves no less, molded to his chest, highlighting his sculpted muscles. Thighs the size of small tree trunks strained against the seams of the pressed cargo pants he wore.

Shayla sucked in a breath. She had no idea who the man was or what he was doing at her campsite, but if he planned to kill her, at least she’d die looking at a beautiful creation, and she didn’t mean the lake, or the woods.