Lessons from a Two-Year-Old 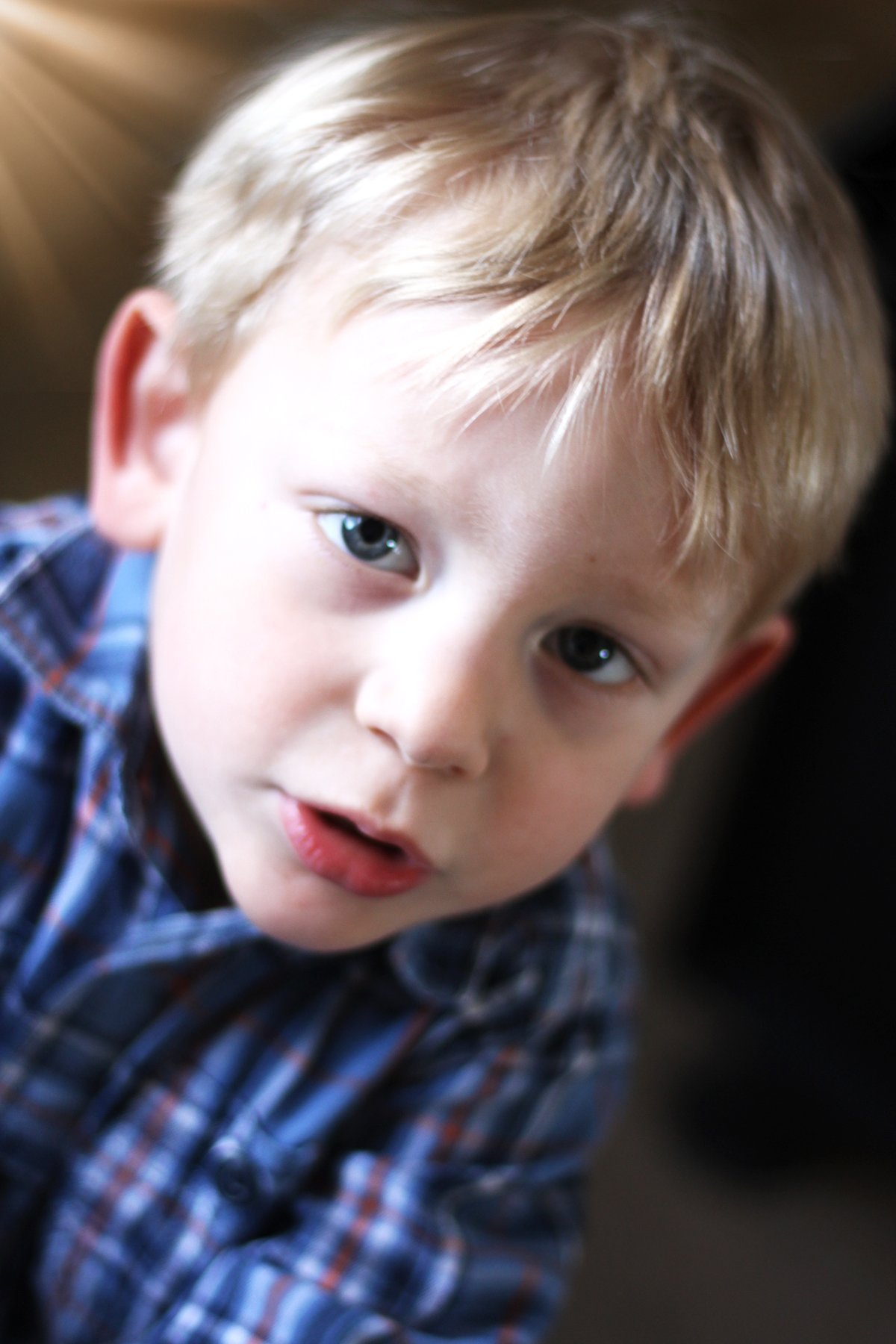 My niece’s adorable little boy just turned two. We took my dad and went to visit recently. While we were there, we learned several good life lessons from TJ.

I gave him a plush Peter Rabbit toy not long after he was born. According to his parents, Bunny, as TJ named it, has become his best friend. He hauls Bunny around with him almost everywhere (except outside to play. His mama tells him he doesn’t want Bunny to get all dirty. If TJ could form complete sentences, I think he’d say he doesn’t care about the dirt, he just wants Bunny with him wherever he goes!). He shares naptime with Bunny, and has to have Bunny with him before he can go to sleep at night. Bunny is important to TJ and he’s not afraid to let Bunny or anyone else know it. That we would treat all our friends (or spouses, or loved ones) with such devotion and care! 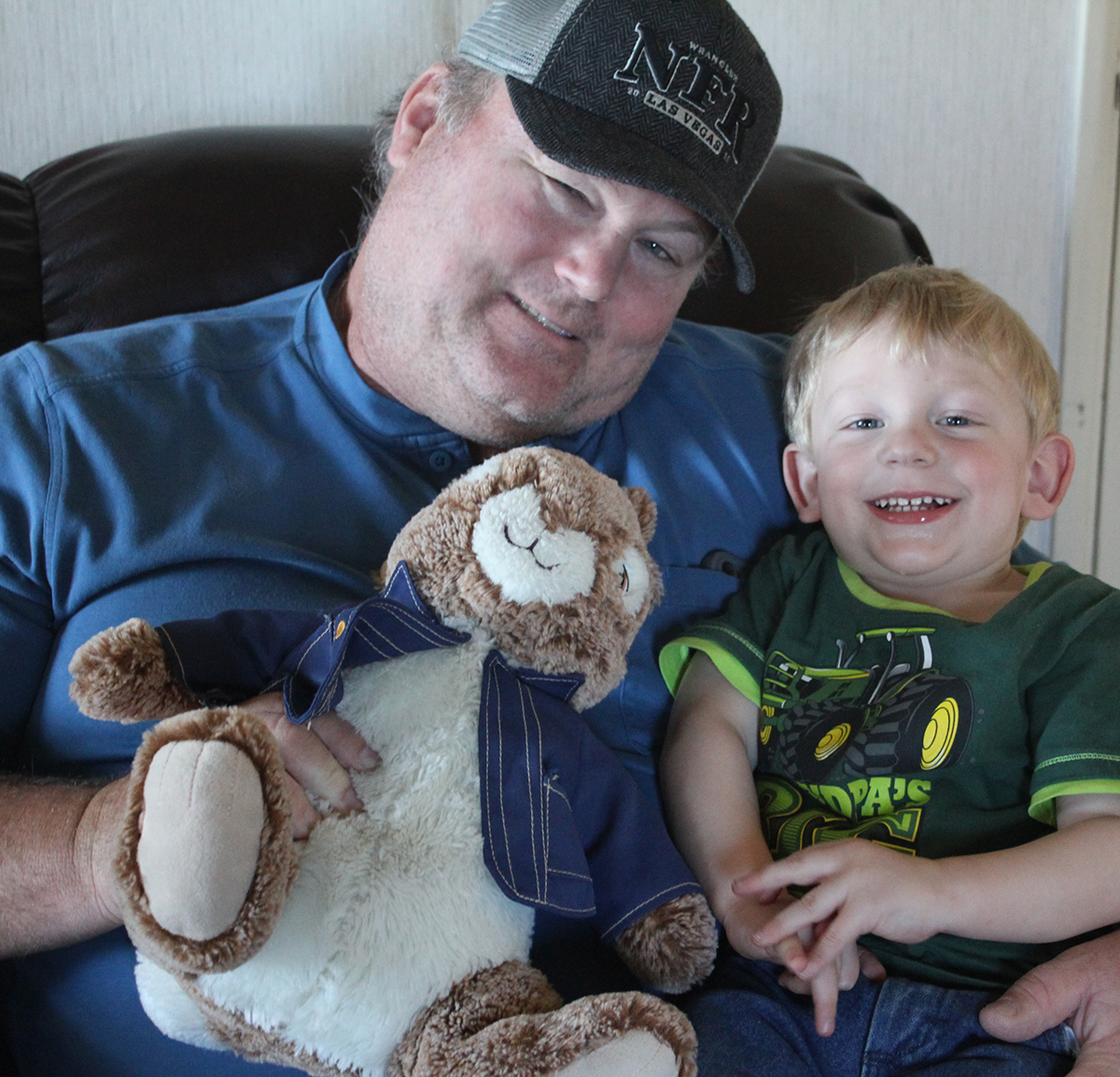 TJ is a little sweetheart and has no qualms about giving hugs or kisses whenever the mood strikes. Watching him give sweet kisses to my dad reminded me to be less reserved and more open about sharing affection with those I care for.

If TJ feels like dancing, or singing, or just giggling for no apparent reason, he does it. He’s also already figured out how to tease (case in point: one day when we got there, he went to CC and gave him a kiss, then turned and gave me a look that said “Ha, ha! I know you want one, but you’ll have to wait.” The little stinker did that for almost an hour before he finally gave me hugs and kisses.). Just watching him with joy lighting his face is a reminder to add more joy into my own life. Don’t be afraid to sing or dance, or break into giggles. I promise it will lighten your mood.

4. Be in Touch With Your Emotions

The evening we celebrated his birthday was right before Easter. So, we’d taken his birthday presents, and his Easter presents. His mama let him open whatever he wanted when he was ready to do so. He didn’t do it all at once, but opened one thing and took time playing with it before moving on to the next one. When all the gifts were opened, there was a moment when he seemed so overwhelmed by it all, or maybe it was just so grateful for his new things. He put his hands on his little cheeks and walked around the room, looking at his gifts saying “Oh, my! Oh, my!” My heart officially melted on the spot. The next morning when I was there, he and I played outside in his dirt box (it’s dirt, not a sandbox). It was a warm, beautiful day, and the sun was shining right into the box. TJ had been playing with some toys in the dirt, then stopped, shoved both hands in the dirt (which felt so warm and loamy) and began pushing through it with his fingers. He looked up at me with the widest, cutest smile on his face and said, “Happy! Happy!” And he was so happy with something as simple as dirt. It made me happy to watch him, and a little in awe that such a tiny little person is already in touch with his emotions and not afraid to express them. I need to be more like that sweet uninhibited little person.

TJ is inquisitive and (not that I am biased in the least) clever, and has no hesitation about trying something new. His grandparents got him a John Deere (another of his favorite things) tricycle for his birthday. It took him no time at all to climb on it and stretch to reach the pedals. It made me think of all the opportunities I’ve let float on by because I was too afraid to climb aboard and stretch beyond my comfort zone.  Trying new things can be wonderful. If you don’t believe me, ask TJ. 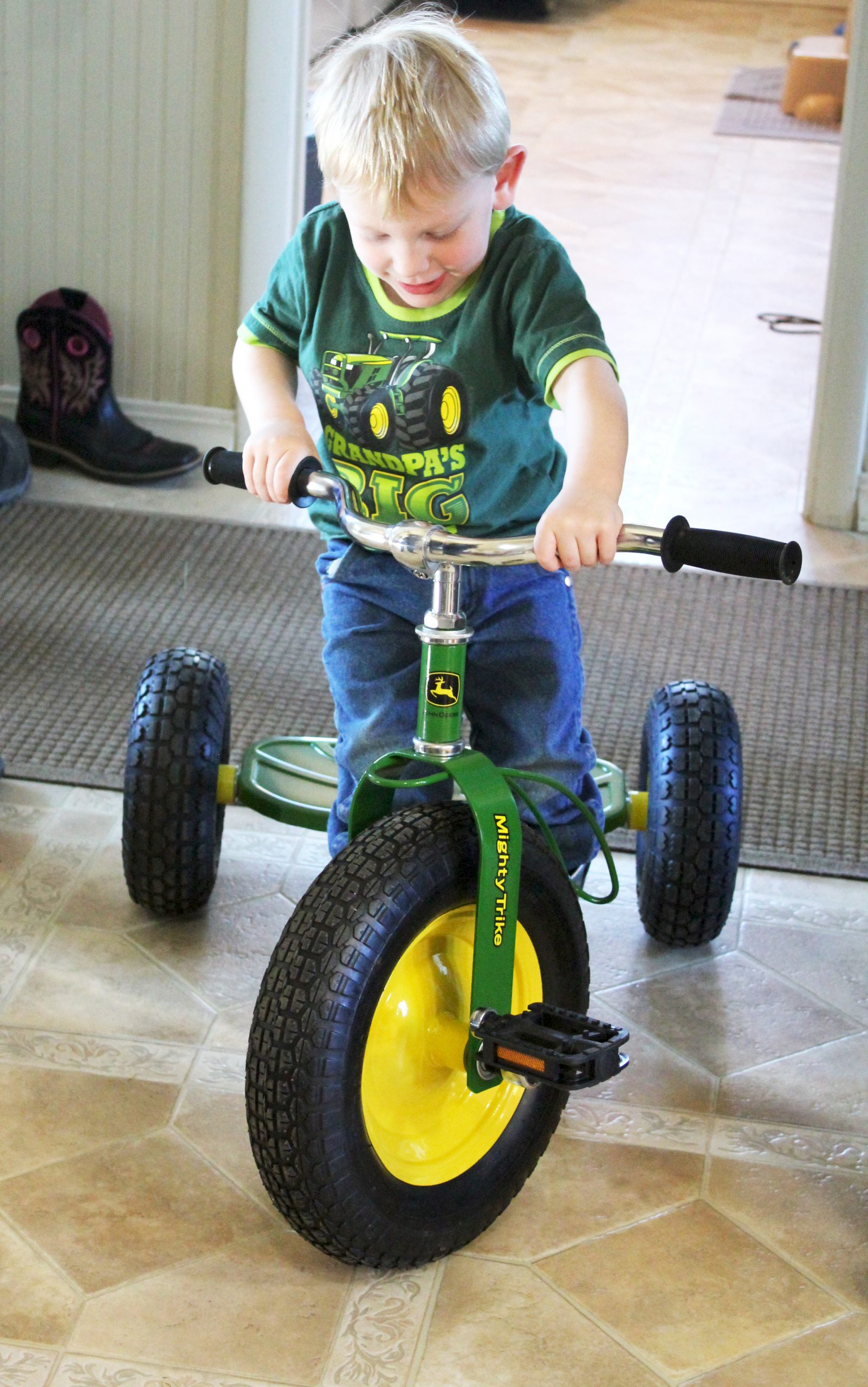 6. Ask for what you want

Even at the tender age of two, TJ has already figured out if you ask for what you want, it greatly increases the odds of getting it. Like the Flopsy Bunny I brought for his baby brother that TJ thought would be good for his Bunny to have as a companion. If you never say what it is you want, it’s going to be hard for anyone to help you receive it. How often do we know exactly what we want, but we’re too afraid to communicate it, sometimes even with ourselves? Don’t let fear hold you back. Ask!

7. Work for what you want

Since TJ is just two, and learning new words by the minute, there are times no one knows exactly what it is he wants. However, he’s not the least bit afraid to work for what he wants. For example, while his mother was nursing his little brother in the other room, I was cleaning up the lunch dishes. TJ came over and patted my leg and said something I couldn’t understand.

“What’s that, buddy? What do you need?” I asked as I dried my hands on a dish towel and bent down beside him.

He repeated it. I still didn’t get it, but CC figured out he wanted a cookie.

“Sorry, TJ, but I don’t think your mama wants you to have a cookie right now.”

“Cookie!” He pointed to a cabinet door held shut with a baby lock.

I made a grand show of trying to get the lock off, and pretended I couldn’t. I threw my hands up in the air and said, “Sorry, I can’t get it open.”

Much to my surprise, TJ immediately began fiddling with the lock, promptly removed it, yanked open the door, and pointed to a package of cookies. “Cookie!”

He worked so hard for it, I had to give him one. (Sorry, Amanda!)

TJ is in the midst of potty training. It’s not his favorite thing to do, but when he does it, he gets a little reward. He is all about the rewards. And he knows if he goes all in (bad pun intended) and strives to earn his reward, he’ll achieve it. How much would I accomplish if I went all in on my goals, and strived with such intent focus toward the things I want to achieve?

9. Have the proper tools to get the job done

Naptime doesn’t come easy for TJ. He’s a busy boy with so many things he and Bunny need to see to in the day. But when he’s ready for a nap, he gathers his “tools” and heads to bed. That particular day the “tools” included a John Deere tractor flashlight, a new wooden truck with horses (thank you, Tonya), and Bunny. Once he had them all in his arms, he turned around to tell everyone “Night Night” then started to take himself up to bed. He had a job to do (nap) and knew that job required certain tools (his selected toys) before he could get it done. It’s not just about having the right tools when you need them, it’s also about being prepared for the task at hand. Note to self to gather what I need before I jump into my next endeavor.

TJ is great about sharing. He’ll stuff a Goldfish cracker in your mouth, offer a bite of his lunch, or bring over a storybook and climb onto your lap if he thinks you might need it (and may possibly read it to him). He’s also wonderful about bringing his things to his baby brother when he cries, wanting to share what he can to comfort him.  It made me wonder how often I’m willing to share (not my crackers) things that might be a help to others, things that bring comfort or  hope, or maybe even a smile. Sharing is a gift, both to the giver and recipient, so I need to be more like TJ and openly share with those around me.

I’m looking forward to my next visit with TJ. As quickly as he’s growing and changing, who knows what I’ll learn next!