Midway, A Museum, and Dream of Her Heart

A few weeks ago, when Captain Cavedweller and I were in San Antonio, we rented a car and made the drive to Fredricksburg, Texas, to visit the National Museum of the Pacific War.  The six-acre complex is the only one in the continental US centered on World War II’s Asiatic-Pacific Theater World War II.

More than 50,000 square feet of indoor exhibits, state‐of‐the‐art archives and collections, and interactive media presentations, in addition to outdoor exhibits and memorials are located in the town that was the boyhood home of Fleet Admiral Chester W. Nimitz, Commander-in-Chief of Allied Forces, Pacific Ocean Area. At one point in the war, Nimitz commanded more than two million men and women, 5,000 ships and 20,000 planes. He was born February 24, 1885, to a widowed mother and grew up in the small German community of Fredericksburg. He lived with his mother at Grandfather Nimitz’s famous steamboat-shaped hotel, where he grew close to his grandfather.

In December 1941, when the Japanese Imperial Navy attacked Pearl Harbor, Nimitz was serving as Chief of the Bureau of Navigation in Washington D.C. President Roosevelt chose Nimitz from among 28 flag officers senior to him to relieve Admiral Kimmel at Pearl Harbor.

This proved to be an excellent choice. As Commander-in-Chief, Pacific, Admiral Nimitz was the right man in the right place at the right time. When America’s morale was at a low point, he restored it along with devastated Pacific Fleet by creating an aggressive combat team. Through his leadership and direction, the Battle of Midway became a turning point for American in the war. Midway is considered, even to this day, the U.S. Navy’s greatest victory. In 1944, Nimitz was promoted to Fleet Admiral — he was one of only four during this time: William D. Leahy, Ernest J. King, William “Bull” Halsey, and Nimitz. Aboard the battleship Missouri anchored in Tokyo Bay on September 2, 1945, Nimitz signed the Japanese Instrument of Surrender on behalf of the United States. A few weeks later, he relinquished his command at Pearl Harbor aboard a submarine. Appointed Chief of Naval Operations, he began the endeavor of demobilizing all but a fraction of what is known as the most powerful Navy in history.

CC and I arrived at the museum shortly after noon. The staff were literally nudging us out the doors at 5 p.m. when they closed  – and we’d only made it through one indoor exhibit building. It was one of the most incredible, thorough, educational, and fascinating museums we’ve visited. 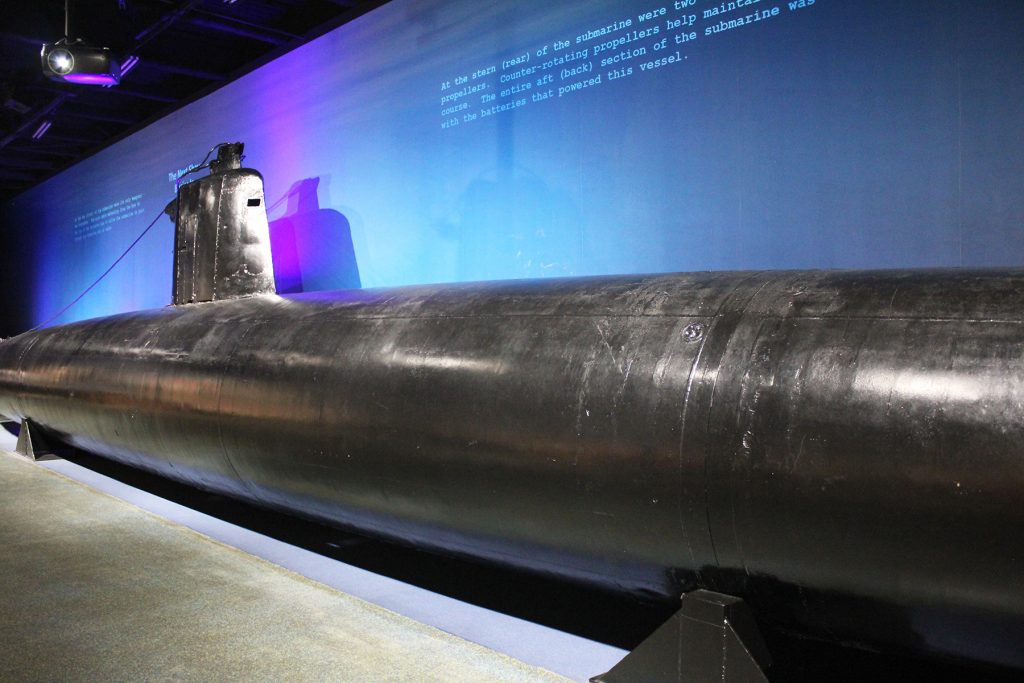 Among the many, many displays, artifacts, and exhibits was this 40-ton, 76-foot-long Japanese mini-submarine, one of five used in the attack on Pearl Harbor. 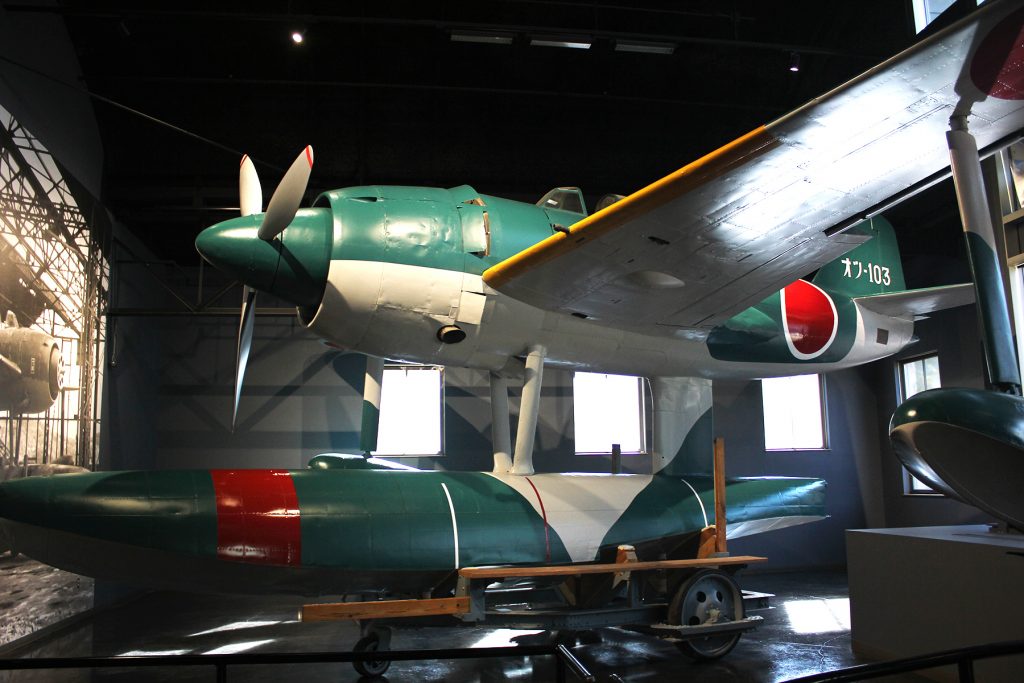 A rare Japanese float plane was also on exhibit. They came into service in 1943, but were designed to support offensive efforts in advance of available airstrips. When the plane was finally ready for manufacturing, the Japanese were on the defensive and the plane didn’t fit current mission needs. Only 89 were delivered into service when production came to an abrupt halt.

There was a section about women in the war I found particularly interesting, like this brochure distributed by the U.S. Marine Corps Women’s Reserve.

And the story about Guy Gabaldon is worth looking up for more detail. He was living with a Japanese American family when the orders came for the family to report to an assembly center. He was interned with them before he enlisted in the Marine Corps and served as an interpreter. 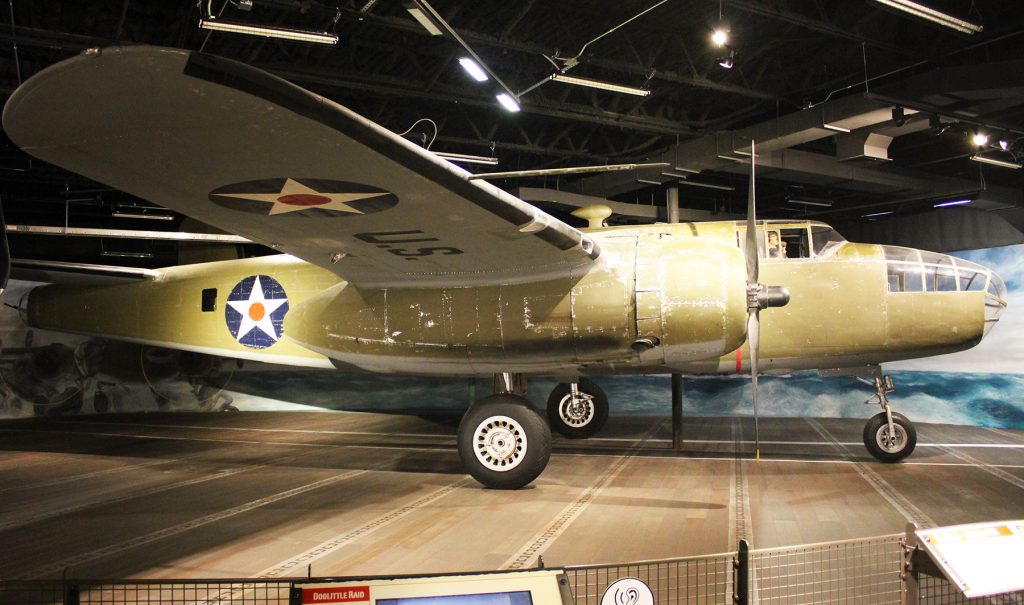 One of the things I got most excited about seeing was this  North American B-25 Mitchell plane.  In April 1942, eighty men led by Colonel Jimmy Doolittle (79 of whom had been stationed at Pendleton Air Field when they were originally called on to join the mission) flew specially outfitted B-25s off a carrier in the Pacific Ocean and dropped bombs on Tokyo and surrounding cities in what was known as the Doolittle Raid (and also the Tokyo Raid). It was the first attack from America on Japanese soil and served as retaliation for Pearl Harbor as well as proving Japanese vulnerabilities on their mainland. Although I’ve spent hours studying them, learning about them for my Hearts of the War series, this was the first time I’d seen one in person.

Among Japan’s aggressive goals during World War II was to remove the United States as a Pacific power and take over territory in east Asia and the southwest Pacific. They planned to defeat the US Pacific Fleet and use Midway as a base for attacks. Only the U.S. knew the Japanese were planning an attack in the Pacific, they just weren’t sure where. The Navy had cryptanalysits working to break Japanese communication codes. Through their work, the code was cracked and the attack location and time confirmed.

In the early morning hours of June 4, aircraft from four Japanese aircraft carries attacked and damaged the US Base no Midway. However, US carrier forces were just east of the island and ready for battle. 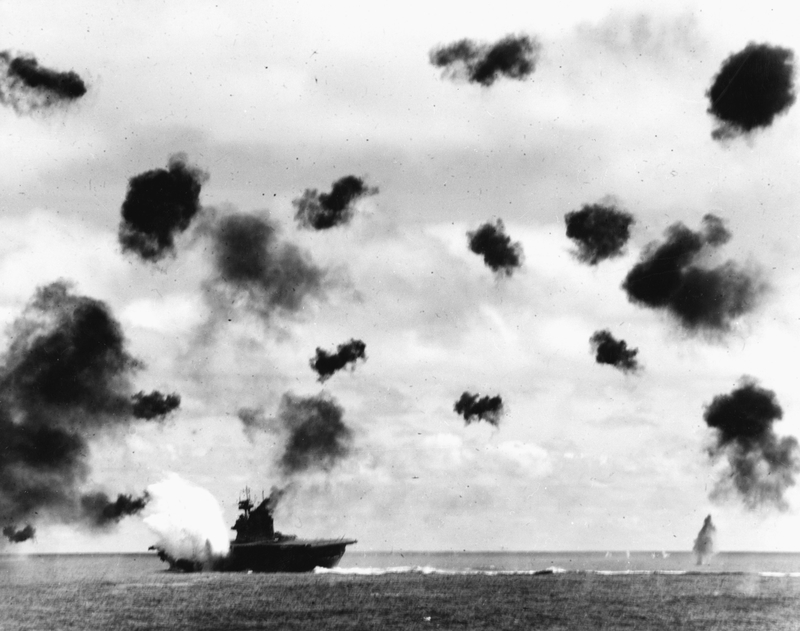 I don’t know about all of you, but I’m looking forward to the new Midway movie releasing today. Based on the story of the attack on Pearl Harbor and Battle of Midway, the film is being released by Lionsgate. A passion project of  Director Roland Emmerich, the film features a great cast with Ed Skrein, Patrick Wilson, Luke Evans, Aaron Eckhart, Nick Jonas, Mandy Moore, Dennis Quaid, and Woody Harrelson. Here’s a trailer of the movie, if you haven’t yet seen it:

The other thing that is fun and exciting is that the Battle of Midway is played out in an action-packed scene in my book Dream of Her Heart. And the book is on sale for just 99 cents this weekend!

Step back in time to 1942 with a sweet, charming World War II romance full of history, heart, and a happily ever after. The book is a sweet, sometimes funny, and definitely heartwarming romance between Captain Zane West of the United States Army Air Force and nurse Billie Brighton.

Here’s an excerpt from the Battle of Midway: 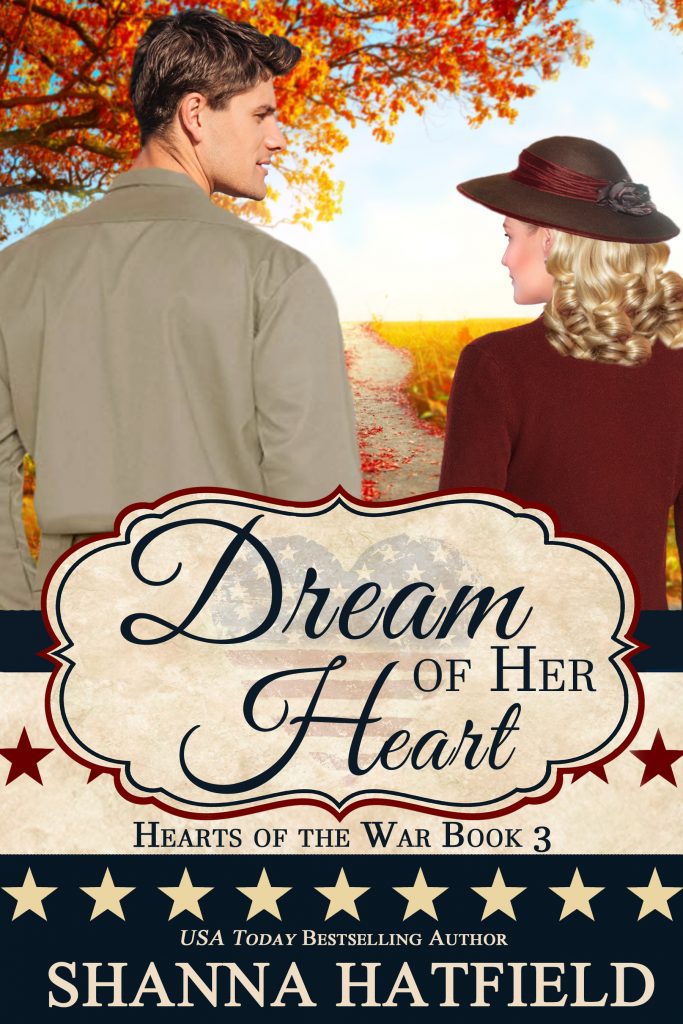 Zane and his crew, along with eight other crews, raced to their B-17s to take to the skies. Realizing he’d forgotten something important, at least to him, Zane sprinted back to his bunk and grabbed the scarf Billie had given him.
He didn’t believe in good luck charms, but he hadn’t flown without it since she’d placed it in his hand and he sure wasn’t going to start now. Quickly tucking it inside his pocket, his long strides carried him to the Tornado. As soon as he climbed behind the controls of the plane, they rushed to the runway and took off to attack the convoy.

“We’re gonna nail ’em, but good, Tex!” Bud exclaimed as they zoomed across the sky toward their destination. The men were in high spirits as they crossed more than five hundred miles and came upon the Japanese ships.

Under the direction of the officer leading the charge, Zane’s crew dropped bombs from high in the sky and watched geysers erupt when the bombs exploded in the water. In total, more than thirty demolition bombs, each weighing six hundred pounds, had been dropped before they flew back to Midway.

“You think we wiped ’em out?” Bud asked as they fell into formation on the flight back.

“I don’t know, Bud. It’s hard to tell from this height. I doubt we got them all, but hopefully it shook them up enough they’ll think twice about continuing with their plans, whatever they might be.” Zane glanced down at the clouds below them, wondered how many more enemy ships drew closer to Midway.

The enormity of what they needed to do, what was at stake if they failed to defend the island, washed over him, leaving him nervous, yet determined.