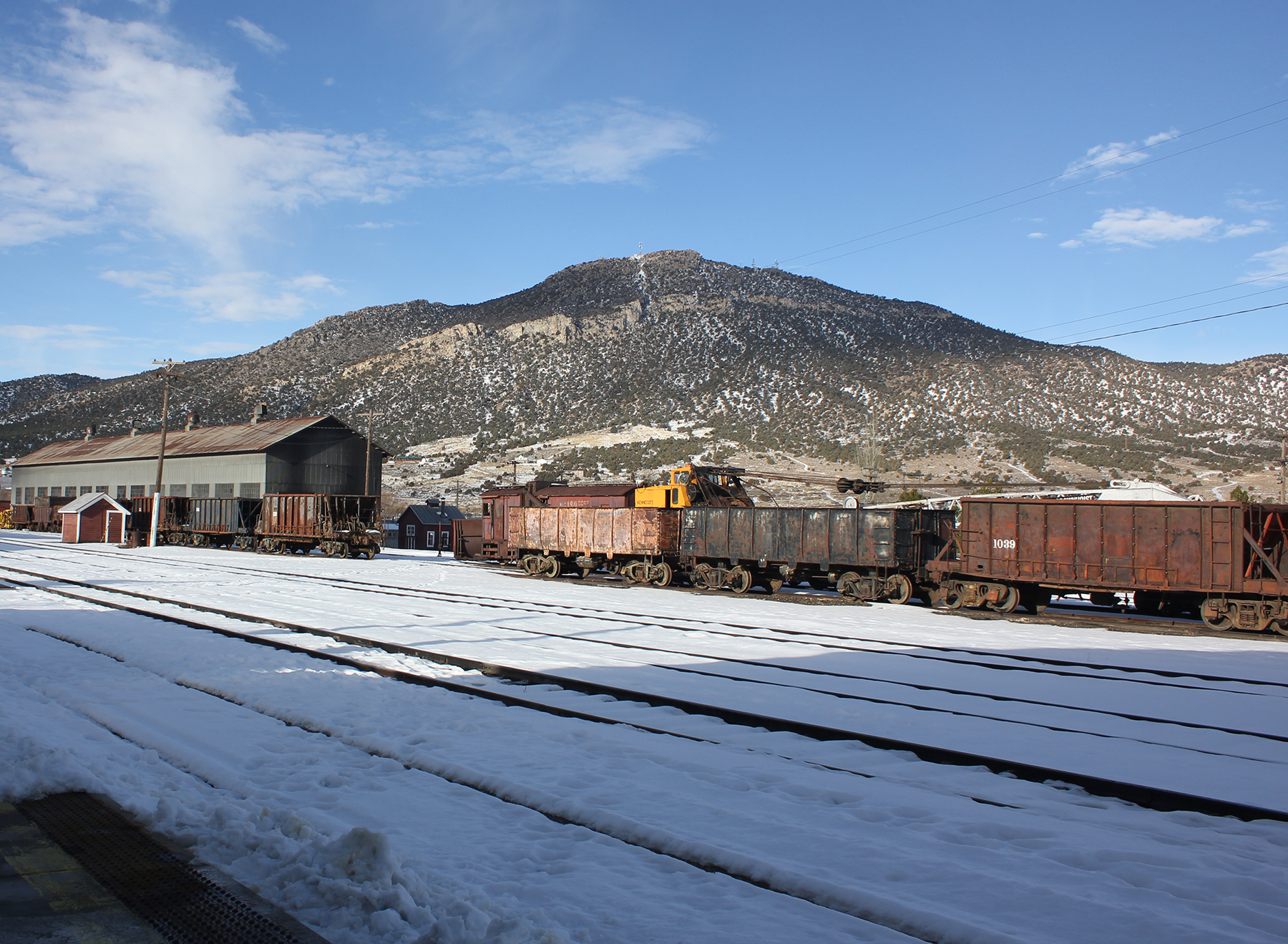 Last month, Captain Cavedweller and I had the opportunity to stop at the Nevada Northern Railway museum in Ely, Nevada.

The day was gorgeous with bright blue skies – and cold temps that went with all the snow on the ground, but it was perfect for exploring.

The museum is a national historic landmark, but it’s also an operating historical railroad. The brochure they give you in the gift shop says: “It’s gritty. It’s dirty. It smells of coal smoke, creosote, and sweat…” They aren’t exaggerating. 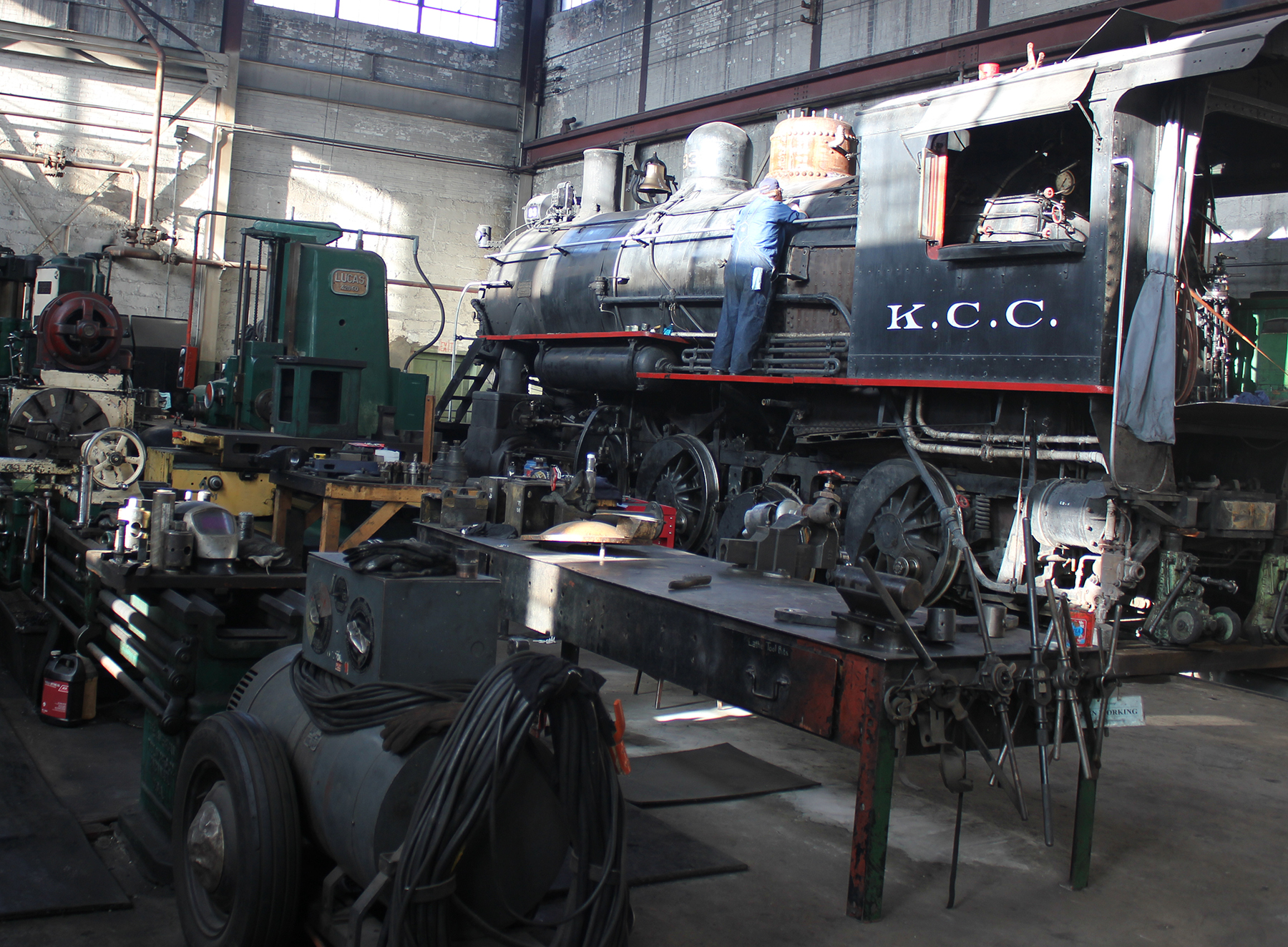 But it is such a neat place to visit because you can actually walk into the engine house and watch the mechanics working on train repairs. Right after I snapped this photo, a guy popped up in the smokestack. It’s just so interesting and fun to get to see everything up close and first hand. 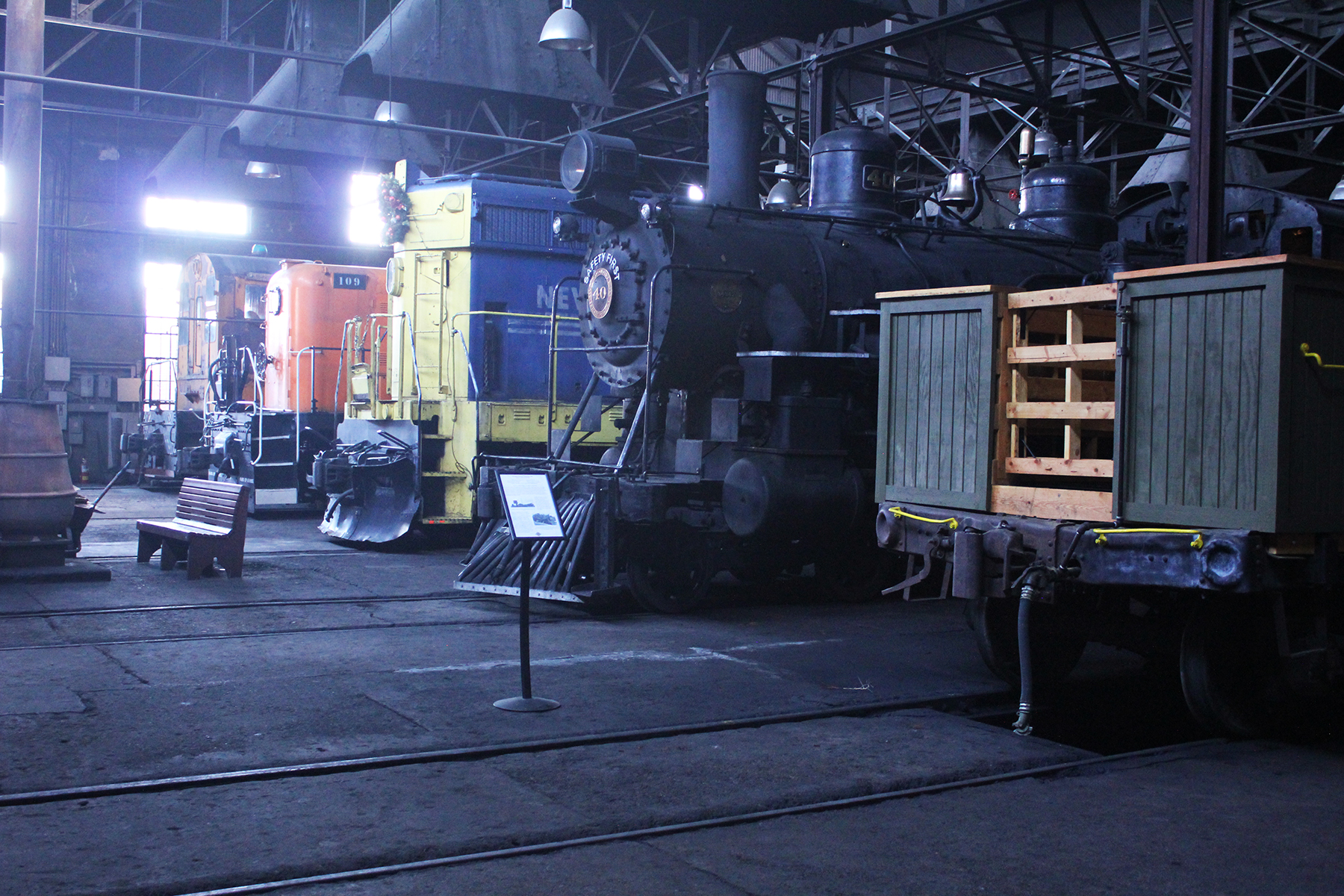 There were also a bunch of trains on display. Some of them you could even climb in and take a look around. 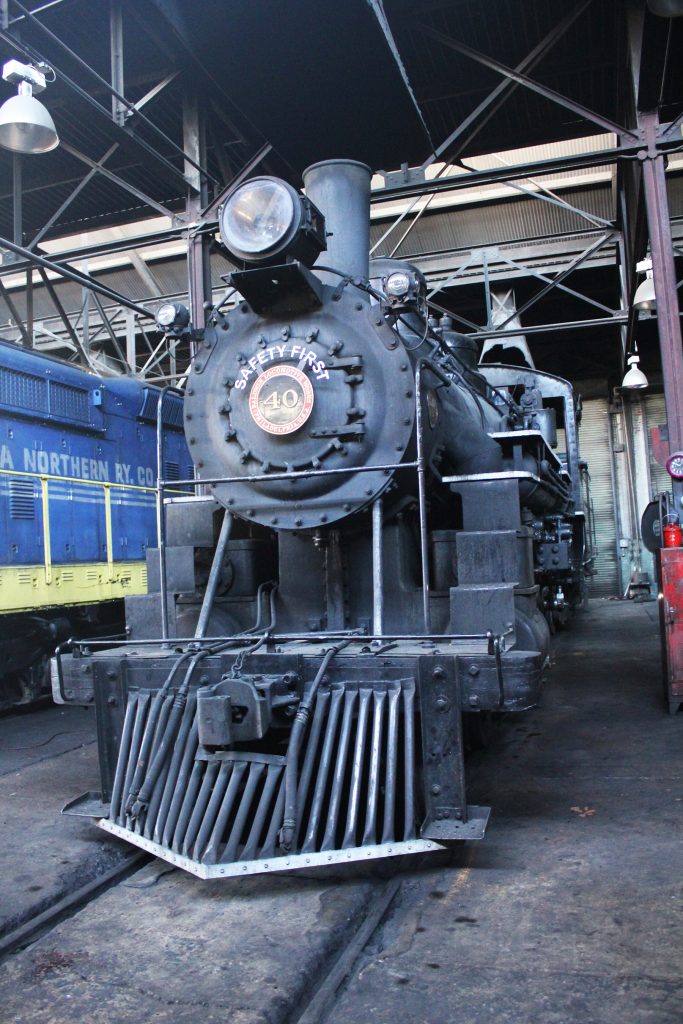 I loved this train. It made me think of the Polar Express.

In 1910, the railroad needed a new locomotive to pull the passenger train on a daily round-trip from Ely to Cobre, hauling passengers, mail, and express shipments. Number 40 was purchased from the Baldwin Locomotive Works for a cost of $13,139. The train entered scheduled service with a speed of 40 miles per hour pulling a railway post office/baggage car and a first-class coach, both of which are still in service at the museum. When the locomotive was no longer needed after World War II, #40 was put on the list to be scrapped. Because the crews loved the engine, it mysteriously disappeared whenever someone in authority came looking for it. Because of the ghost-like movements of the engine, it became known as “The Ghost Train.”  Thanks to the efforts of the crews, the train survived and still operates today, pulling passengers along the track. 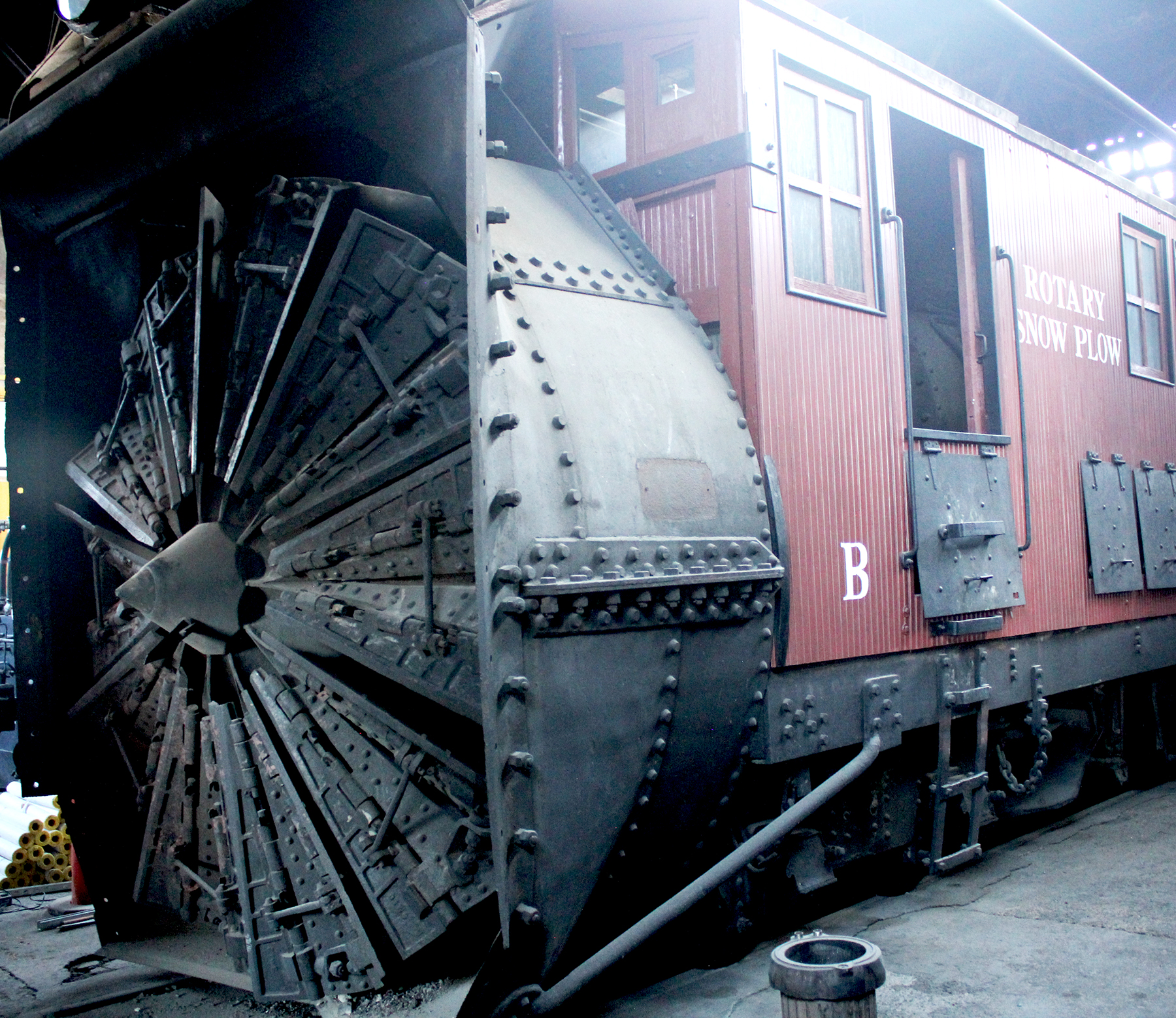 Another fun thing to see was this rotary snow plow. After a massive snow storm halted operations in 1907, the railway purchase a snow plow. The rotary blade could slice through drifts of snow and keep the track operation. A steam boiler resides inside a wooden body, but instead of turning the wheels on tracks like a regular locomotive, this one turns the massive blade. It could take up to three engines to push the plow through the snow. 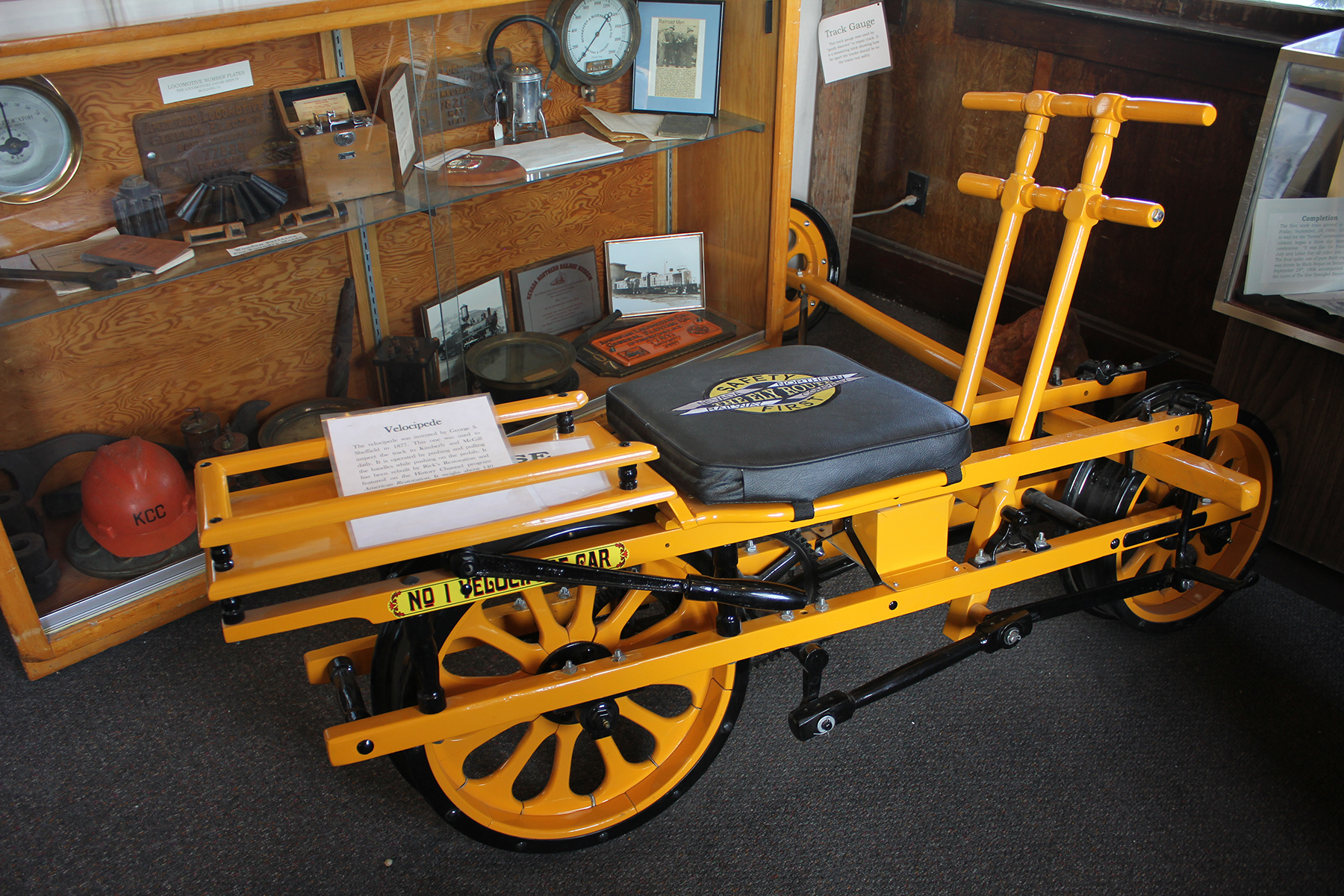 In addition to seeing the locomotives, there were several displays with interesting historical items and information. The velocipede was invented by George S. Scheffield in 1877. This particular one was used to inspect the track from Ely to Kimberly and McGill daily. It is operated by pushing and pulling the handles while pushing on the pedals. Weighing only 140 pounds, it could be moved off the track by one person. This velocipede was rebuilt by Rick’s Restoration and featured on the History Channel program American Restoration. There were several pieces of equipment Rick’s Restoration had restored. 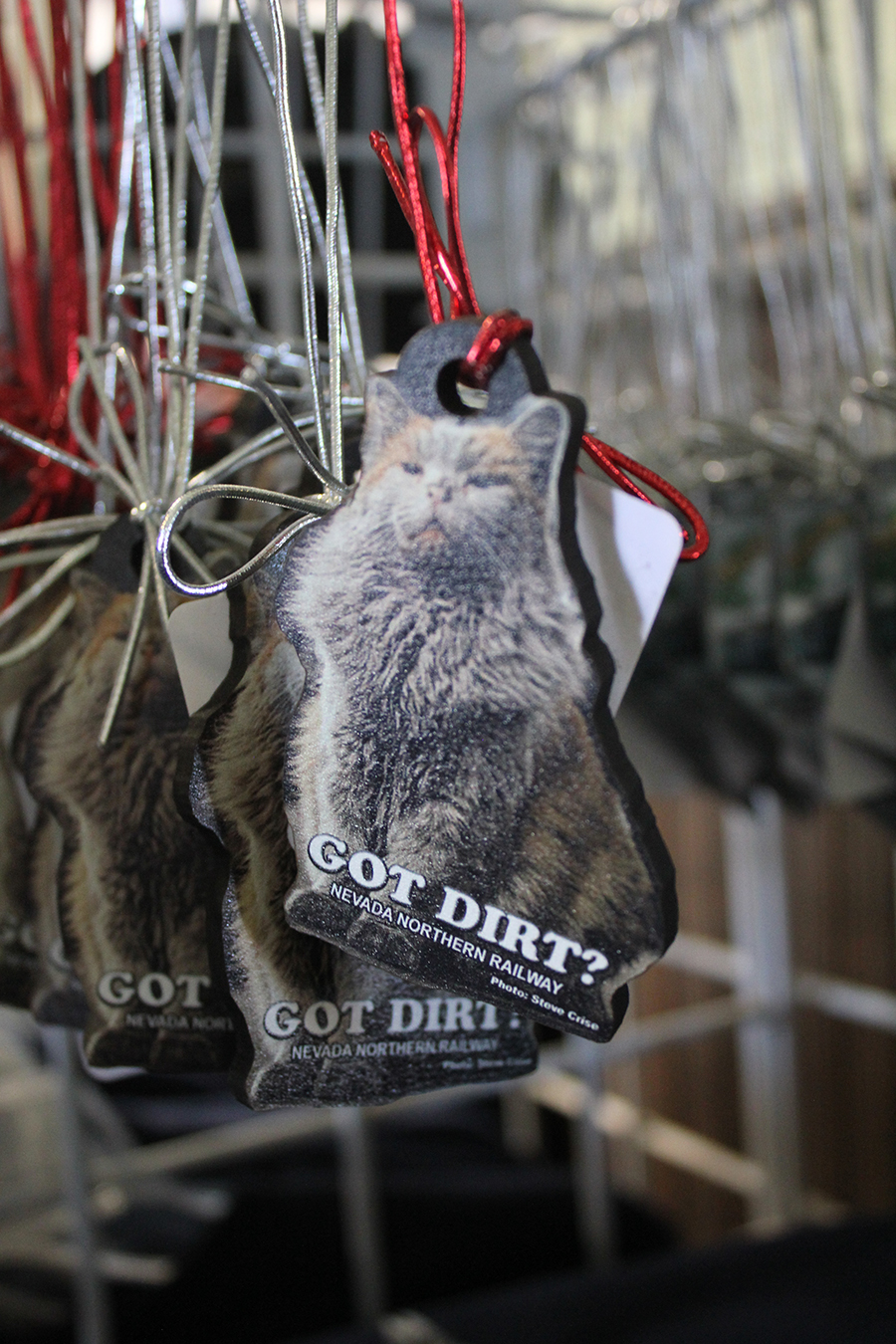 There’s also a great gift shop at the museum. They had dirty cat ornaments. I wish I’d taken a photo of the cat, but somehow failed to snag one. When we were in the engine house looking at the trains, a cat that was absolutely filthy wandered up to us and started rubbing on CC’s legs and purring. He pet it for a while then we went back to exploring. When we went to the gift shop and saw the ornaments, we mentioned meeting the cat. The gal working in the gift shop gave us a surprised look then smiled and explained that most people don’t see the cat because it usually hides from visitors. We felt pretty special to have received personalized attention from their resident star feline.

Sometimes when CC and I are on an adventure, the idea for a story comes to me out of the blue, which is what happened on this particular day. I’ve got something fun I’m planning for Christmas, so be sure to stay tuned and find out what our visit to the Nevada Northern Railway inspired!