Captain Cavedweller and I spent Friday and Saturday in Pendleton for the annual Pendleton Round-Up. It was canceled last year due to COVID, and the only other time, in the event’s 111 year history that the “show” hasn’t gone on was during World War II.

Friday morning kicks off with the Westward Ho Parade. An event that goes back to the early days of the rodeo. 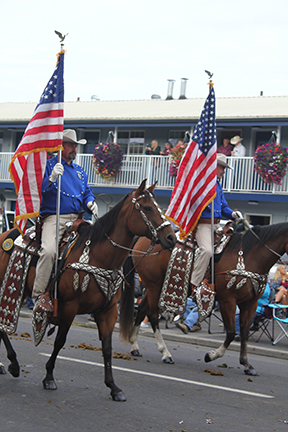 The flags set the tone for a patriotic feel for the parade.

We just happened to be at the very start of the parade route and that was awesome because we got to watch everyone go by when they were still fresh and excited. 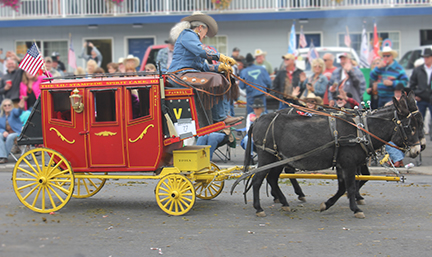 These little minis (stage included) were so cute! 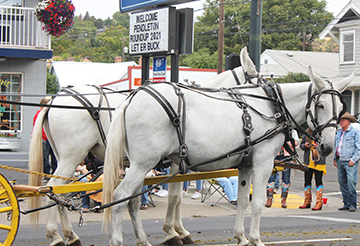 And this mule made me smile. They had to wait a moment to go and the mule kept looking at me and posing, like he knew I was taking his photograph. Couldn’t you see our beloved Steve the Mule doing the same thing? 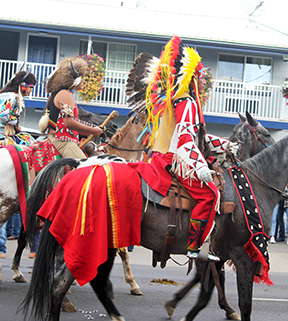 Tribes from all over the Northwest attend the Round-Up, as they have for the past 100-plus years. I love seeing their colorful regalia in the parade. 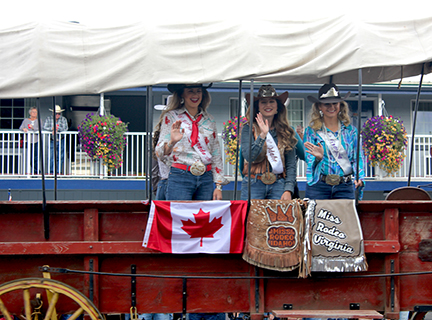 There were also visiting rodeo royalty from all over, including Alaska, Virginia, and even Canada!

These guys come to the parade each year and I love seeing their oxen. They usually set up a booth in the park where people can climb into the saddle and get a picture taken.

After the parade, we meandered to the rodeo grounds, stopping to check out the various vendor booths set up along the way.

The rodeo begins with a bang (literally) and among those who ride into the arena are the Pendleton Round-Up rodeo court.

The girls race into the arena, jump a fence, wave to the crowd, ride across the arena, and jump the fence on the other side. 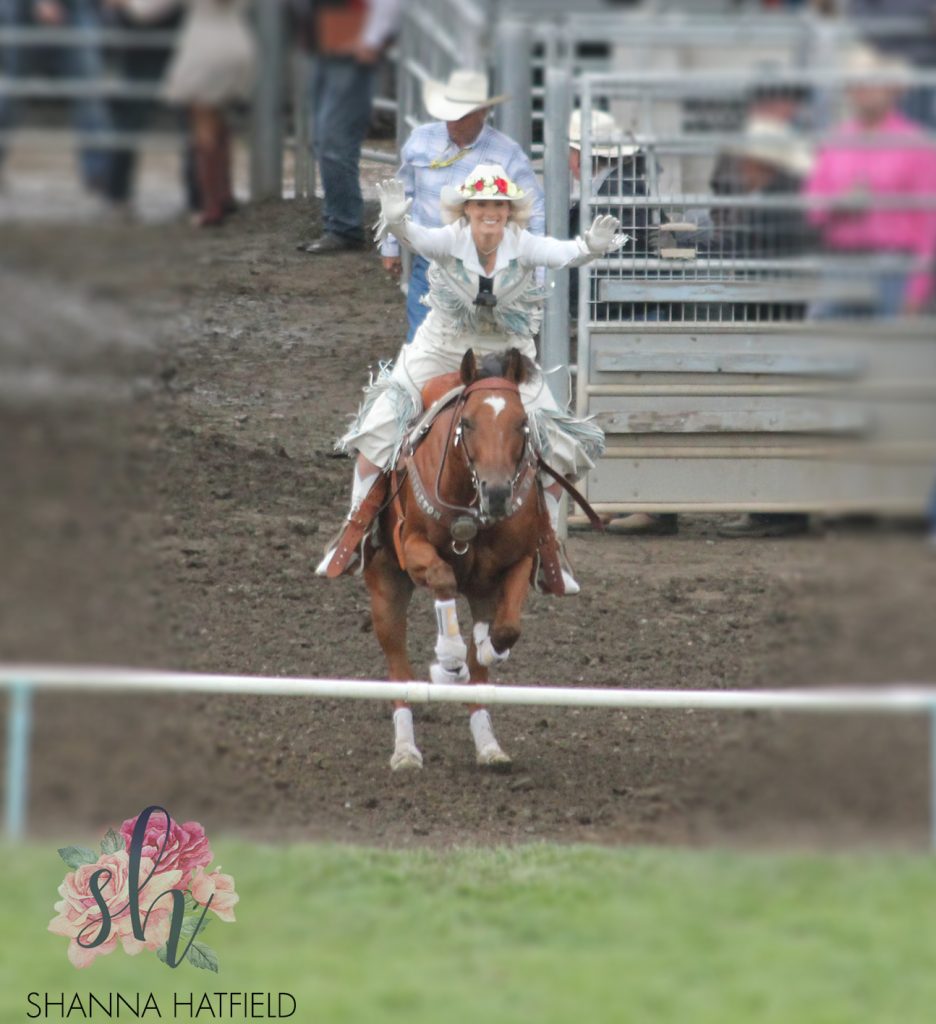 The queen entered riding hands-free, and jumped the fence that way. Very impressive!

And the girls had such neat outfits this year.

I tried to snap photos of each event, but realized after I got home I didn’t have any of barrel racers to share. 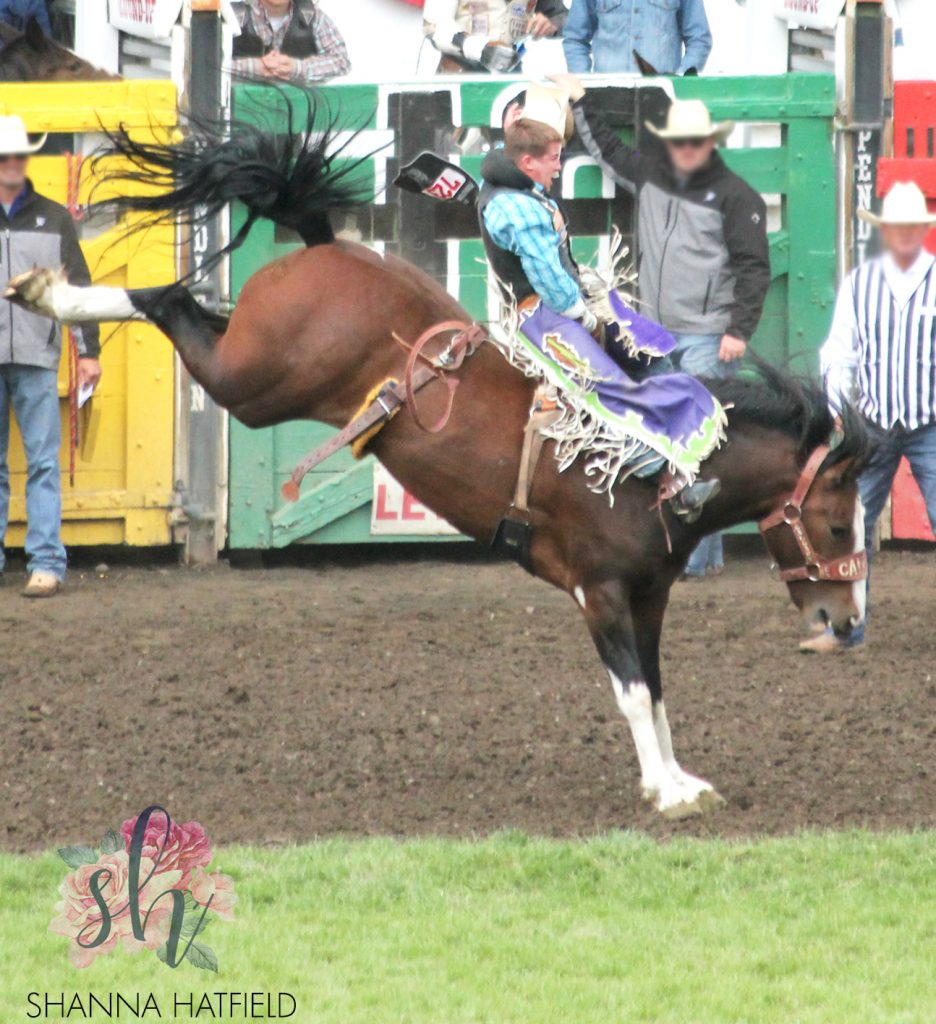 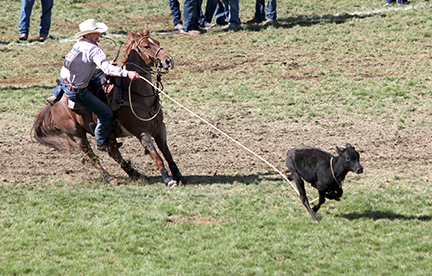 This is tie-down roping. The cowboy has to rope the calf, jump off his horse, race to the calf, turn it on its side, tie three legs together, and hope he didn’t break the barrier (or himself) in the process. The hero in Roping Christmas is a tie-down roper. 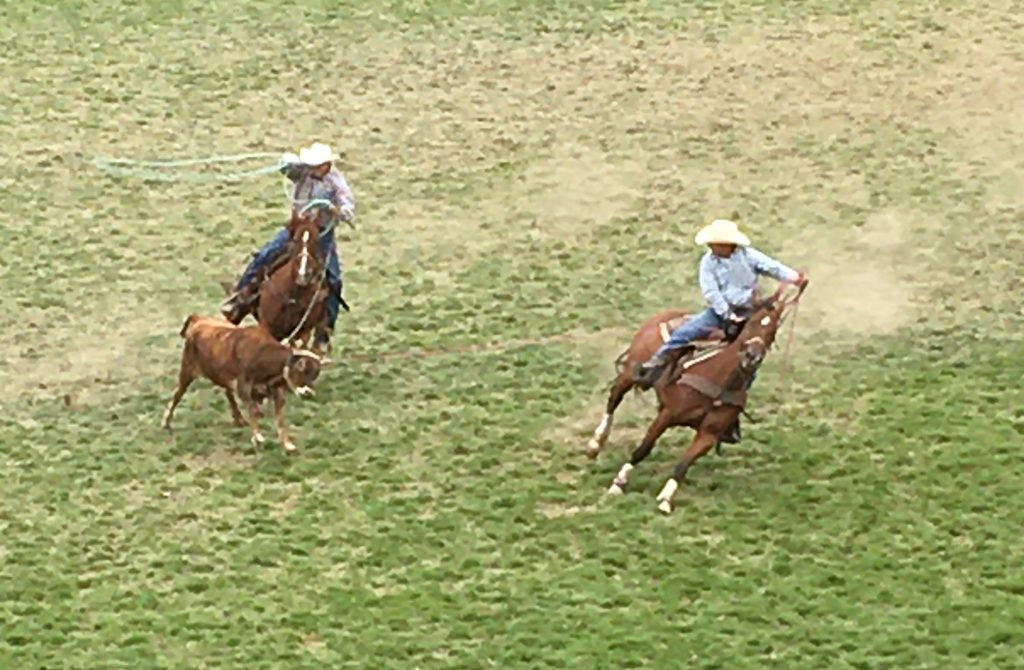 This is team roping (which I haven’t written about yet!) is the one “team” event in professional rodeo.  The header ropes first and must rope the steer around both horns, around one horn and the head, or around the neck. Any other catch  is considered illegal and the team is disqualified. After the header makes his catch, he turns the steer to the left and exposes the steer’s hind legs to the heeler. The heeler then attempts to rope both hind legs. If he catches only one foot, the team is assessed a five-second penalty. 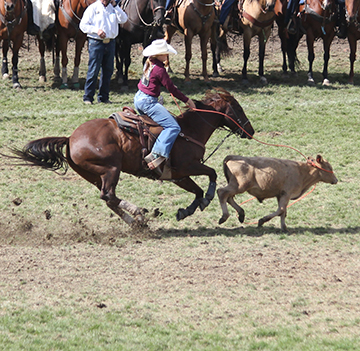 This is breakaway roping and features a calf and a mounted cowgirl.  Calves are given a head start, and if the cowgirl’s horse leaves the box too soon, a barrier breaks and a 10-second penalty is added to the roper’s time. The goal is to throw a loop as quickly as possible, because in all timed events fractions of a second will make the difference between winning and losing. 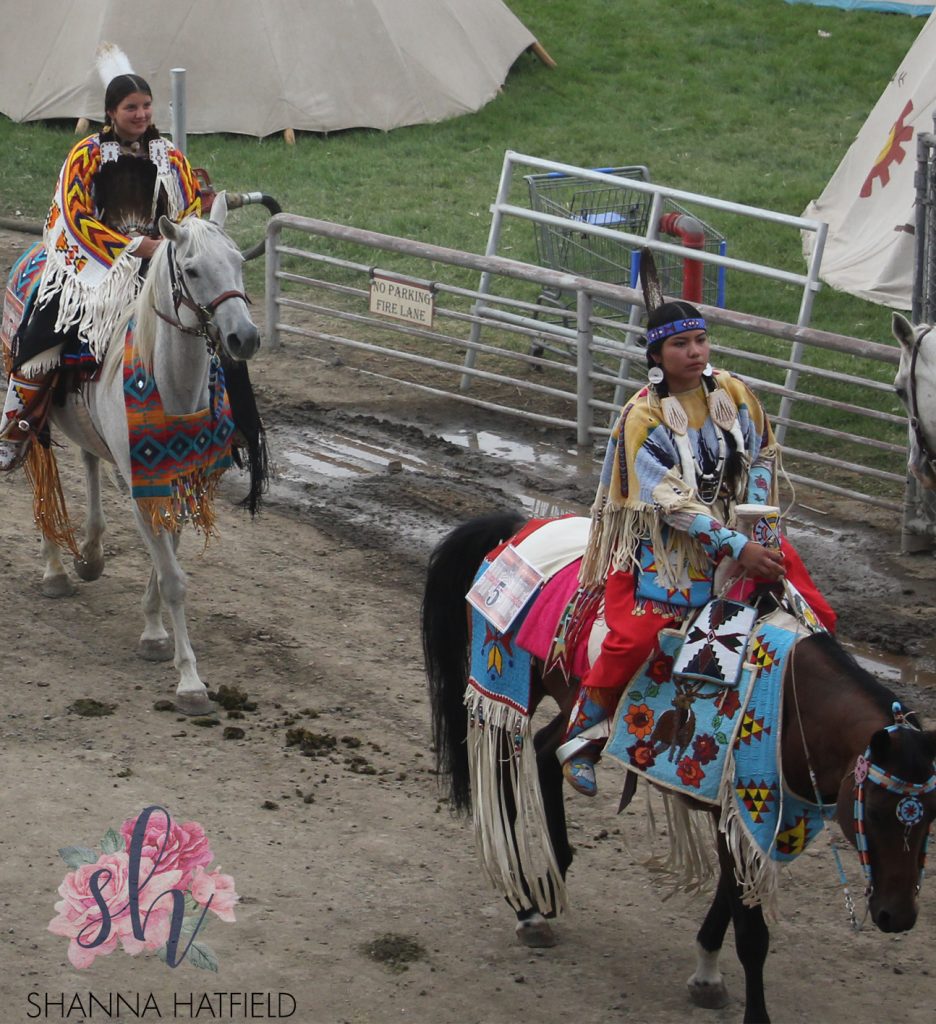 The Pendleton Round-Up is unique in that they have several Indian events including Indian dancing each day and also riders in full regalia who ride around the arena. I thought these two had such colorful costumes.

This is the Indian relay race. There is also a Chief’s Race and a race that is solely for women. These events are generally very fast-paced and exciting. 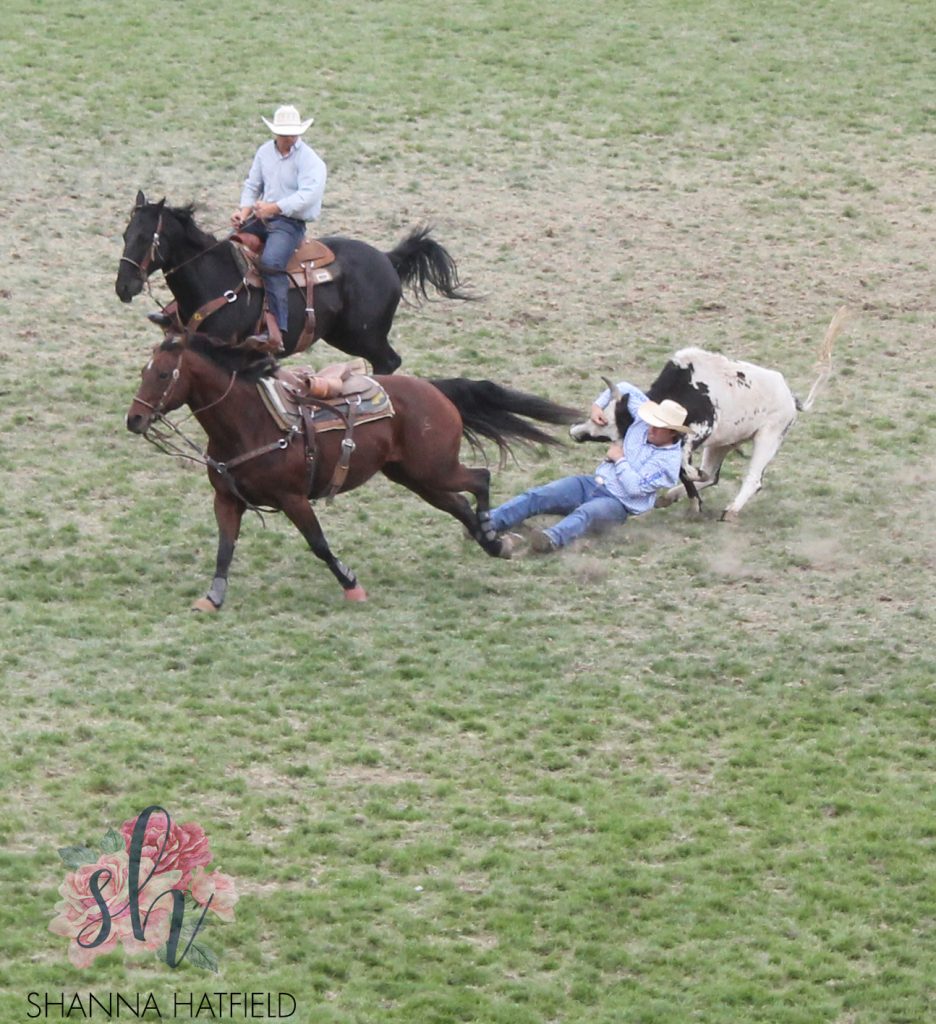 Steer wrestling, also known as bulldogging, is all about speed and strength. The world record is 2.4 seconds, so it is the fastest-paced event in rodeo. The objective of the steer wrestler is to use strength and technique to wrestle a steer to the ground as quickly as possible. The steer generally weighs more than twice as much as the cowboy and, at the time the two come together, they’re both often traveling at 30 miles per hour. Speed and precision, the two most important details in steer wrestling, make it a challenging event. As with tie-down and team ropers, the bulldogger starts on horseback in a box. A breakaway rope barrier is attached to the steer and stretched across the open end of the box. The steer gets a head start that is determined by the size of the arena. When the steer reaches the advantage point, the barrier is released and the bulldogger takes off in pursuit. If the bulldogger breaks the barrier before the steer reaches his head start, a 10-second penalty is assessed. When the cowboy reaches the steer, he slides down and off the right side of his galloping horse, hooks his right arm around the steer’s right horn, grasps the left horn with his left hand and, using strength and leverage, slows the animal and wrestles it to the ground. The steer has to be on the ground, all four legs pointing in the same direction before the steer wrestler can release him. Read more about a steer wrestler in Wrestling Christmas.

The spot we were sitting in Friday was right next to the chutes where we could look down and see what was going on beneath the stands, like when they moved these horses. It made me think of Celia getting rescued by Kash in Capturing Christmas.

I’ve been asked many times what is my favorite rodeo event. I finally decided it’s saddle bronc riding. Maybe because The Christmas Cowboy was the first rodeo book I wrote and Tate Morgan is a saddle bronc rider. Or it might just be the graceful poetry to the way some of these cowboys ride. I loved the reactions on the faces of the guys in the background watching the ride.

I wanted to share a little about the pickup men who work at a rodeo. They have to possess quick reflexes, the ability to think on their “feet,” and they can’t mind being crawled all over as cowboys try to get off a bucking beast. Here are three photos taken one right after another showing the pickup men at work. If possible, two of them usually get one on either side of the bucking horse. The cowboy will generally grab onto the pickup man’s arm, shoulder, whatever he can get ahold of, and pull himself off the bucking horse and land on the ground, generally on the other side of the pickup man. While all that is going on, the pickup men will grab the halter, loosen the flank (bucking) strap, and also be watching to try to keep anyone out of harm’s way. You can read more about the life of a pickup man (and a barrel racer’s life!) in Racing Christmas. 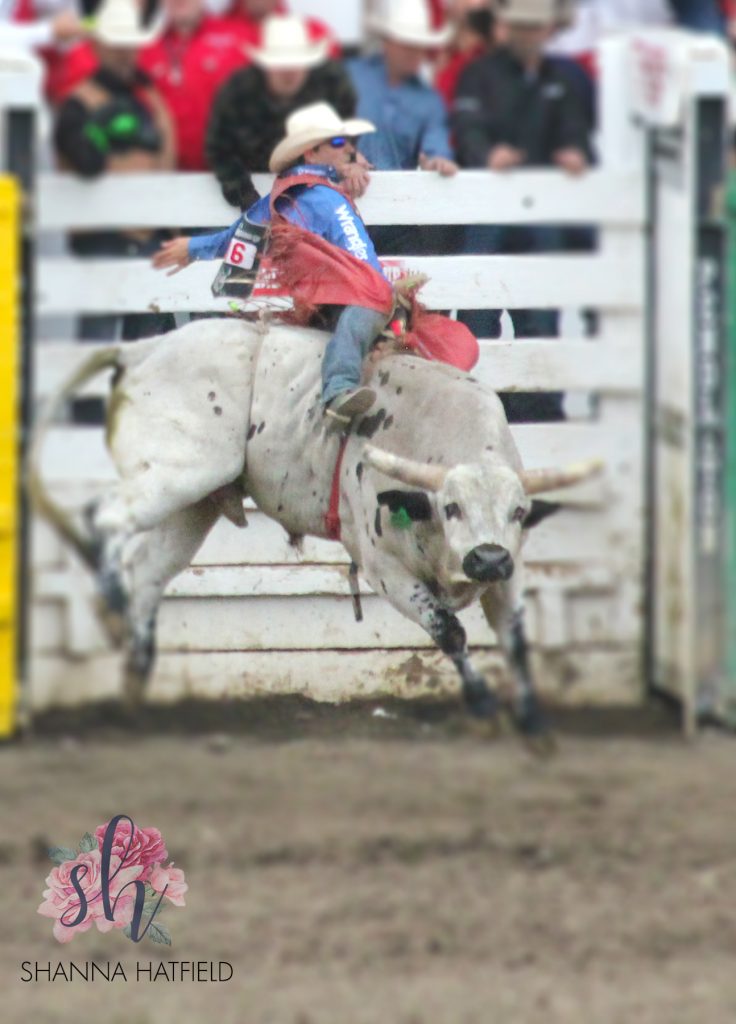 No one can deny bull riding is an exciting, exhilarating, sometimes terrifying event. But it sure is incredible to watch. As with the other roughstock events, the rider must stay on the back of a 2,000 pound bull for a full eight seconds. Bull riding isn’t for the faint of heart. It requires courage, physical prowess, and mental toughness. The rider (like with the other roughstock events) can only use one hand to stay aboard during the ride. Unlike the other events, bull riders are not required to mark out their animals. Spurring can add points to a score, but usually cowboys are judged on their ability to stay on the bull, because it isn’t an easy task. The cowboy grasps a flat, braided wrap which is wrapped around the bull’s chest just behind the front legs and over its withers. One end of the bull rope, called the tail, is threaded through a loop on the other end and tightened around the bull. The rider then wraps the tail around his hand, sometimes weaving it through his fingers to further secure his grip.

Although this rider didn’t make it the full eight seconds, I loved this photo.  If you want to know more about bull riding, check out Chasing Christmas.

Bull riders wouldn’t be able to do what they do without the help of the rodeo barrelman and bullfighters. You can read all about Cooper James, my favorite rodeo barrelman in Barreling Through Christmas.

I thought it might be fun to show the bullfighters in action. In the third photo you can see the bull’s feet have slid out from under him. The were many slides and accidents because it rained in the morning and the arena was slick (especially the grass). 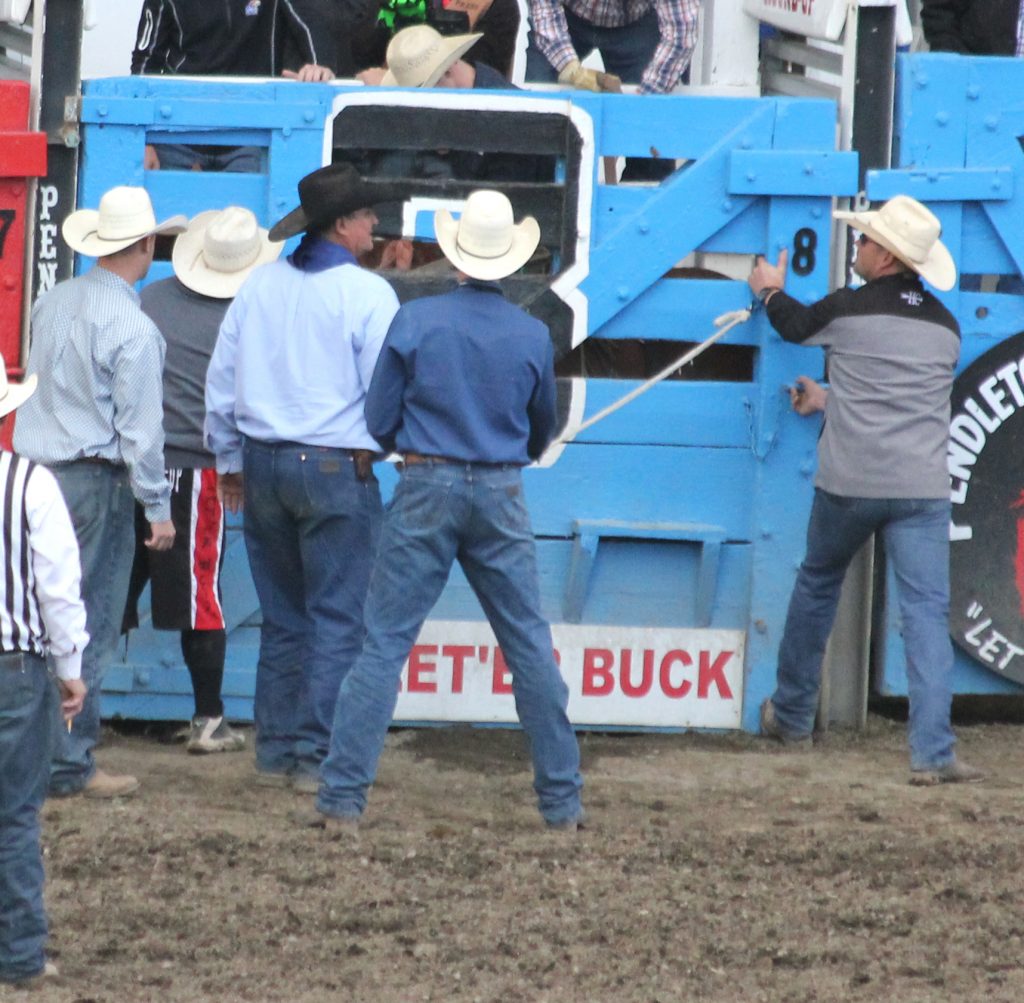 One more photo I had to share. These guys pull the gates when the cowboys inside are ready to ride into the arena on horses or bulls. Keep the gate puller in mind because there will be more about one particular cowboy who volunteers for this job in my upcoming Rodeo Romance release (which I’m not quite ready to share details yet, so stay tuned!)

I will tell you the title: Remembering Christmas!