My oldest brother’s favorite pie is rhubarb. Usually, for his birthday, my mom would bake him a pie instead of a cake.

This year, with Mom gone, and all of us feeling a little heartsore, I decided to bake one for him. (Shh, don’t tell him. It’s in the freezer until I can go visit him!)

I dug out an old notebook with handwritten recipes she’d given to me when I left for college. In there, I found her pie crust recipe as well as her recipe for rhubarb pie.

As I rolled out the dough, cut up the rhubarb, and assembled the pie, it almost felt like Mom was with me, adding an extra sprinkling of love to my efforts. 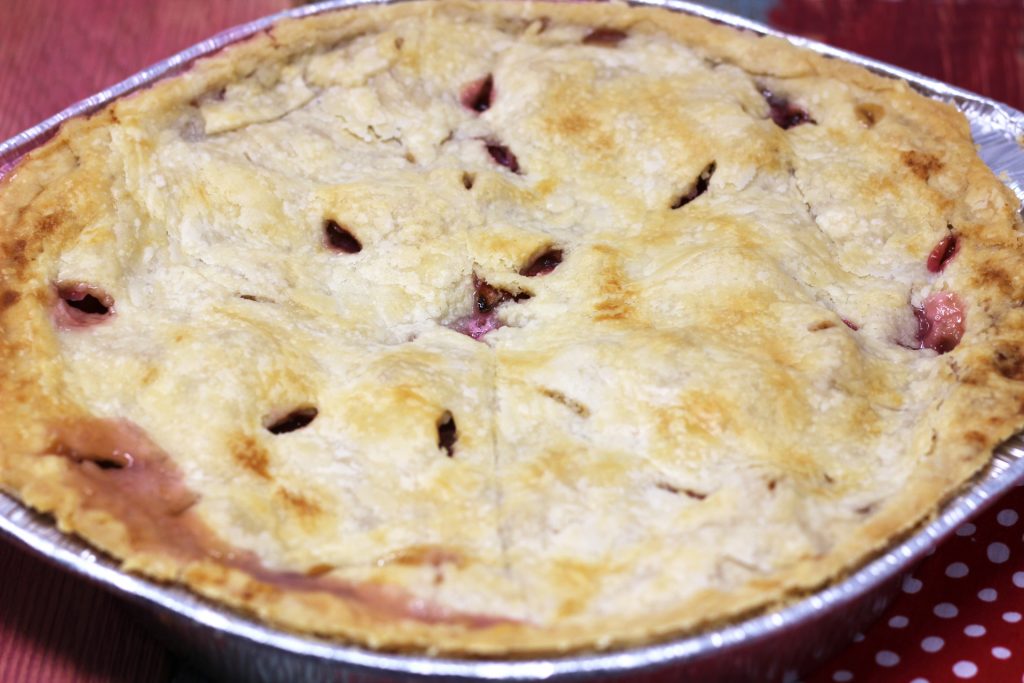 Rhubarb might not be my favorite pie to eat, but it was fun to bake. It has probably been 20 years since the last time I baked a rhubarb pie. (And if you are baking a pie to give away, I found some heavy duty large, deep foil pie tins with lids at the Dollar Store. It worked perfectly for this pie recipe!) 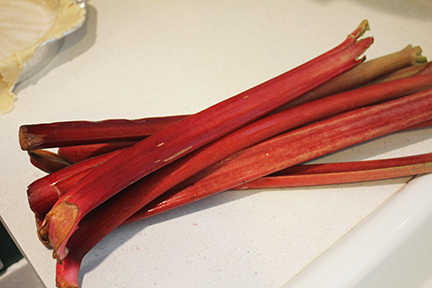 Start with fresh rhubarb. Wash it and trim the ends. 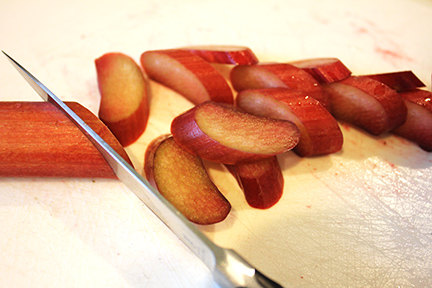 Then slice it into bite-sized pieces. I cut mine on an angle but you don’t have to.

Next, sugar the rhubarb. Rhubarb is tart by nature, so if you want a sweet pie, you gotta add the sugar. 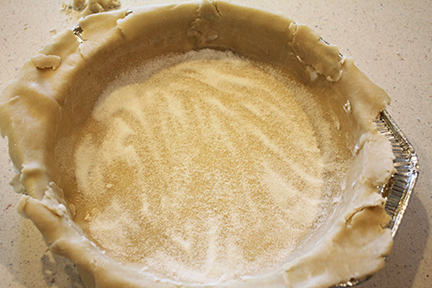 You’ll need two prepared pie crusts (Mom’s recipe below). In the bottom crust, sprinkle about a tablespoon of sugar. This helps the crust from getting too soggy as it bakes. 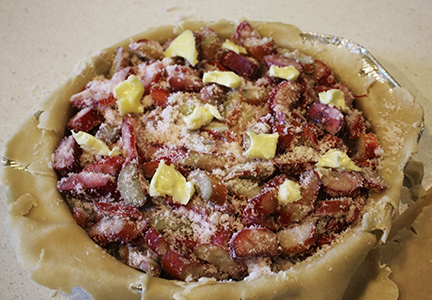 Add the rhubarb and then, because butter makes everything better, top it with little pieces of butter. 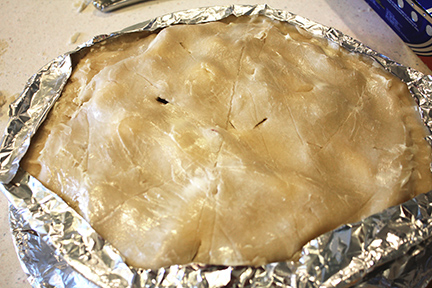 Cover with the second crust, crimp the edges, cut a few air holes, and, if you don’t want your crust overbaked, cover it with foil before placing in the oven. 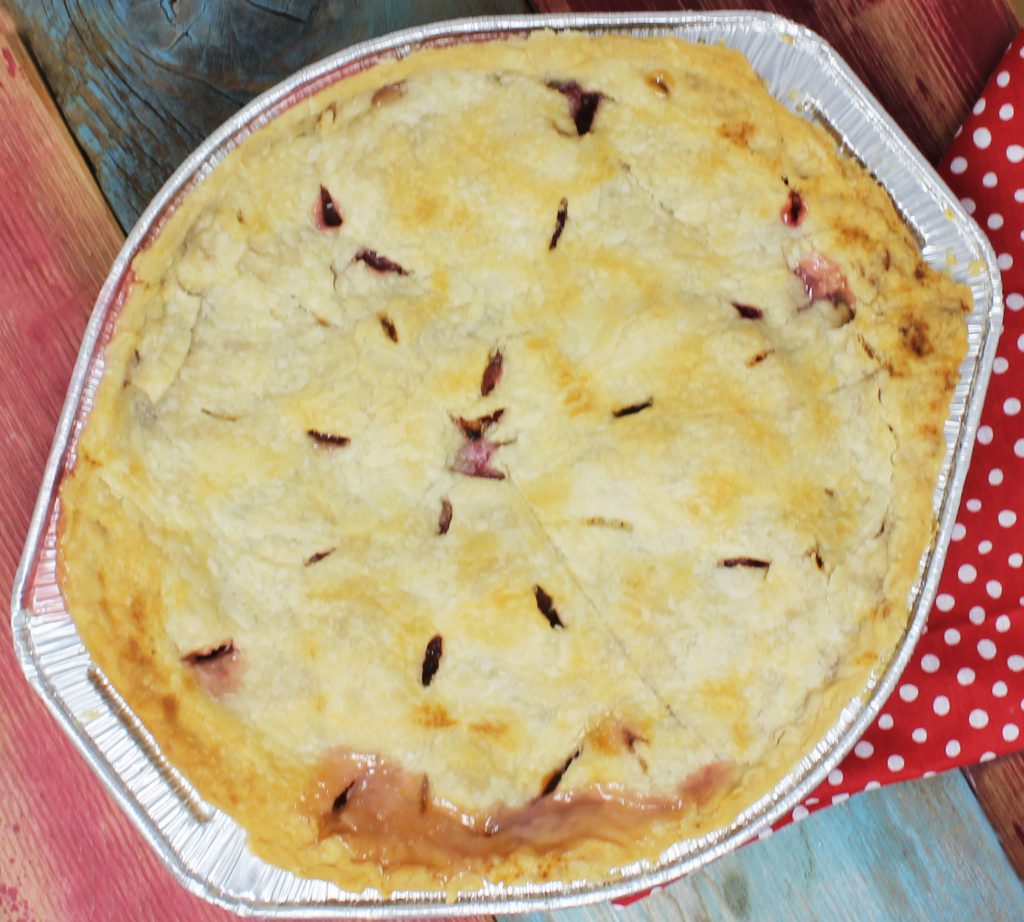 Bake and enjoy, or freeze for later, like I did.

2/3 cup plus 2 tablespoons of shortening

For pie crust, measure cold water into a cup and place in the freezer.  Combine flour, salt and shortening, cutting together with a pastry blender (or a fork will work, too). When crumbly add the ice water, one tablespoon at a time until dough sticks together. Divide dough in half, making one half slightly larger (for the bottom crust). Roll out each half between sheets of parchment paper or waxed paper. Place the bottom crust into the pie pan and sprinkle with sugar. Set aside.

Wash and trim the ends of the rhubarb, then cut into bite-sized pieces. In a mixing bowl combine rhubarb with sugar and flour. Let sit about five minutes or so, then spoon into the pie pan. Add butter to the top of the rhubarb mixture, just dropping little bits all around. Place second crust on top. Using your fingers or a fork, press the pie crust edges together to seal it, then trim off excess crust. If you desire, you can brush the top of the crust with melted butter to make it even more buttery, er… I mean better. Cut a few little slits into the top of the crust.

Fold pieces of foil over the edge of the crust to keep it from overcooking. Place in the oven and bake 15 minutes, then reduce heat to 375 and continue cooking for about forty minutes, or until juice bubbles up in the slits. You can remove the foil on the edges about 15 minutes before it is finished baking to make sure they are a nice golden brown.

Remove from oven and serve warm with ice cream.