Captain Cavedweller and I were recently in Seattle. While we were there, even though it was a very brief trip, we decided to take the famous Bill Speidel’s Underground Tour. We didn’t know much about it, other than a few people had said it was interesting and fun. Since we’ve enjoyed doing the Pendleton Underground Tours numerous times, we were excited to give this one a try.

The tour takes place in Pioneer Square, the birthplace of Seattle. From the moment we sat down to listen to a tour guide offer an intro about how the city began, we were thoroughly entertained. The tour guides were fun and funny, and in spite of some serious topics, kept the adventure light and engaging. 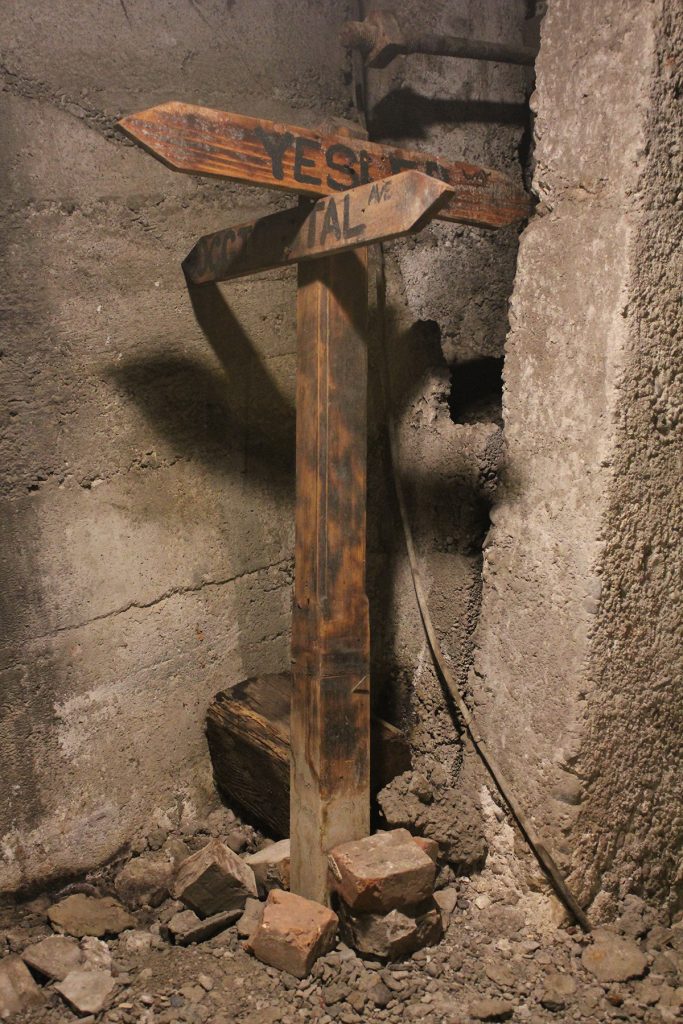 The tour lasted about 75 minutes, taking us on a stroll beneath the streets of a busy Seattle area. 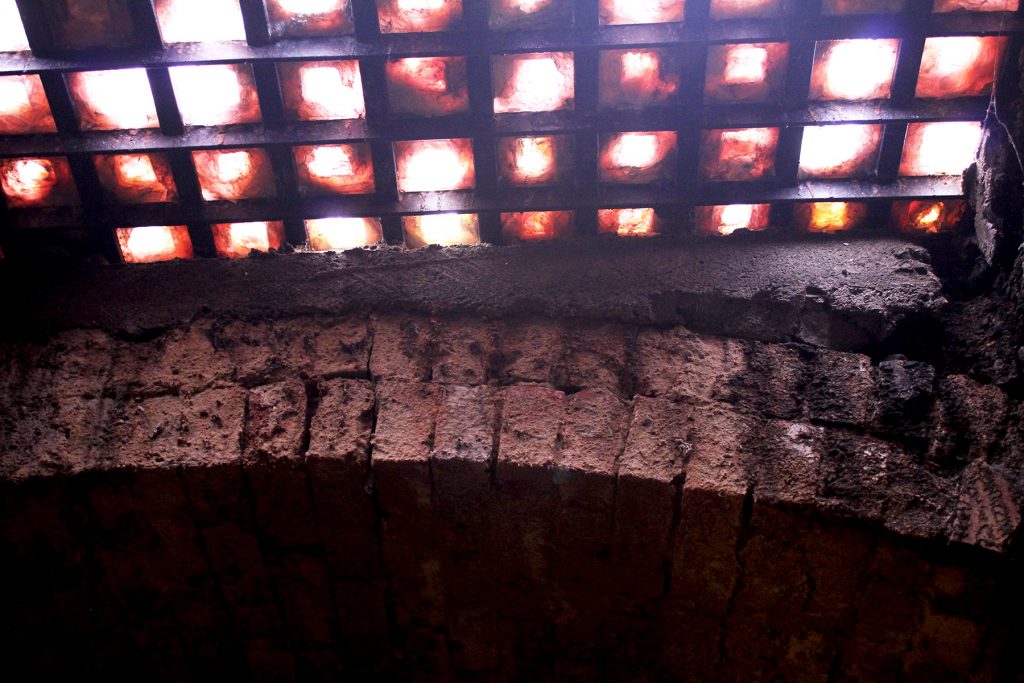 We walked beneath purple glass prisms that once allowed light to shine into the tunnels. 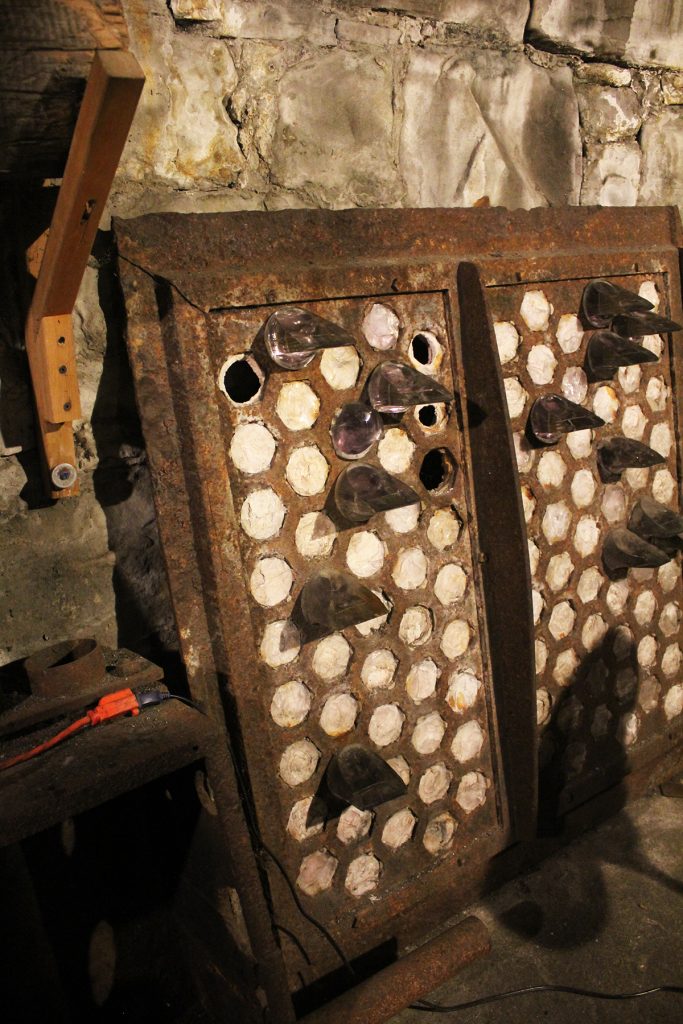 Sadly, age is causing them to fall apart and break. 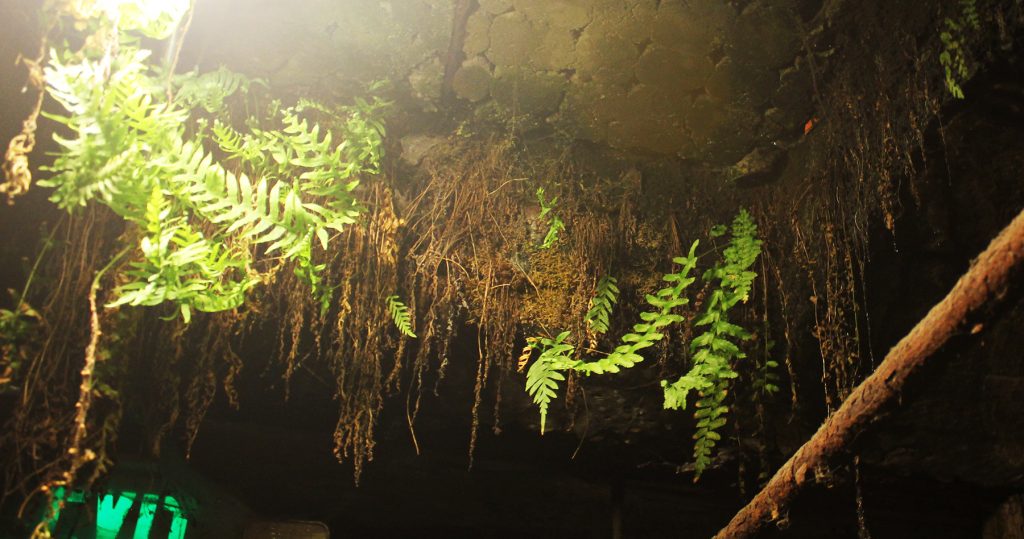 I was shocked to see ferns growing down there, but it is damp, even if they don’t get a lot of light. 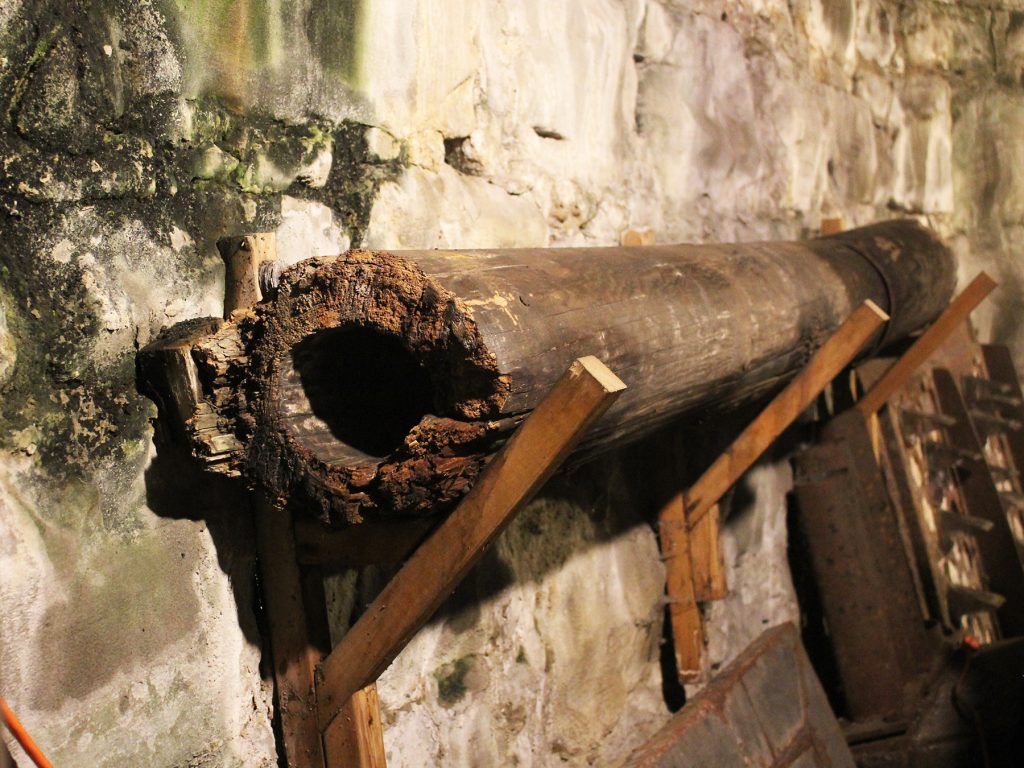 The tour brochure promises, “Dirt, Corruption, Sewers, Scandal!” Which is exactly what the tour guides discuss. They shared fascinating, humorous stories the pioneers would not want anyone to hear. One of the stories was about how a ship load of toilets were ordered and installed  by the pioneers. They used a wooden “pipe” to carry away the waste and when the tide was high, it would come back up the toilets. (EWWWW!). Above, is one of the “pipes”. 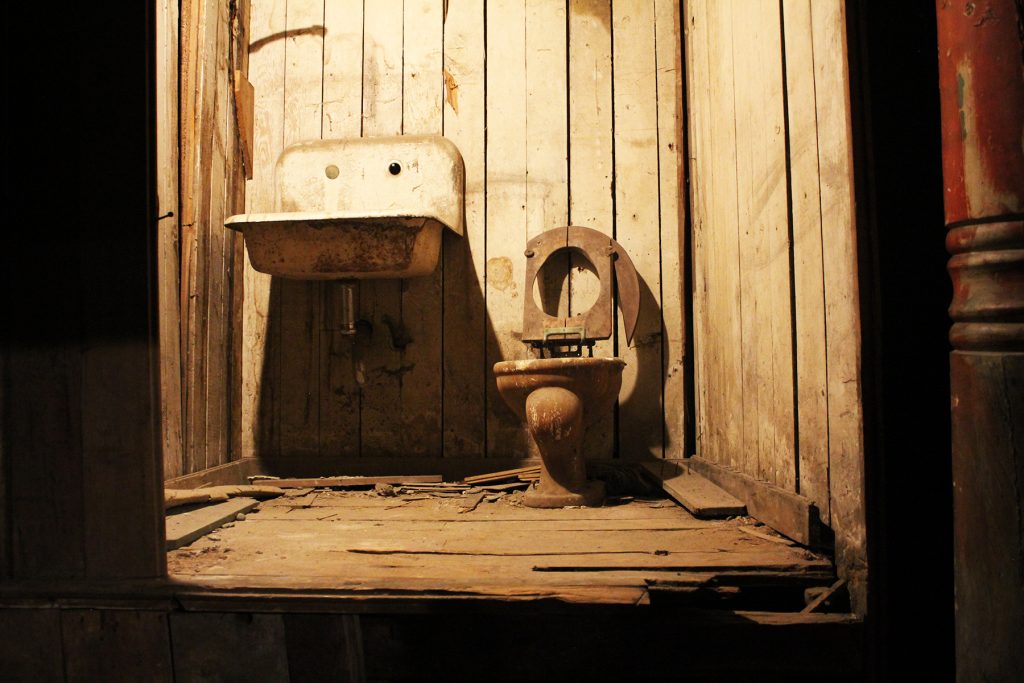 The toilets, made by Thomas Crapper (not kidding, that really is his name), were quite inventive at the time. 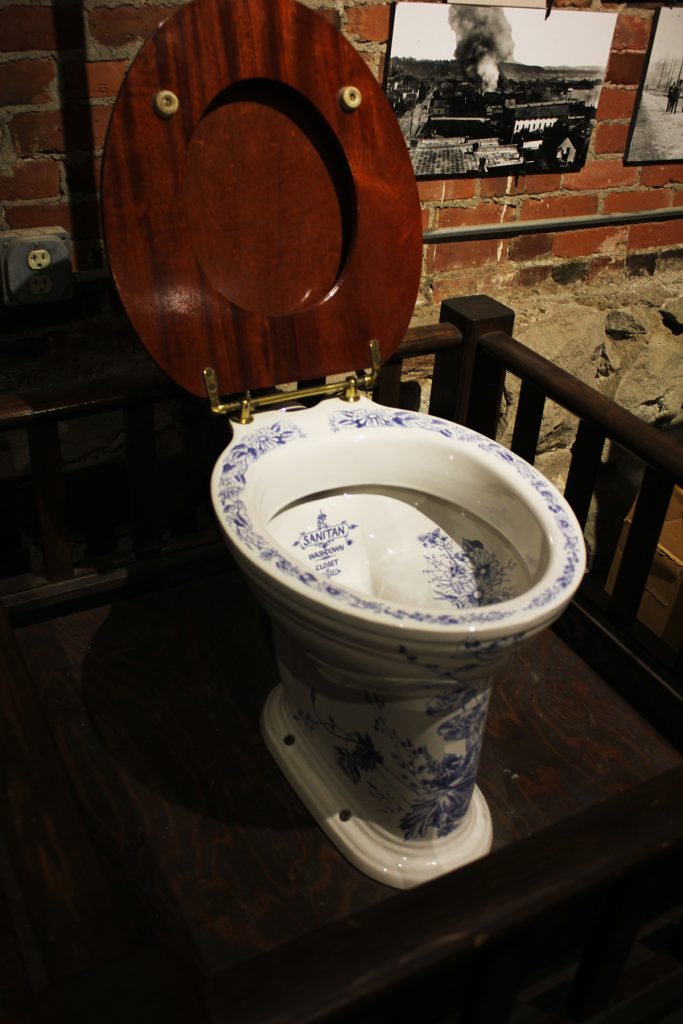 Not to mention quite attractive! 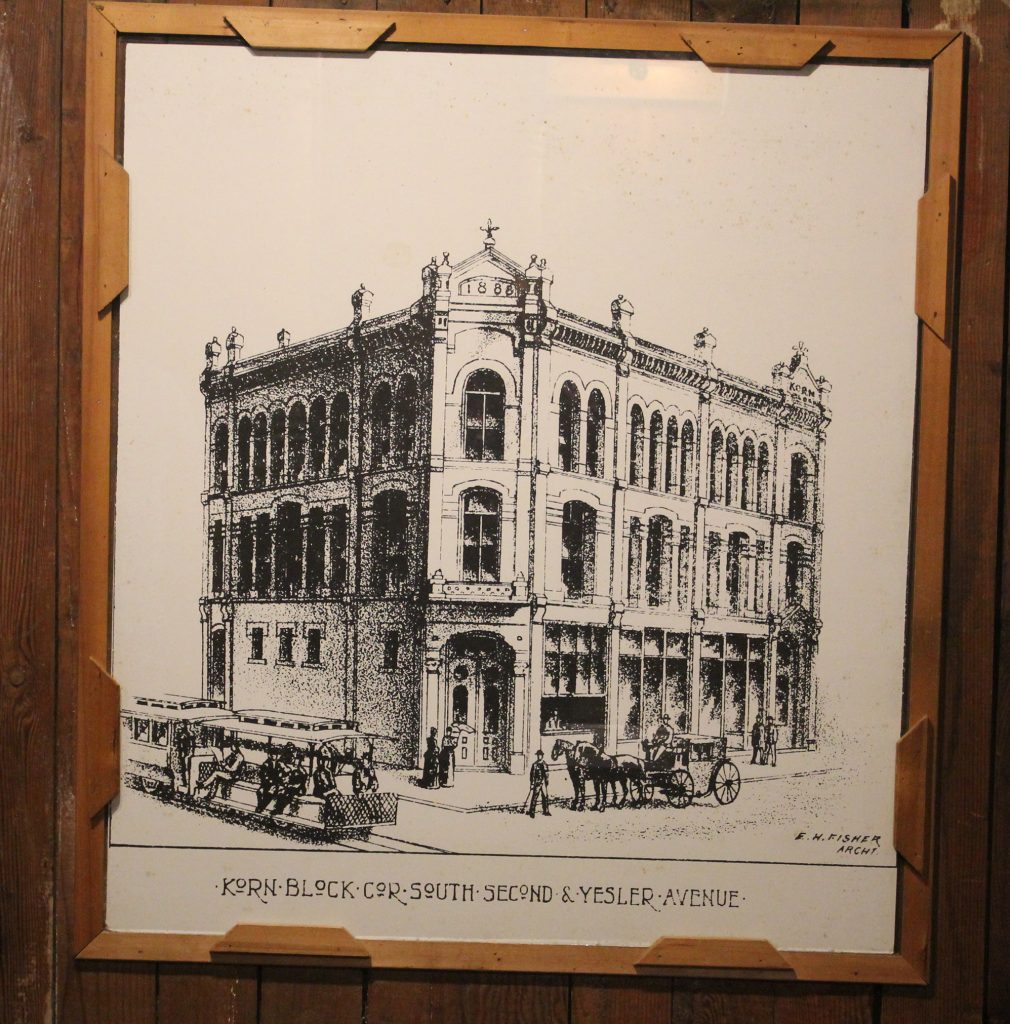 Originally, the pioneers who came to the area built the town on soggy tideflats. When it rained (which is often in Seattle), the streets would swell with enough mud it could consume dogs and small children. The pioneers decided dumping the sawdust into the mud from the timber they were logging nearby would fix the problem. Only, it didn’t. One tour guide referred to the ground as having a consistency of soggy oatmeal.

In 1889, a fire, accidentally started by a boy in a cabinet shop, destroyed more than 25 square blocks of the town. A decision to require all new construction be of stone or brick was quickly passed. Rather than start anew, the city built retaining walls, eight feet or higher, on either side of the old streets, filled in the space between the walls, and paved over the fill to raise the streets, making them approximately one story higher than the old sidewalks that still ran alongside them, creating the underground area.  Business owners quickly rebuilt on the old, muddy ground where they’d been before, unmindful to the fact their display windows and front doors were now basically basements. The drawing above shows a building prior to the fire. 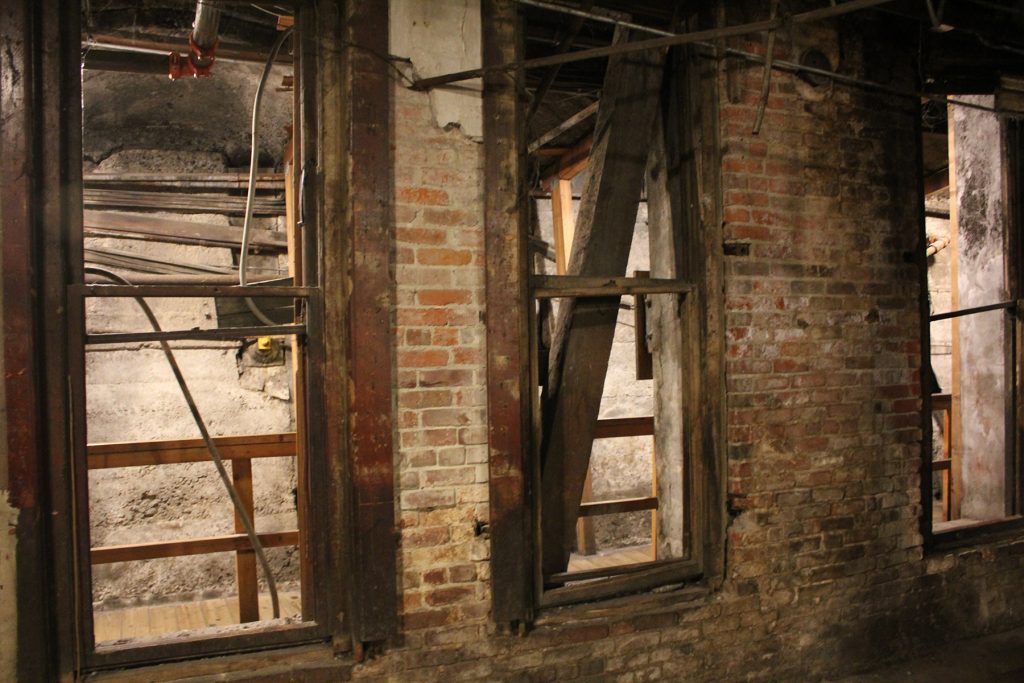 These windows are looking out what would have been the windows on the right side of the drawing after it was “buried” in the underground.

For years, ladders were used to get people from the underground level to the street level. Sometimes they height difference was as high as 35 feet and ladders were tied together to make the climb. 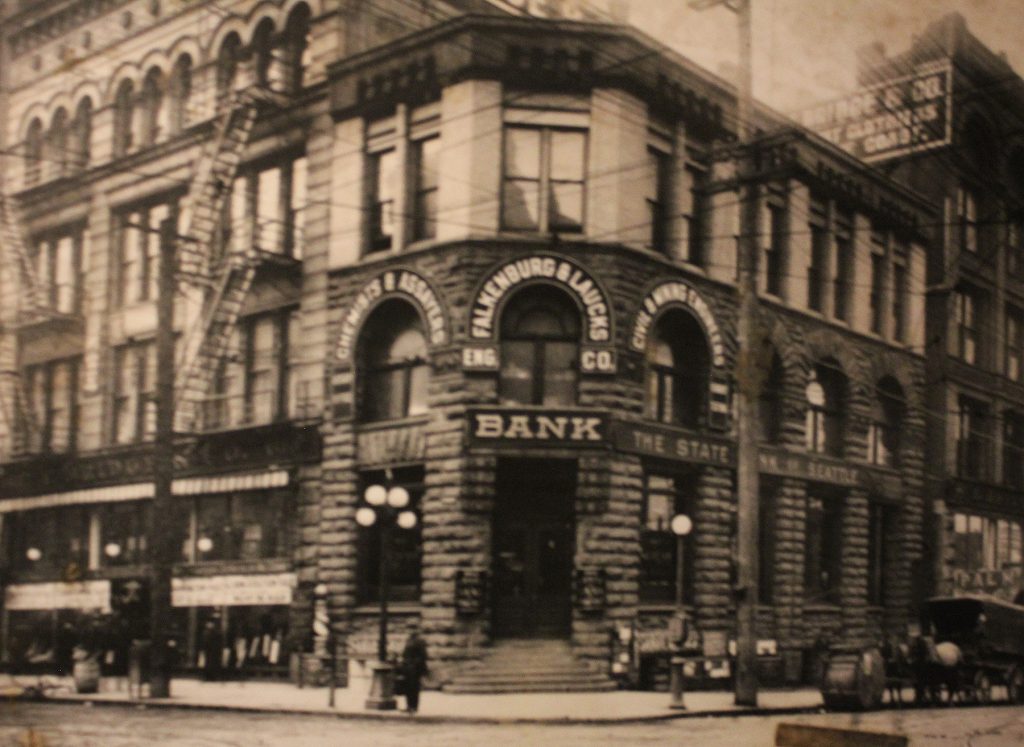 This is a street view of the bank back in the day. 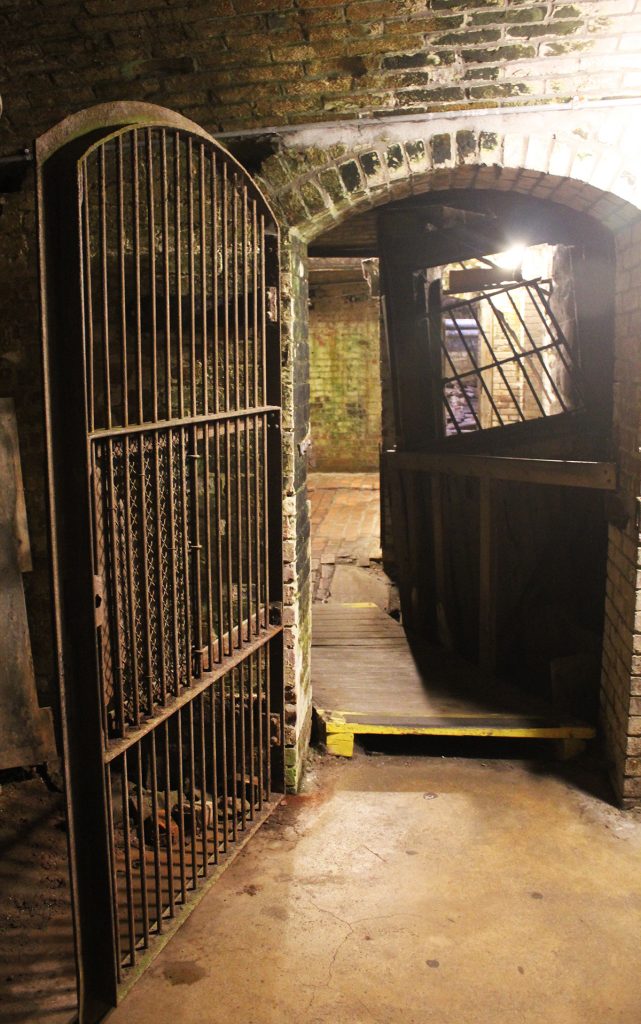 And this is looking back at it inside the tunnels. Our tour guide said a teller was fatally shot in the teller cage here and his ghost haunts the tunnels. That’s right, the underground tunnels are reportedly haunted! 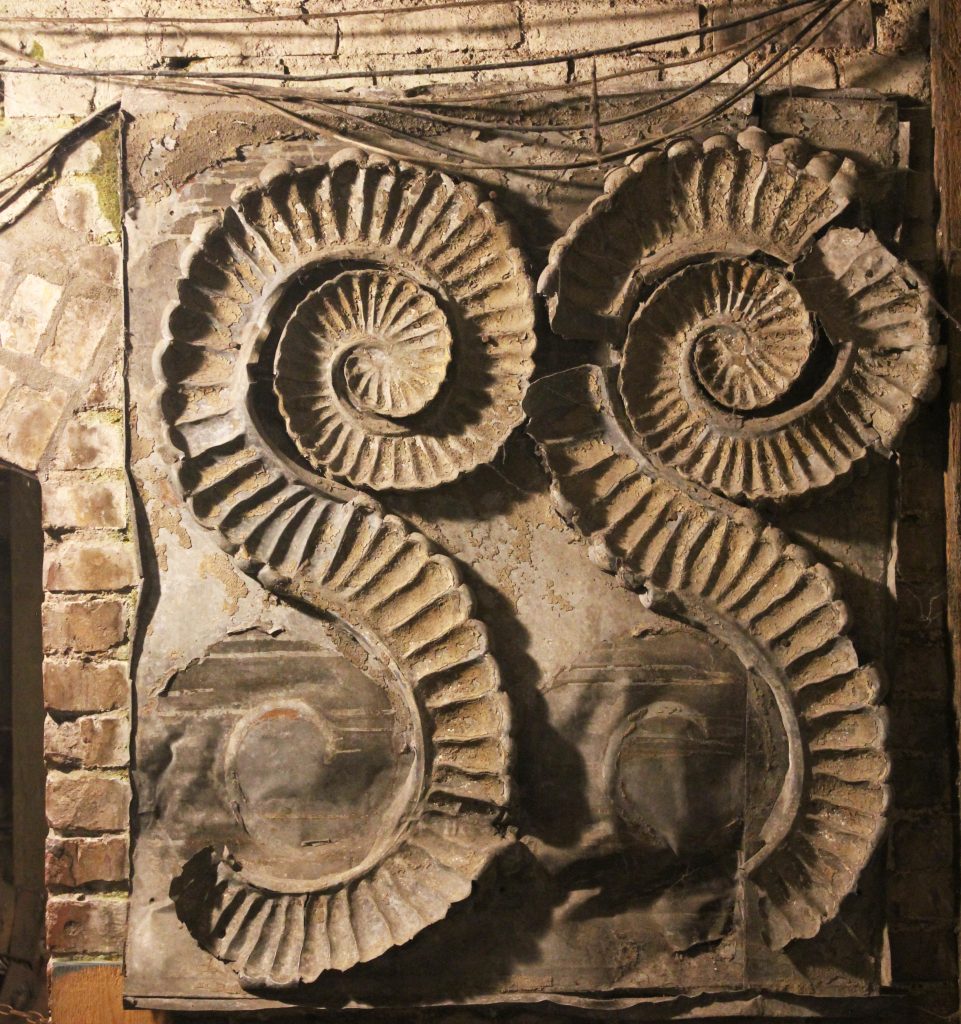 The Yukon Gold Rush brought more than 100,000 adventurers through Seattle on their way to Alaska in 1897. The financial boom brought any number of entrepreneurs to Pioneer Square including barmen, gamblers, and madams. When the gold rush ended, the questionable characters stayed and the area developed a bad reputation. Upstanding businesses moved uptown and the area became all but forgotten for decades.

When the city began tearing down historic structures in the area, Bill Speidel decided to do something about it.  In May of 1965, a “Know Your Seattle Day” was held. Bill and his wife Shirley were persuaded to give tours of the underground at a dollar per person. They took 500 people through the tunnels that day and soon began scheduling public tours. After presenting the mayor with a petition with 100,000 names on it, the city council adopted an ordinance naming 20 square blocks in Pioneer Square a historic district. Later, the area was listed on the national register of historic places. 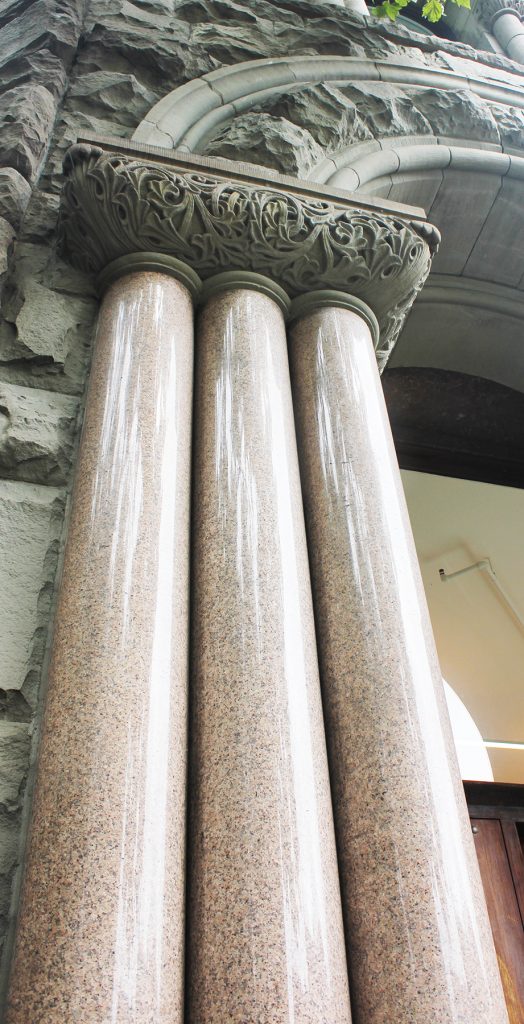 If you find yourself near Pioneer Square, take the time to go on this tour. Not only will it make you laugh, you’ll learn a good bit about Seattle’s history, too!