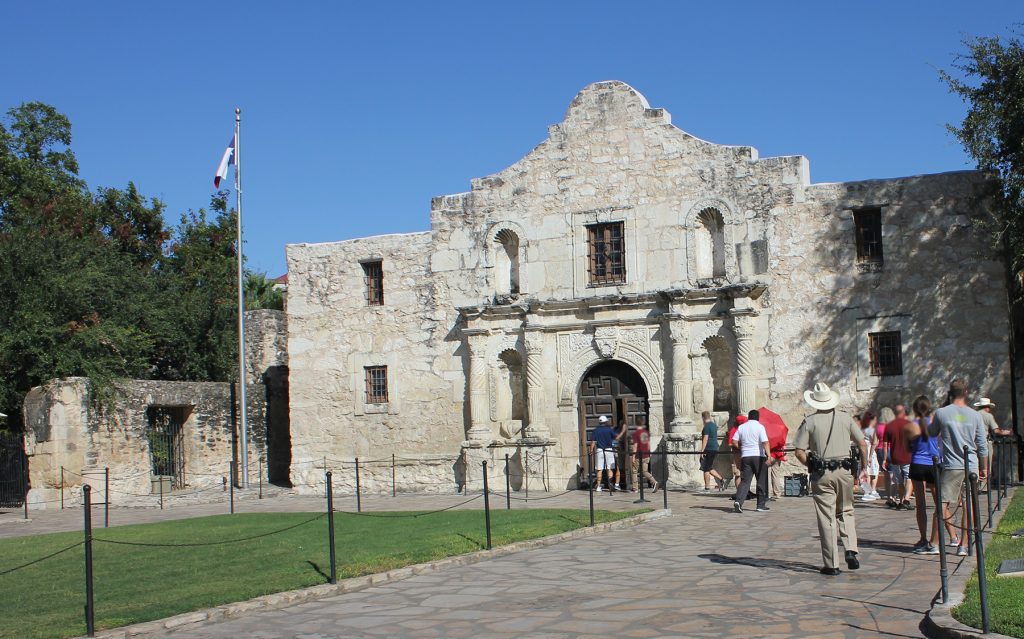 Captain Cavedweller and I recently had the opportunity to spend some time in San Antonio, Texas. It was such a fun trip even though I was there for work to attend the 25th annual Women Writing the West Conference.

We went a few days before the conference just so we could take in some of the wonderful historical sites and museums.

Within an hour of arriving, we were standing in front of The Alamo, perhaps one of the most well-known historic events in American history. I won’t go into the details of the battle, but if you aren’t familiar with it, brush up on that time in history. 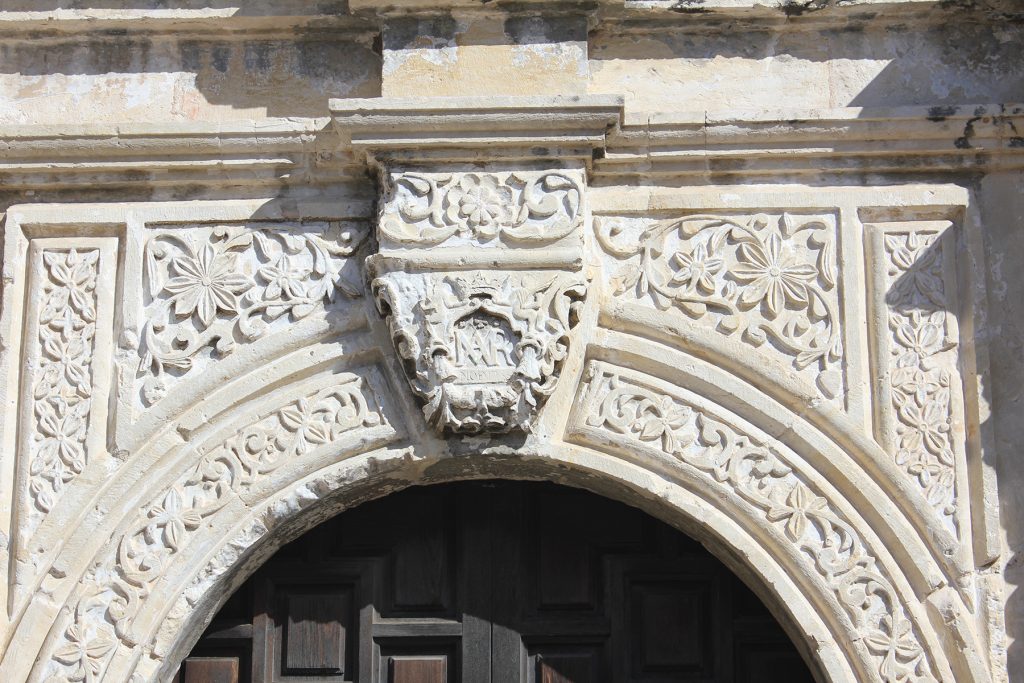 This photo shows some of the rich architectural detail of the church where the battle was fought. Originally a Spanish mission era church (1755-1793), the building is the most recognizable structure on the Alamo grounds. Today, there are still some traces of the epic 1836 battle evident in the building, as well as the changes that were made when it served as a U.S. Army Quartermaster Depot warehouse in the late 1800s then eventually became a memorial to Alamo defenders. 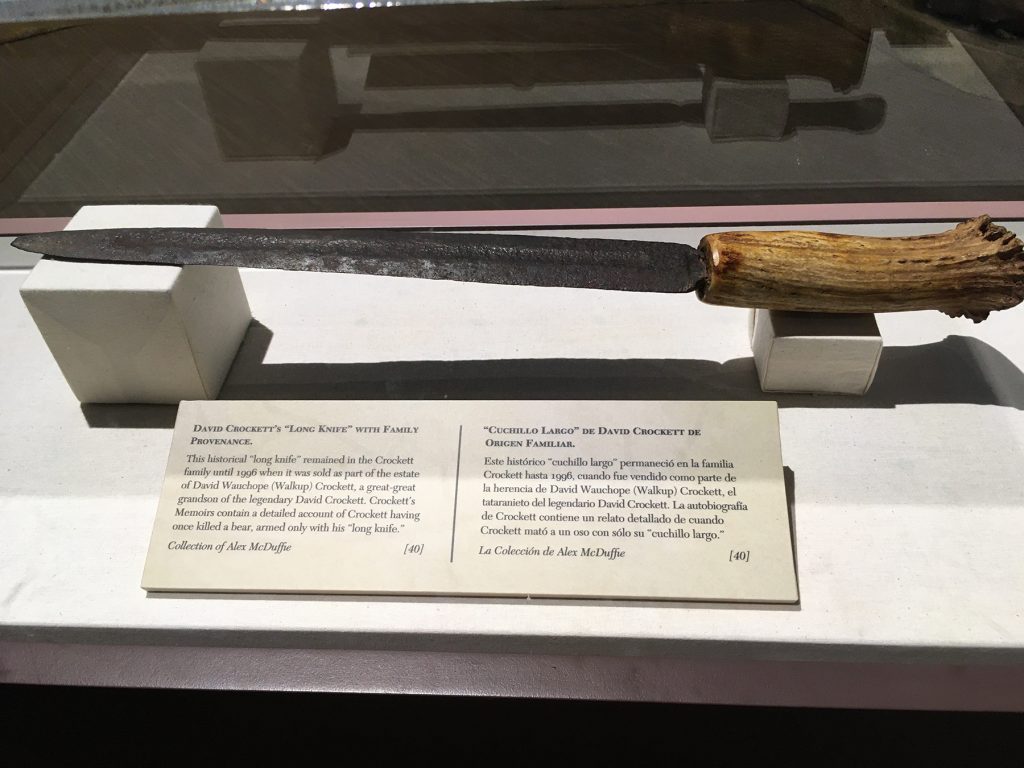 Through the conference, we were able to go on a guided tour of the Alamo. The tour guide led us through parts of the church not open to the public as well as shared informational details not readily available when wandering through the buildings on your own. Our wanderings at various museums allowed us the opportunity to see Davy Crockett’s long knife on display.

We also got to see this field desk Sam Houston used. 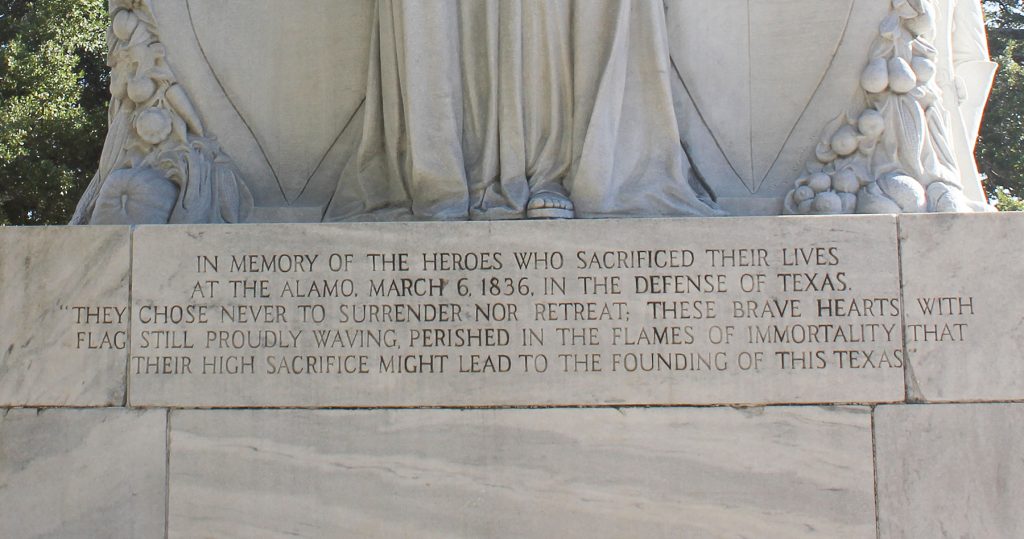 In front of The Alamo is a beautiful, impressive statue, dedicated to the heroes who gave their lives in that memorable battle. 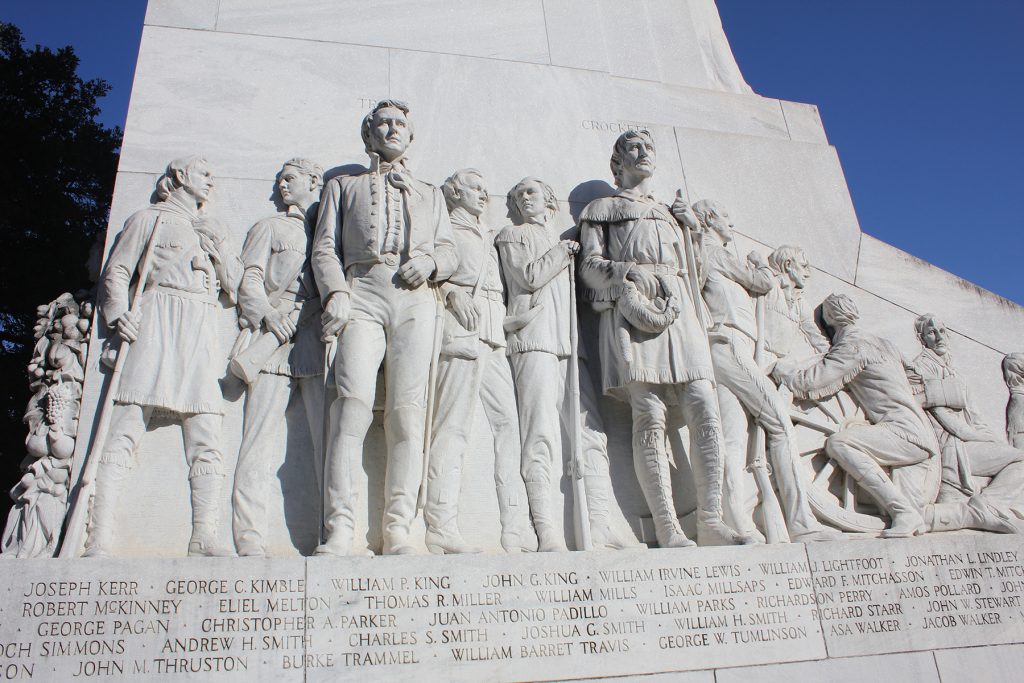 Their names and likeness are captured for all visitors to see. 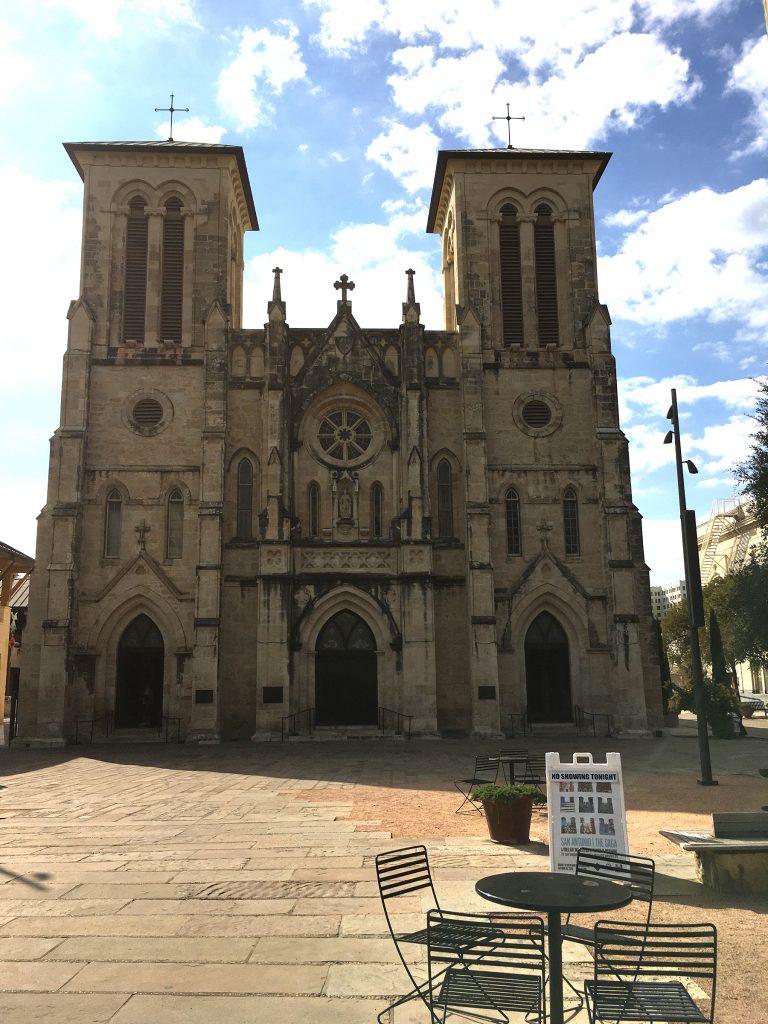 And a few blocks away is the San Fernando Cathedral. The church was founded on March 9, 1731 by a group of families who came from the Canary Islands at the invitation of King Phillip V of Spain. The church was constructed with plans to be the center of the life of this city and is the oldest standing church building in Texas. James Bowie married Ursula de Veramendi at the San Fernando Cathedral in 1831. During the Seige of Bexar, General Santa Ana used the church as a lookout and flew a red flag to signal “no mercy” to the Texans. 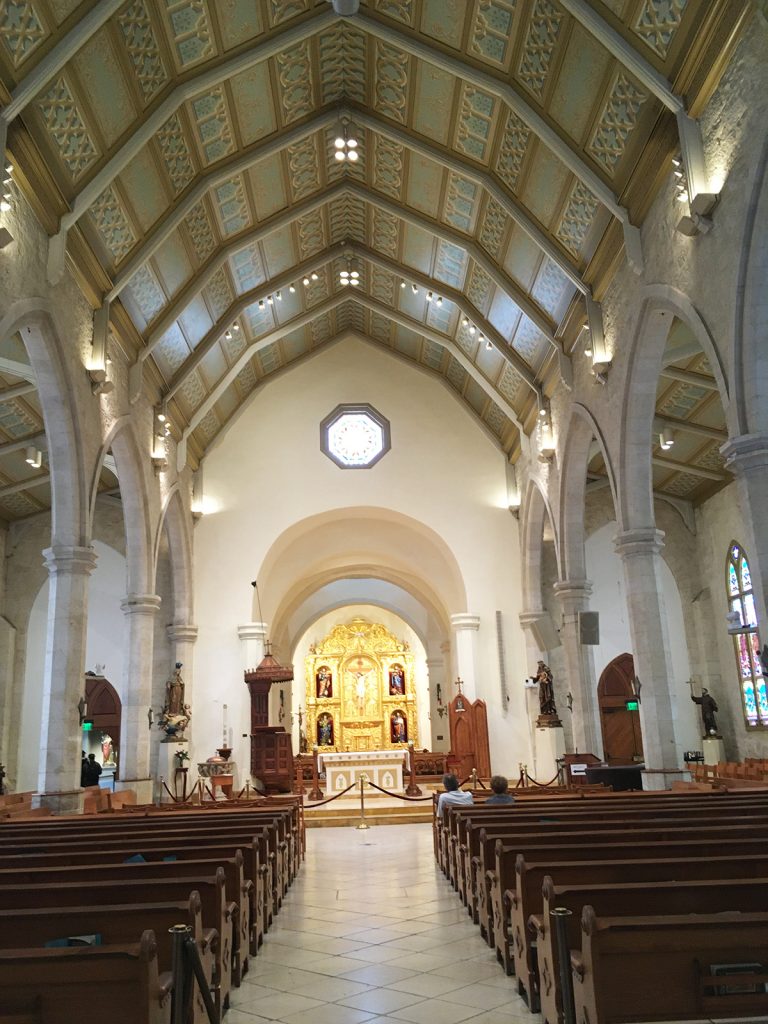 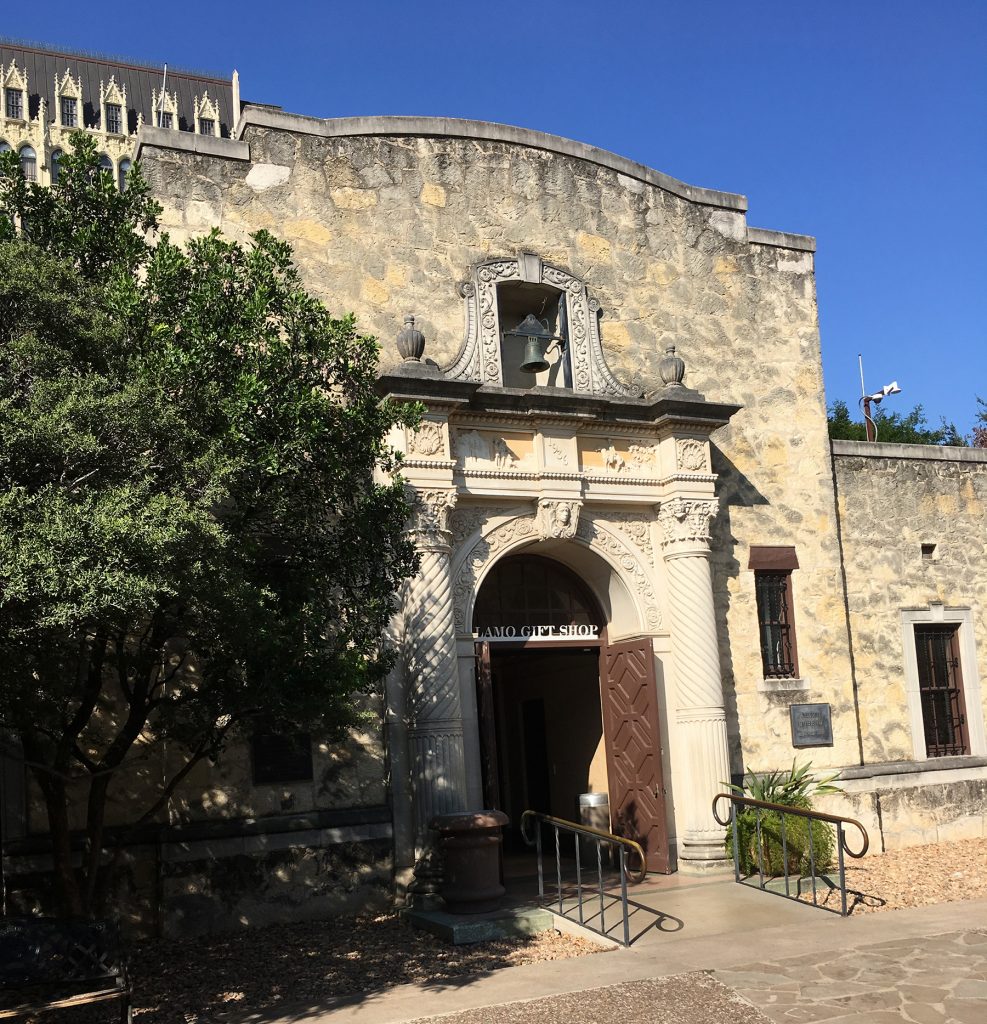 Today, The Alamo is definitely a touristy spot with much of the history barricaded or interrupted by surrounding streets and traffic. Starting next year, that is going to change. A large preservation and expansion project will get underway with a world class museum planned to house a “priceless” collection of Alamo and Texana artifacts donated to the Texas General Land Office, guardian of the Alamo on behalf of the people of Texas, from popular 1980s singer Phil Collins.

The Alamo is something to see, though, even now with so much of it in need of repair. 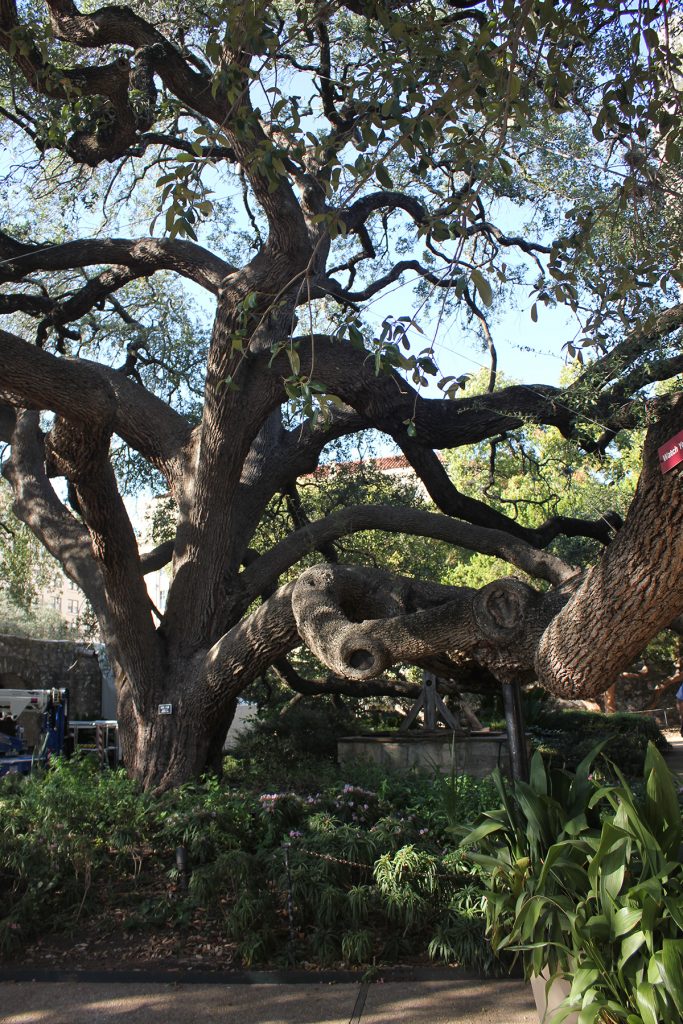 I was impressed with this tree that grows behind what was once the long barracks. Walter Whall,  a retired English seaman, started San Antonio’s first tree moving company, proving a full-grown tree could be transplanted. In 1912, he transplanted a 40-year-old oak tree to The Alamo. Today, it’s wide base and gnarly limbs provide welcome shade to those wandering along the footpaths around it.

To me, the tree became a spot of historical significance on a personal level.

In 1941 in the days before America joined World War II, my dad’s great-uncle invited him to go on a trip from where my grandparents lived in the panhandle of Oklahoma to Texas. Dad was excited to go on the trip and spend time with his uncle who, from the stories I’ve heard, was quite an interesting character. His uncle bought Dad a hat and a pair of boots that he was so incredibly proud to show off.

Dad doesn’t recall exactly where this photo was taken, just that it was on the trip, but he remembers quite well the details of the trip, including going to see The Alamo. He talked about sticking his fingers through the holes in the church wall, created by bullets, and how dark the long barracks seemed (which you can imagine and experience in the Battle for Texas Experience located across the street from The Alamo in the bottom of the River Center Mall).

And as I stood there, looking at that big, old oak tree, I could so clearly picture my dad standing there as a boy, staring at it, too.

So, as a tribute to my dad, the first thing we did after we checked into our hotel, was rush over to The Alamo and take a photo with my pant leg stuffed in my boot, just like Dad did all those years ago. In the background is the oak tree. In my heart is a joy that I could experience something that made such a lasting impression on my father that he still talks about it with great happiness 78 years later.