Harriett Quimby was born in May 1875 on a Michigan farm.  She was in her early teens when the family moved to San Francisco. With dreams of becoming an actress, she was listed as one in the 1900 census.

She began writing for magazines.  In 1903, she moved to New York City and became a theater critic. Reportedly, she even authored a few screenplays that were turned into a silent films.

Harriett eventually turned to photojournalism as a career and leaned into adventure and excitement. She enjoyed travel, theater, and automobiles. In 1906, after a ride on an automobile racetrack, she bought her own car. At that time, it was unheard of for a woman to do such thing.

Through her journalism work, she covered an aviation tournament at Belmont Park in 1910. Harriett was friends with siblings John and Matilde Moisant. John ran a flying school and produced his own monoplane. Harriett enrolled in the school, along with Matilde. In  the summer of 1911, Harriett became the first American woman to be licensed as a flyer by the Aero Club of America, the U.S. branch of the Fédération Aéronautique Internationale. A few women had flown before her, but none at that time were licensed.

Tall and energetic, Harriett was hard to miss, especially when she created a flying costume that became her trademark. She wore a purple satin jacket and matching riding pants with high laced boots and a soft cowl around her head.

Seeking more excitement, she went on the barnstorming (a form of flying in which stunt pilots performed tricks, either individually or in groups called flying circuses) circuit where she became quite popular.

In the spring of 1912, after weeks of preparation, she traveled to England to purchase a Bleriot airplane. She borrowed one in Dover, England. Early on the morning of April 16, Harriet became the first woman to fly across the English Channel, landing in France.

Unfortunately, just a few hours after her history-making flight, the world discovered the tragic news of the Titanic sinking the previous day and poor Harriet was obliterated from the headlines.

She returned to America and barnstorming, joining in several air meets. On July 1, 1912, she was paid handsomely to participate in an air show near Boston. In front of the gathered spectators, her plane lurched, throwing her lone passenger to his death. Although she struggled to gain control, Harriett was also thrown from the plane and was killed.

Harriett had been a pilot less than a year, but her impact on the aviation industry, particularly for women, continues to this day. 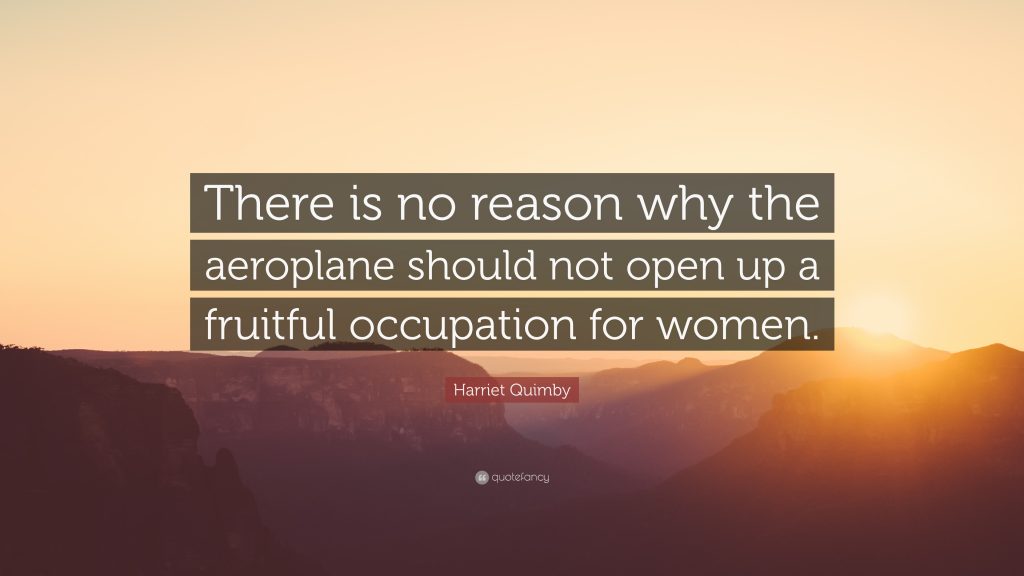 You can read more about her impact on my fictional characters in Quinn (Pendleton Petticoats Book 9).

He’s fighting a battle to win her heart…

There’s nothing typical about Quinn Fairfield. The outspoken suffragette spends her days writing sensational headlines as a newspaper reporter and indulging her natural curiosity. She’s much more likely to be found riding a bicycle around town than learning the social graces at which her sister, Caitlyn, excels. When Caitlyn announces her plans to wed a man Quinn doesn’t trust, she sets out to find a reason to break up the happy couple. In the process, she finds herself falling for an intriguing, kind-hearted man.

After spending several years in Portland at college, Walker Williams returns to Pendleton, eager to make his mark on the world. He’s determined to become a legendary architect despite the challenges that arise from his upbringing on the nearby Umatilla Reservation. When a feisty red-headed newspaper reporter catches his eye and captures his heart, Walker fights his growing feelings for her. He’ll do anything to shelter Quinn from the prejudices aimed at him and his heritage.

Can the two of them overcome their fears, set aside the burdens of the past, and surrender to the sweet romance blossoming between them?

Filled with laughter, adventure, and historical tidbits from 1912, Quinn is a sweet historical romance brimming with hope and love.

You can find Quinn on Amazon: http://a.co/2MX4ewF